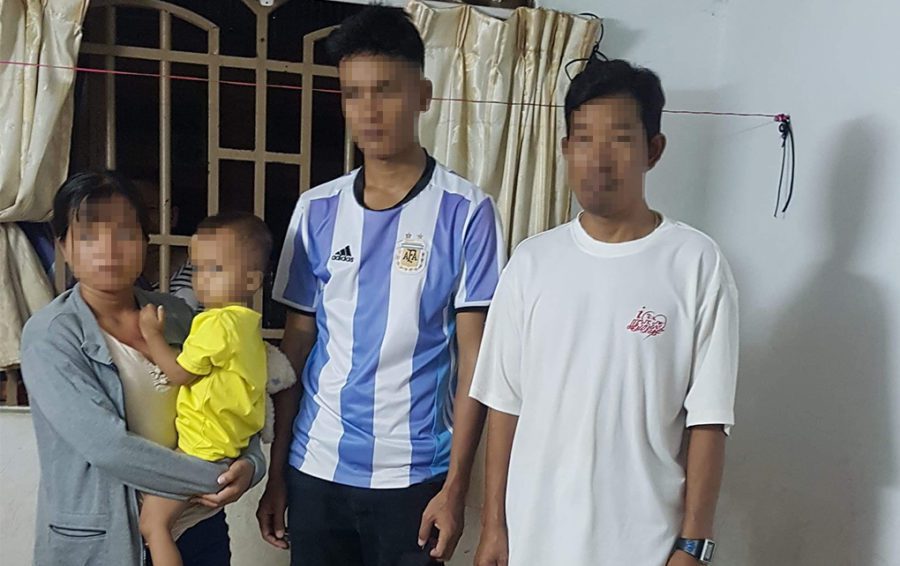 The four Montagnards sent back to Vietnam on Friday morning. Image: Supplied

Four Montagnard ethnic minority asylum seekers were sent back to Vietnam by Cambodian officials on Friday, leaving nearly 30 others remaining in stateless limbo in Phnom Penh.

A representative of the ethnic minority group said three Cambodian officials escorted four Montagnard asylum seekers from their residence in Phnom Penh’s Choam Chao District at 5 a.m. to be sent back to Vietnam via land transportation. The group of asylum seekers had left Vietnam for Cambodian in 2015 out of fear of persecution for their Christian religious practices and their role assisting U.S. military during the American-Vietnam war.

Keane Shum, spokesman for the Bangkok regional office of the United Nations High Commissioner for Refugees, confirmed four individuals in Cambodia were returned to Vietnam. Shum said three were assessed as not being refugees, while the fourth asked to return.

Tan Sovichea, director of the Interior Ministry’s refugee department, declined to comment on the case. Another Interior Ministry official responsible for receiving refugee applications, Houl Samrith, said he had not heard any new information about the Montagnards.

The Montagnard group representative said the fourth member of the group sought to return because he was sick. The group, which also includes a woman and a two-year-old boy, came from Vietnam’s Dak Lak and Gia Lai provinces and were “very sad” to go, the person said.

Once the fourth man requested repatriation to Vietnam, the family of three who were denied their asylum claims said they were prepared to return with him, said Denise Coghlan, director of Jesuit Refugee Services, which has funded and assisted the Montagnards in Phnom Penh.

Coghlan said the Cambodia government had deemed the family to not be refugees but let them stay as the woman was “very pregnant” at the time of the decision. “I might have wished the family had stayed, but the government didn’t do anything against the law,” she said.

JRS does not have operations in Vietnam but Coghlan said that the organization would try to maintain contact with the four individuals in order to see how they fair upon returning.

The Montagnards in Phnom Penh, also known as Degar, hail from Vietnam’s Central Highlands, though the term “Montagnard” is used for indigenous groups from the mountains of Cambodia and Vietnam. Groups once again began crossing into Cambodia through the forests in 2015, with reports of more than 200 seeking asylum from Vietnam.

Cambodia initially considered granting asylum to some but Interior Minister Khieu Sopheak in 2016 said they did not qualify as refugees because they entered the country “illegally.” By the Interior Ministry’s count, 140 Montagnards had been returned from Cambodia to Vietnam since they began crossing into Cambodian through the forest in 2015.

During that time, the Cambodian government and U.N. claimed they sought to return to Vietnam, but the returning Montagnards interviewed by journalists said they were forced out of Cambodia. Coghlan said that she hopes the four returning Montagnards are able to contact those who have already returned and report back on their status, as JRS has no office in Vietnam and has only received scattered information.

“Sometimes [the returned Montagnards say] things are very tough for them and sometimes things are going fine,” she said. “Some have reported that families are in jail, but that’s just what they report, I have not been up there to see.”

The Cambodian government’s threats to send Montagnards to Vietnam drove more than 50 asylum seekers into Thailand in 2017. The departures slowed by the end of 2017 and no one had been removed from their house in Choam Chao district since then, the representative of the group said. Police presence at their residence increased to 10 guards at times in 2018, according to previous reports, but the representative said that only one police officer stood guard after authorities left on Friday.

During a crackdown on foreign residents in Cambodia in the first half of 2018, Sovichea, the refugee department official, said that the 29 Montagnards who remained in Cambodia would be returned to Vietnam. However, both the Montagnard representative and Coghlan said there were 28 people living in the residence after the four left on Friday.

Despite the 2018 reports, Coghlan said the Montagnards who remain are all recognized as refugees and have been living in a guarded house — but with limited freedoms including English-language courses, short trips to the market and opportunities to play football outside.

They could be transported to another country or granted citizenship in Cambodia, though she thought it was “unlikely” the government would consider citizenship.

“Seeing that some have been there for four years, I would like to see them have an opportunity at a new life,” Coghlan said.