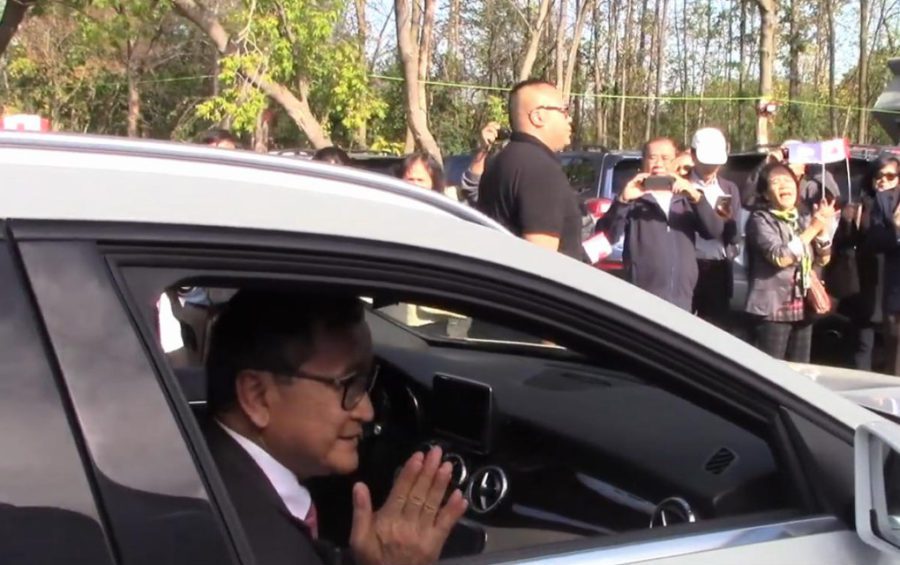 Sam Rainsy visits supporters in Montreal this week, in a video shared on his Facebook page.

Four more supporters of the banned opposition CNRP were charged for “plotting an attack” over their public backing of exiled CNRP leader Sam Rainsy’s planned return to Cambodia, which the government has branded a coup attempt.

The Pailin Provincial Court charged the four over various expressions of support for the promised return in November of Rainsy and other senior CNRP leaders living abroad. The court noted actions including gathering supporters, sharing articles on Facebook and speaking to the media, according to a court statement dated Tuesday and seen by VOD on Wednesday.

Ven Dara, 60, was charged in relation to giving an interview to Radio Free Asia (RFA) in August 2019, the statement said.

Chhun Sithy, 40; Khin Pon, 64; and Huy Huon, 68, were charged for “providing a place for gathering, and sharing information on Facebook, including articles in a way to persuade and encourage the public to participate in a plan to overthrow the government of Cambodia, with the outlawed rebel group under the guise of the plan of the criminal Sam Rainsy to return to Cambodia.”

“Those involved or who support or participate in implementing the plan to hold a coup d’état will face the charge of plotting and be sent to the court to be punished by law,” a court spokesman said in the statement.

The four, who face up to 10 years in prison if convicted, are in hiding, according to CNRP youth activist Rin Roath.

Prime Minister Hun Sen said in a speech on Wednesday that being involved in the campaign to welcome Rainsy’s return is an illegal act that has to be prosecuted.

Rainsy, who has lived abroad since 2015 to avoid a number of court convictions, has dismissed government claims that the CNRP is planning a “coup” or “color revolution” and instead calls his planned November 9 return part of a nonviolent “people-powered” movement to force Hun Sen’s resignation.

In a Facebook post on Tuesday, Rainsy said that many Cambodian Canadians had recently welcomed him in Montreal and donated to a fund to support defecting soldiers who Rainsy has said he expects to join him and other CNRP leaders, as well as returning migrant workers, when they re-enter the country.

“They generously contributed to the Special Fund to financially support the patriotic armed forces who will defect from the Hun Sen regime to stand with the uprising people” on November 9, the post says.

About 30 members or activists of the banned CNRP have been arrested and detained this year in relation to their support for Rainsy’s return.

More than 150 others have been summoned for questioning by police or the courts and two CNRP supporters were assaulted by unidentified men wearing motorbike helmets in daylight drive-by attacks in Phnom Penh.

On Tuesday, Dong Sovannarith, a former CNRP youth group leader in Kampong Cham province, was arrested by police officers at his home and charged with plotting for gathering people and taking a photo with raised hands as a sign of support for Rainsy, the provincial court said.

Ny Sokha, head of rights group Adhoc’s human rights unit, said that court charges against people who have only expressed themselves were serious rights violations and went against Cambodia’s constitution.

“All people’s expressions, even if they are agreeable ideas, opposing ideas or critical comments, all of those are within the circle of people’s freedom of expression,” Sokha said.

“We cannot make people’s expressions an offense because, in principle, our law guarantees the people’s freedom of expression,” he said.

When authorities punish due to speech, “we consider this a restriction on freedoms,” Sokha added.

National Police spokesman Chhay Kim Khoeun said the recent arrests and charges were made based on the law and the facts.

He added, “The country has peace and coming to oppose it like this, is it also freedom?”