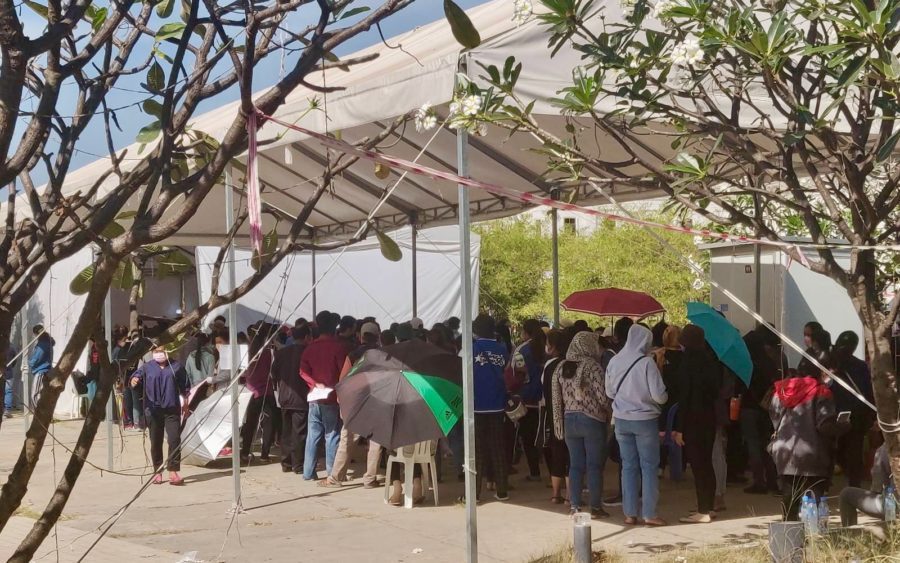 They come after the arrests of at least two protesters on Saturday.

Casino workers have been protesting almost every day since December 18 in relation to mass layoffs last year that they say targeted unionists.

On Friday, the Health Ministry ordered all protesters to be tested for Covid-19, but the protesters resisted until late Saturday afternoon, with some saying health measures were being applied inconsistently to suppress the protests. Health officials told the protesters that they would have to self-isolate at home even if they tested negative.

Some 255 workers were tested on Saturday — leading to four positive tests, according to the workers — and testing resumed at 9 a.m. on Sunday.

Only a small handful of workers turned up in the morning, but about 200 workers were waiting for tests around 2 p.m. at Phnom Penh’s Koh Pich island.

According to the union, six unionists were detained by police after leaving the testing site on Saturday, with three of them released later that night.

Police confirmed only two of the Saturday arrests, while posting an image online of the Covid-19 Law’s Article 11 — a crime of obstructing measures that can be punished by six months to three years in jail, or two to five years if it leads to infections or serious public health impacts.

San Sokseyha, a Phnom Penh police spokesperson, said the police were only implementing court orders but would not say what the four workers had done to break the Covid-19 law.

“As I have said, as the authorities, we follow the law and court orders. Whenever, there is an order for any individual, we will follow the legal procedures,” he said.

The Covid-19 Law was passed last year amid criticism from human rights groups around its “draconian” punishments.

Other unionists in the NagaWorld protests have previously been arrested since New Year’s Eve, when authorities rounded up 10 suspects, later releasing four. Three others, including union leader Chhim Sithar, were also later placed in custody, though one of them received bail.

Updated at 5:20 p.m. to include comments from a police spokesperson.