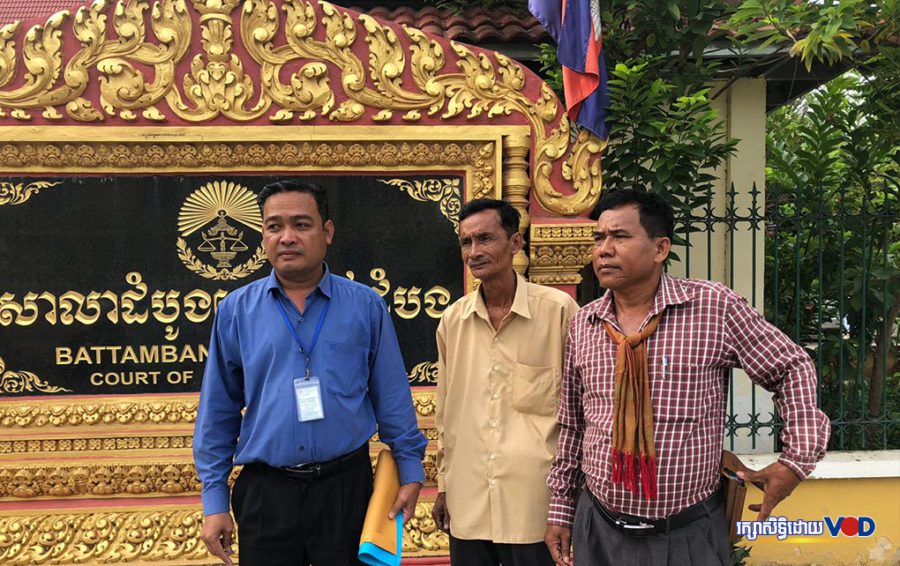 Lawyer Som Sokong, left, and former CNRP officials arrive for questioning at the Battambang Provincial Court on the morning of May 8. (VOD/Pich Chamrong)

Four more former opposition commune officials were questioned at the Battambang Provincial Court on Tuesday about meeting at colleagues’ homes for meals, the latest in a series of interrogations against 35 members of the dissolved Cambodia National Rescue Party (CNRP).

In its three weeks of questioning so far, the interrogations have focused on the CNRP officials eating noodles together and posting photos on social media, allegedly violating the Supreme Court’s 2017 order dissolving the party and removing its officers from their positions in local government.

Defense lawyer Sam Sokong told VOD that the four questioned on Tuesday were asked about photos they took in July last year at the homes of colleagues, including former commune chief Sin Chanpeau Rozeth and provincial party president Chea Chiv.

The photos, in which the gathered CNRP members raised their arms, were posted to social media, he said.

“It is not a violation of any components of crimes as stated in law,” said Sokong. “It is a restriction of the rights to gather and to [free] expression, and the right to participate in political life.”

Of the 35 former CNRP officials summoned by deputy court prosecutor Keu Bunnara, 26 have given their testimonies, while the remaining nine are scheduled to be questioned on Friday.

The United Nations’ human rights office issued a statement on Tuesday expressing concern over the questioning of former CNRP officials. In addition to the court questioning in Battambang, at least 38 others have been questioned by police in Kompong Thom, Kampot and Banteay Meanchey in recent weeks.

“There is a need to change the political culture to one that focuses on issues rather than persons,” the statement quoted Rhona Smith, the U.N.’s rapporteur on human rights in Cambodia, as saying. “This, together with judicial protection of freedom of expression, would help overcome the challenges of the current political situation for the benefit of all Cambodians.”