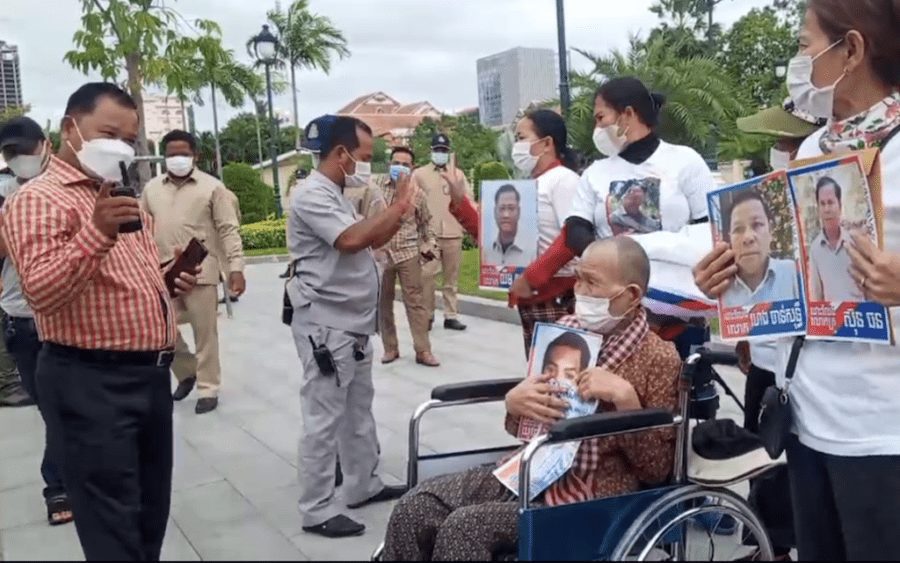 Several family members of jailed opposition politicians staged a small rally outside the U.S. Embassy on Friday, aiming to bring attention to the country’s political prisoners.

Around seven to 10 women held up banners outside the embassy in the morning after submitting a letter to the U.S. delegation demanding the release of their husbands and relatives. Daun Penh district security guards once again broke up the gathering, citing Covid-19 precautions, after some shoving between protesters and authorities.

Prum Chantha, the wife of jailed CNRP activist Kak Komphear, brought her son’s grandmother in a wheelchair to the protest, and was seen telling the security guards to let them protest.

“We’re asking for just a moment. We are all the same Khmer. Don’t restrict my rights,” Chantha said.

Her autistic son has also been jailed over insulting officials and incitement over his online activities. U.N. rapporteur Vitit Muntarbhorn and others last week called for the 17-year-old’s release, saying “[t]his case is particularly disturbing because the UN Convention on the Rights of Persons with Disabilities — to which Cambodia is also party —  requires authorities to consider the best interests of children with disabilities and provide appropriate assistance.”

“We are extremely concerned that the child was interrogated without a lawyer or his guardian, which violates the Cambodian Law of Juvenile Justice and international human rights standards,” the U.N. representatives said.

On Friday, guards spoke through loudspeakers that the protesters would be quarantined for 14 days if they did not maintain 1.5 meters between them. The gathering disbanded around 10:30 a.m.

Theang Sovanna, wife of CNRP activist Chhum Puthy, who was jailed last August protesting for the release of detained unionist Rong Chhun, said the women had submitted their letter around 9 a.m.

“We’re just calling on the U.S. ambassador to help to release political prisoners and allow them to do politics because they are innocent. We hope he will help to ask the government to drop the charges,” Sovanna said.

The “Friday Women” protests have been ongoing on and off for around a year, with several of the opposition-linked women protesters arrested and charged for their activism.