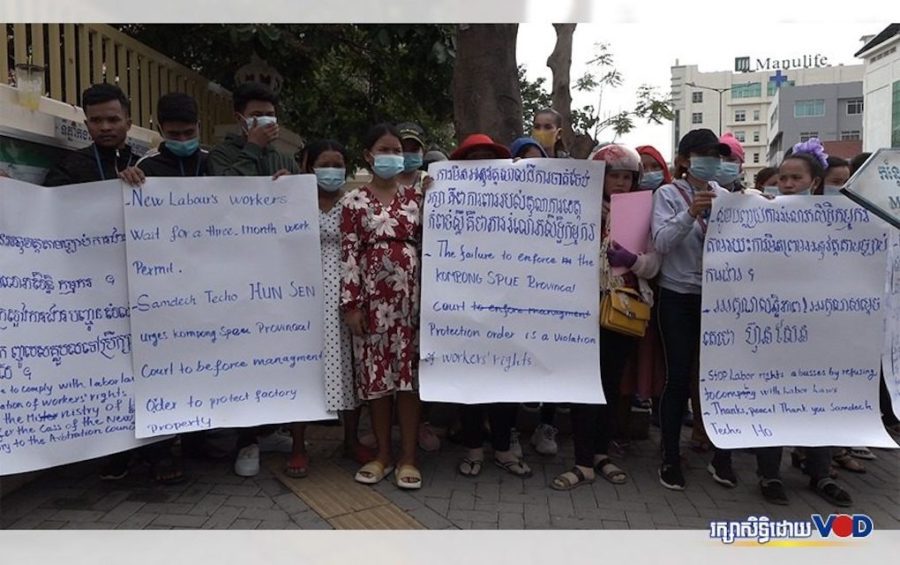 Employees of the New Best Global Textile factory in Kampong Speu province protest at the Labor Ministry in Phnom Penh on June 29, 2020, calling for compensation and other benefits. (Hy Chhay/VOD)

Employees of the New Best Global Textile factory in Kampong Speu province urged the Labor Ministry on Monday to compel the company to compensate workers as they said the factory building’s owner had already rented out the property.

Some 40 representatives of the factory’s 763 employees gathered in front of the Labor Ministry in Phnom Penh, holding banners and petitioning the ministry to push the factory to provide workers unpaid wages and other compensation.

Nil Sam An, a supervisor at New Best Global Textile for three years, told VOD that workers had sought intervention from the Kampong Speu Provincial Labor Department since the employees were suspended and the factory owner allegedly left the country.

Sam An said workers had asked for the department to refer the dispute to the Arbitration Council, but she felt that local officials were ignoring workers’ concerns.

The provincial court issued an injunction order, seen by VOD, to stop the company from removing manufacturing equipment from the factory while the dispute was ongoing, after workers had filed a complaint. New Best Global’s owner had reportedly disappeared, and the owner of the building started removing equipment from the factory in March, which could be used to pay workers’ salaries, Sam An said. The supervisor called it an injustice against workers.

“The court already issued an injunction order, but they did not close the doors of the factory to keep the equipment to be auctioned off” in order to pay compensation for workers, she said. “The court instead let the [building] owner bring out equipment and rent the building to a new boss. They only issued an injunction order but did not enforce it.”

A company staffer reached by phone declined to comment on Monday.

As the pandemic-driven global economic downturn has sent consumer demand plummeting and led to fewer orders from international buyers, the garment industry has seen hundreds of factory closures and the loss of hundreds of thousands of jobs this year.

She said that the factory’s owner had originally suspended workers for one month and then disappeared in March. The workers were concerned that they will lose their chance of receiving compensation in line with the Labor Law if the building owner removes New Best Global’s equipment, Tola said.

“We struggle to accept [the settlements] because at first the owner told us that we would be suspended for one month, but then they closed the factory without informing us,” she said. “The owner had run away, [but] there is still more equipment, such as hundreds of sewing machines and other equipment, that can be sold to settle for the workers.”

Tola said the union has petitioned the Labor Ministry three times this year.

The workers did not provide an estimate of how much money they were requesting from New Best Global for its 763 employees in total.

Tola said she spoke to a Labor Ministry official on Monday — only identified as Vannak — who accepted the workers’ petition on behalf of the ministry, but he could not be reached for further comment.

According to a letter from the Kampong Speu Provincial Court, the factory had initially filed for a one-month worker suspension from February 11 to March 11, but the provincial labor department received notice on February 14 from an administrative director that the New Best Global owner’s whereabouts were unknown.

Vong Sovann, deputy director general of the ministry’s Labor Dispute Department, said that the provincial labor department had previously offered a compromise, but workers had declined it.

Choek Borin, director of the Kampong Speu labor department, said the factory building owner tried to offer workers a settlement in lieu of the factory owner, offering to pay wages for workers’ eight days, 10 days’ pay for work suspension and a year-end bonus, but workers also declined this offer.

The provincial labor official claimed that the workers were being incited by union leaders to demand more compensation after the factory suspended operations.

However, Morn Channa, an officer with the Cambodian Alliance of Trade Unions, which is monitoring the dispute, said workers needed to be paid what they are owed under the Labor Law when a factory ceases production without warning.

“Workers have lost benefits that they should have gained according to the law,” Channa said. “We are still pushing this case, but [the Labor Ministry] keeps [ignoring] our case and [we] don’t know their intention.”

New Best Global Textile is owned by a Taiwanese national, according to the Garment Manufacturers Association in Cambodia’s website. The factory supplies to international retailers Primark and Walmart, trade website Import Genius shows.