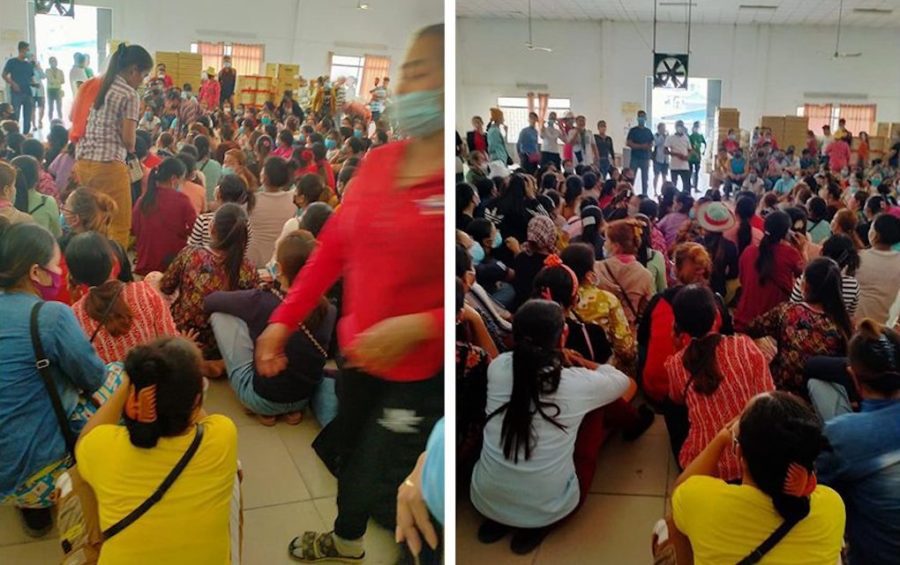 Nearly 1,000 garment workers protested outside a Phnom Penh factory on Wednesday after the owner failed to pay their regular wages, which the company said was due to declining payments from buyers during the ongoing Covid-19 pandemic.

The factory owner refused to sign an agreement promising to pay workers their outstanding wages at the beginning of next month, as workers had asked, Sopha said.

“Workers will continue their strike to force the company to respect the condition to pay workers regularly from today onward,” she said.

“Workers asked the company to make a written promise with them but the company did not dare to make a contract with us,” she added. “The company just gave excuses for this and that”

Sopha said the factory had been paying workers irregularly for the past four months. She said the factory’s owner was Chinese, but the company listing on the Garment Manufacturers Association in Cambodia lists the owner as Malaysian. The company employs 935 workers, according to GMAC.

Kim Bou, head of administration at the factory, said the company has lost buyers during the global economic slowdown resulting from the spread of Covid-19, a new respiratory disease that was first detected in China in late December.

Bou said Canteran was facing a financial crisis and thus could not pay workers on time, but he said the company was trying to find funds to pay workers’ salaries.

“The company faces difficulties with the market, and buyers have also delayed transferring their payments because of the Covid-19 issue,” he said. “Our company tried very hard to find a solution for our workers. However much money we have, we will pay with that and the owner will keep paying till they get full wages.”

The Health Ministry has confirmed 96 total infections in the country since January, as of Thursday evening, with 10 people recovering from the virus.

Sopha told VOD that workers said they will face difficulties managing daily expenses, such as rent, utilities, children’s school fees and bank loans if their employer does not pay their full, regular wages.

Pav Sina, president of the Collective Union Movement of Workers, said the company is violating the law by not paying workers their full wages.

Sina said the Labor Ministry should find an immediate solution to help workers who are struggling with their expenses.

“We cannot let the employers give excuses to delay paying workers’ wages, because workers are in debt and they cannot make an excuse to delay their expenses,” Sina said. “If [workers] cannot pay debts on the right date and time, they will be fined.”

Peng Phoeun, deputy chief of the Labor Ministry’s labor disputes bureau, could not be reached for comment.