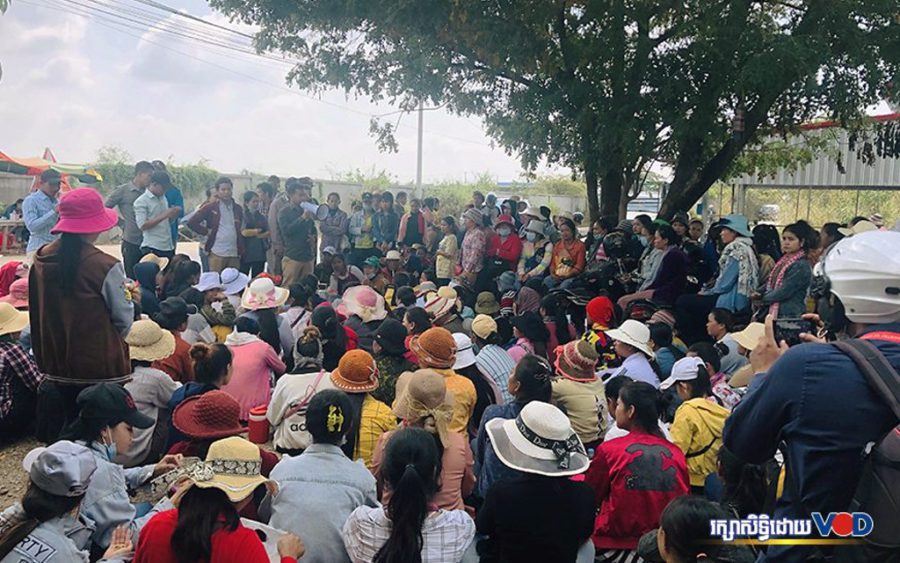 After more than a week’s protests, about 500 garment workers in Kandal province agreed to return to work on Wednesday after authorities helped settle the dispute, union representatives said.

The workers, from glove factory Sees Global in Khsach Kandal district, have been protesting for about 10 days, claiming the factory’s Korean owner closed the business without giving proper compensation to employees, despite having opened a new factory.

One of the workers, Phuong Sothea, on Monday said the workers attempted a march from Kandal province to Phnom Penh to petition Prime Minister Hun Sen to intervene in the dispute, but were blocked on the way. The workers, some of whom had worked at the factory for up to seven years, were losing their seniority benefits, Sothea said.

“The owner wants to close the factory and open a new one, but did not inform the workers and wants workers to sign new contracts that void their seniority,” she told VOD on Monday before the protests ended.

Seang Rithy, head of the Cambodian Labor Solidarity Union Federation, told VOD that workers decided to stop protesting and would return to work on Wednesday after finding a compromise with the owner of the factory.

“The owner has taken responsibility by agreeing to give severance pay to workers in accordance with the new labor law by paying them every six months,” he said. The owner also agreed to give full wages for the month of December even though they had not worked.

Bun Nareth, head of administration at Sees Global, could not be reached for comment.

Vong Sovann, secretary-general of the labor dispute committee at the Ministry of Labor, said their research had found that Sees Global was neither bankrupt nor had closed its operations, and that the owner had merely changed the location to a new place.

Sovann said that after intervention from the Ministry of Labor and relevant authorities, the owner had agreed for the workers to return to work as normal at the new Sees Global factory, which is situated near the old factory.

“The factory is being operated as normal after we found a solution for them. [The owner] allows the workers to return to work tomorrow, December 25,” he said.

According to the Garment Manufacturers Association in Cambodia, Sees Global employed about 800 workers.