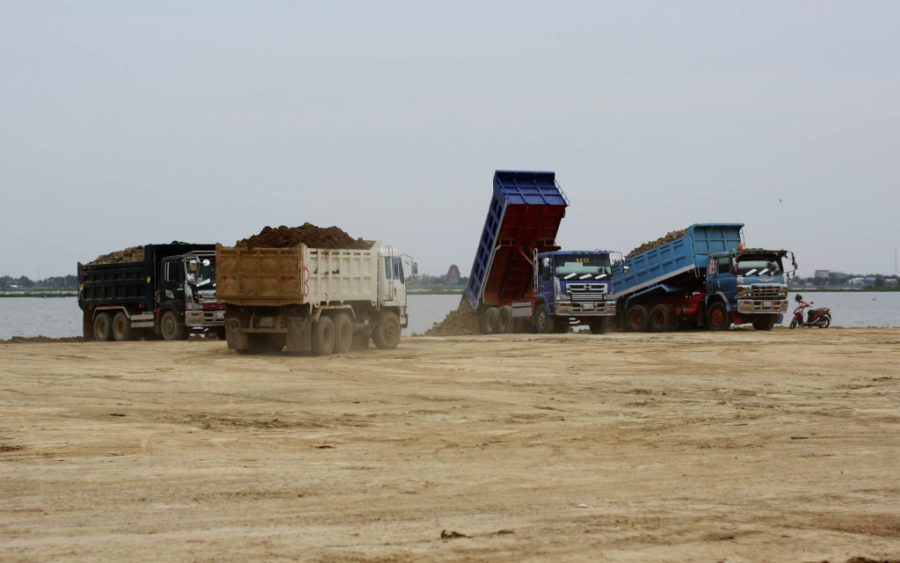 The government cut another 295 hectares of Boeng Tamok to private individuals, with some exchanged for city center land, raising the total area sliced from the natural lake to at least 880 hectares.

In a letter to three ministries and the Phnom Penh governor, Council of Ministers secretariat Ken Satha requested to cut 275 hectares of land from the 3,239.7-hectare Boeng Tamok Lake in Phnom Penh, transferring the area in Prek Pnov district’s Ponhea Poan commune from state public land to private ownership.

The letter, dated December 24, granted 196.6 hectares of that area to two individuals, Uy Borey and Kong Sothy, without explanation for the grant. The letter also did not explain what would be done with the nearly 80 hectares of the lake that were cut but not given to Borey and Sothy.

A separate letter from Satha dated December 23 cut and converted another 20 hectares of Boeng Tamok, granting it to Lon Hak and Chhun Chanthy in exchange for 1,571.2 square meters of land in Daun Penh district’s Srah Chak commune. The central Phnom Penh land will be used for a security officer base near the Council of Ministers building, which will be under City Hall management, the letter said.

Sothy chairs a Phnom Penh business called Ksim and is a former director of Bright Victory Mekong Petroleum Import-Export, according to Open Corporates data, but the other three individuals could not be immediately identified.

Satha could not be reached on Monday.

Water Resources Minister Lim Kean Hor said he was aware of this case and was involved in the decision to cut Boeng Tamok.

When asked how many hectares of Boeng Tamok will be preserved, Kean Hor asked not to comment in detail and referred questions to Phnom Penh City Hall.

He said that the government conducts studies to determine a lake’s usefulness to the city, but he did not provide details about the factors that are considered in this decision.

“If it is important, it will be kept but if it is not, the development could have been taken,” Kean Hor said.

The urban rights NGO Sahmakum Teang Tnaut noted in a 2019 report that Boeng Tamok’s southern shore prevents effectively floodwaters from the north from deluging the city center, though previous sub decrees indicate that pieces of that southern shore have been allocated for government developments and private individuals.

Phnom Penh governor Khuong Sreng could not be reached for comments, and city hall spokesperson Met Measpheakdey said he was busy.

Government spokesperson Phay Siphan said he did not know the specific reason for cutting the lake and exchanging land, referring questions to the institutions named in the letters.

“As a principle, in the procurement of cutting a state’s public land hand over to anyone, it is a concession or swapping with individuals, so there is always an inter-ministerial meeting,” he said.

“The Ministry of Economy and Finance only knows about the payment of taxes, but the management is up to the concerned ministries,” he said.

Equitable Cambodia executive director Eang Vuthy urged the government to reconsider plans to fill natural lakes because these lakes are important in reducing water floods in the capital, which he said are getting worse based on his own observations.

“Apart from reserving the water and maintaining the potential impact of flooding, the lake plays an important role in the livelihoods of hundreds of families living around it, who use the water for fishing and growing vegetables,” he said.

Vuthy added that Phnom Penh’s lakes would also be a great asset to the city’s beautification and people’s health if they are preserved.

“If we look at other countries such as Vietnam and others, the lakes in the center of cities, they are kept in full as a space for the city to have good air [atmosphere], and for their beauty.”

But between 2018 to 2020, a total of about 1,000 hectares had been cut and handed over to state institutions and private companies for the construction of buildings and infrastructure.

STT’s 2019 report said that all natural lakes in Phnom Penh are facing land filling, with 16 lakes filled since 1990 and another 10 partially filled.