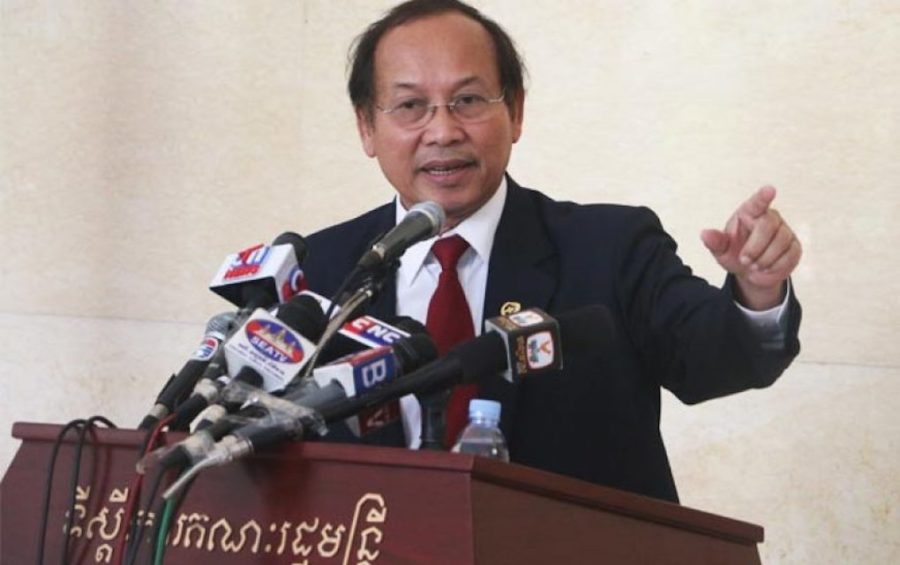 The dissolved opposition party has reorganized and raised funds in the U.S., a situation that amounts to U.S. support for a “terrorist movement,” government spokesman Phay Siphan said on Thursday, the morning after the new U.S. ambassador to Cambodia landed in Phnom Penh.

Siphan made the comments at his weekly press briefing, which was launched in recent weeks and has been used to criticize the U.S. and question NGOs, and this week also featured a professor and government adviser backing up the spokesman’s views.

“Why do we see that group as a terrorist group? Because, firstly, this group organized a terrorist organization on U.S. soil. Secondly, it collected U.S. money for illegal use in the terrorist activities that is the CNRP,” Siphan said.

The main opposition Cambodia National Rescue Party (CNRP) was dissolved in November 2017 after its president, Kem Sokha, was arrested over accusations of colluding with the U.S. to overthrow the government.

Rainsy, who lives in exile in France, last month promised to attempt a return to the country on November 9 and has called for public support. The party has also vowed to have funds available for defecting soldiers, and Rainsy has previously urged soldiers and rivals within the ruling party to stand up against the government, though he has denied calling for a coup.

The party frequently raises funds from the Cambodian diaspora in the U.S. and other foreign countries.

Siphan said since the organization was not registered in the U.S., it was acting secretively while plotting an uprising.

“Both the use of funds and its activities are not [disclosed]. They just do their activities secretly,” he said.

He added that under international law, Cambodia had the right to file a complaint against the U.S. for its support, but Cambodia would refrain because it regarded the U.S. as a cooperative partner.

Ros Chantraboth, a history professor and adviser to Prime Minister Hun Sen, said the U.S.’s tolerance of the CNRP contradicted its fight against global terrorism.

“If the United States keeps supporting Sam Rainsy’s terrorist activities, the United States does not respect the principle and its own words announcing that it will fight against terrorism around the world,” Chantraboth said.

A U.S. Embassy spokesperson declined to comment about Siphan’s statements, but confirmed that Ambassador W. Patrick Murphy had arrived in Phnom Penh on Wednesday night.

The ambassador looked forward to “presenting his credentials in the near future and engaging with government authorities, civil society, and other Cambodian stakeholders,” the embassy said in an emailed statement on Thursday.

Sophal Ear, associate professor of diplomacy and world affairs at Occidental College in Los Angeles, said Murphy was unlikely to forget about Kem Sokha, who remains under de facto house arrest, or democracy in Cambodia.

“He may, however, take a quiet approach and focus on the positive aspects of the U.S.-Cambodia relationship, like how many billions of dollars Cambodia earns in foreign exchange from the U.S.,” Ear said in an email.

While both sides may attempt to “reset the relationship” during a honeymoon period in which Murphy settles into his role, Ear said there would be no light between the ambassador and U.S. State Department.

In recent video statements, State Department spokeswoman Morgan Ortagus called the ongoing detention without trial of Sokha “baseless” and for charges against him to be dropped, as well as urged Cambodia to release “prisoners who have been arbitrarily or unlawfully detained.”

According to Ear, everyone in Washington as well as the ambassador knows that the Cambodian government’s actions are “inconsistent with democratic principles.”

Mu Sochua, the CNRP’s former vice president, told VOD that her party had no intention to fight against the government using arms, and noted that money collected in the U.S. was not from the state.

“The military and police [officers] who will lay down their arms when President Sam Rainsy and we return will be as civilians, not with arms — no longer as the armed forces, but as one that doesn’t want to see bloodshed, doesn’t accept orders from Hun Sen, who orders that Khmer blood is shed,” Sochua said.

The party’s fundraising targeted Khmer people who supported their country and democracy, she added.

Political analyst Em Sovannara said Cambodia could be justified in filing a complaint against the U.S. if it had evidence that the CNRP’s motives were violent.

“In general, terrorism is an armed movement that can destroy or cause impact to any politician or any state,” Sovannara said. “But as for the comment from the spokesman, I think he might not have the grounds upon which to make the accusation. If we have clear documents to prove [violence], we can submit a letter to the United States for clarification because we have an equal diplomatic relationship.”

Hun Sen has long labeled the CNRP as “terrorists,” particularly in relation to his political rival Rainsy seeking to restore the party from abroad following its dissolution.