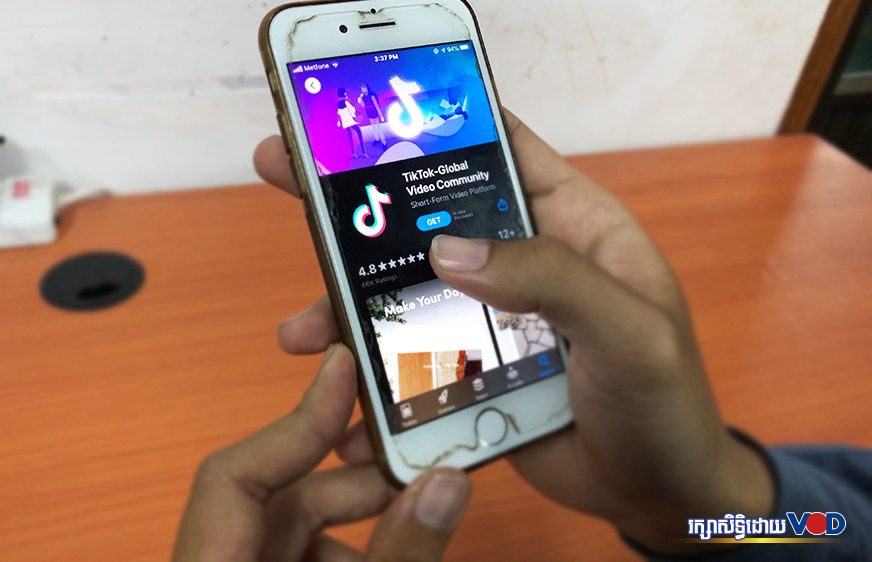 A man downloads TikTok on a phone. (Chorn Chanren/VOD)

In a statement, the ministry’s information technology department explained that “TikTok Entertainment is a short-video program that is popular among young Cambodians.”

But some people were using immoral words and gestures, spreading false information, damaging others’ honor or causing social unrest, the department said.

“In order to attract an audience, the TikTok users create impersonation videos or gesture comedy,” it said.

“Therefore, the information technology department of the general secretariat of the Ministry of Interior would like to remind the users of TikTok to stop the wrongdoing as mentioned above, because these actions can make you a perpetrator of a crime without being aware.”

The Information Ministry said last year that it had recorded 21 cases of incitement or insult on TikTok in September alone.

Police announcements and previous reporting show at least four TikTok arrests last year, and seven cases where users were brought in by police before issuing a public video apology.

The arrests include a man who denied the existence of Covid-19 in a TikTok video in April; 36-year-old electrician in Preah Sihanouk province who made death threats against leaders and insulted the king; a man in Battambang province who said “we will destroy Cambodia through TikTok” and laughed; and a user in Tbong Khmum province who said Angkor Wat doesn’t belong to Cambodia.

Among those who made public apologies at the hands of police are a 26-year-old man who added sounds of screaming to a video of Siem Reap authorities removing a house’s fence; a 29-year-old clothes seller who made a video of a 2-year-old appearing to tell people to eat eggs to prevent Covid-19; a woman who posted a video of a 2018 traffic incident claiming it was new; and a Tbong Khmum woman who claimed her father was a lieutenant general and had a gun.

Several TikTok users have mocked Prime Minister Hun Sen, mimicking his speeches or joking about some of his audacious promises, like visiting China as Covid-19 swept the country.

Others have taken to TikTok to warn others over their improper videos. Meas Polyvann, a Phnom Penh military police officer, said in an August video: “This is my last warning.”

“[I] am not giving you 48 hours; [I’m] only giving you 24 hours. You must remove all of them. Do you know that these are handcuffs or not? And these handcuffs are not for dogs but for human beings like your crazy group,” he said. “I will not give you any time, and your videos I will send to the Interior Ministry.”

“They use them wrongly while expressing their views to somehow impact the public order, social order and sometimes social security,” Sovann said.

Authorities worked to educate people as a first step, “but if they still stick to manipulation and taking advantage of it, we will start to take other legal measures,” he said.

The use of TikTok surged in 2020, and some people seemed to think it was less scrutinized by authorities, he said.

“We have seen that Facebook [use] has significantly decreased, but we have seen an increase for TikTok,” Sovann said. “Some leaders think TikTok belongs to young people and is not often looked at, so they take advantage of it.”

Chea Pov, director of the Interior Ministry’s anti-cybercrime department, said people seemed to be getting the authorities’ message.

“For impersonation and comedy, in fact, [we] have seen an increase,” he said. “But those people who impersonate illegally have been reduced because of our education.”