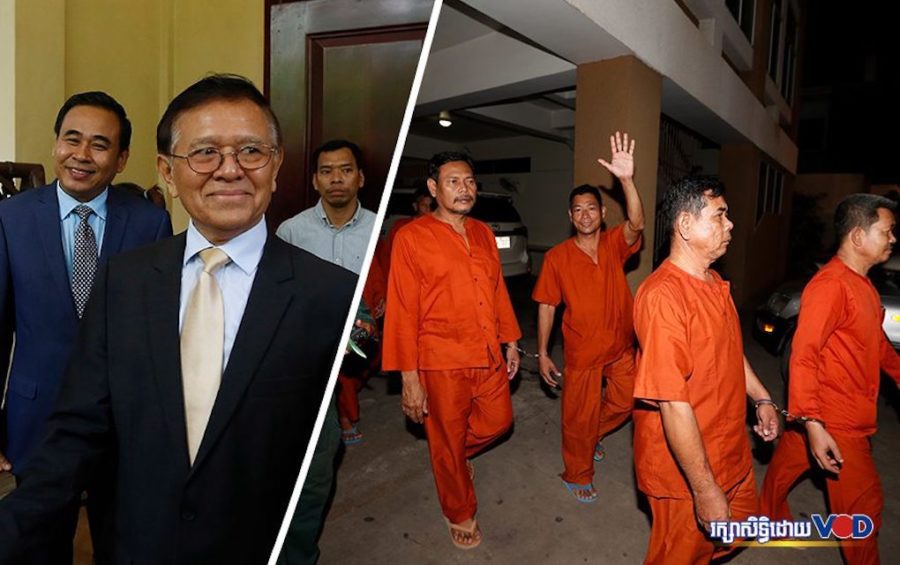 Kem Sokha greets reporters outside his home on November 11, 2019; CNRP activists are escorted outside the Phnom Penh Municipal Court on November 14, 2019. (Panha Chhorpoan/VOD)

The E.U. is asking too much — it’s pushing the government to break the country’s laws — so Cambodia will merely update the bloc about the easing of restrictions for on trial opposition leader Kem Sokha and other concessions, the governmental Human Rights Committee said this week.

The E.U. is currently reviewing Cambodia’s compliance under the “Everything But Arms” (EBA) deal, which gives the nation duty-free access to the European market, due to political and human rights concerns. In its preliminary report submitted to the government last month, the E.U. said the detention of CNRP president Sokha and dissolution of his party in 2017 were among “repressive actions” that appeared to violate international rights treaties.

The government’s reply, due this week, will explain to the E.U. about legal procedures so the bloc’s representatives can understand that Cambodia cannot fulfill “what the E.U. are forcing us to do against our laws,” said Human Rights Committee spokesman Katta Orn.

“Their requests are too much and goes against Cambodia’s rule of law, which cannot be acceptable,” Orn said. “Therefore, we will explain some more to the E.U. about these procedures.”

Sokha was arrested in September 2017 amid accusations of a conspiracy between the political opposition, civil society, media outlets and the U.S. to foment a “color revolution” and topple the government. The ruling CPP swept the July 2018 national election after the CNRP was dissolved.

Among updates that will be given to the E.U., the relaxing of Sokha’s court supervision requirements and the release on bail of several opposition activists will be noted, Orn said.

“The Interior Ministry has prepared a reply on the issues of freedom of expression, political parties, opposition activists,” he said. “For instance, some radio outlets are reopening and Kem Sokha is temporarily freed. These are recent cases that we need to add to our old report to explain to the E.U. so they can understand.”

Two U.S.-funded media outlets, Radio Free Asia (RFA) and Voice of America (VOA), have been tentatively approved to return to the airwaves after dozens of stations carrying their content were shut down in 2017. RFA will be required to stop calling the government the “Phnom Penh regime” and “Hun Sen regime,” phrasing used to suggest authoritarianism.

Interior Ministry spokespeople could not be reached.

Political analyst Em Sovannara said the government continuing to resist E.U. demands would likely lead to the loss of duty-free trade as well as investors.

“Consumers in E.U. countries might think differently about Cambodian people. They could boycott products imported from Cambodia, like the case of ‘blood sugar,’” he said, referring to a campaign highlighting violent evictions at sugar plantations partly drummed up by CNRP officials about five years ago.

Human rights violations on Cambodian sugar plantations have been part of the EBA review, with allegations that “large numbers of families were dispossessed and received inadequate or no compensation,” according to an E.U. report from March.

Phil Robertson, deputy Asia director for Human Rights Watch, said the concessions made by the Cambodian government in recent weeks did not amount to upholding political and human rights.

“The EU shouldn’t be fooled by Hun Sen’s release of opposition members without dropping charges,” Robertson said in a statement. “The EU should keep up the pressure until exiled CNRP leaders can safely return and the party can fully take part in a fair democratic process.”