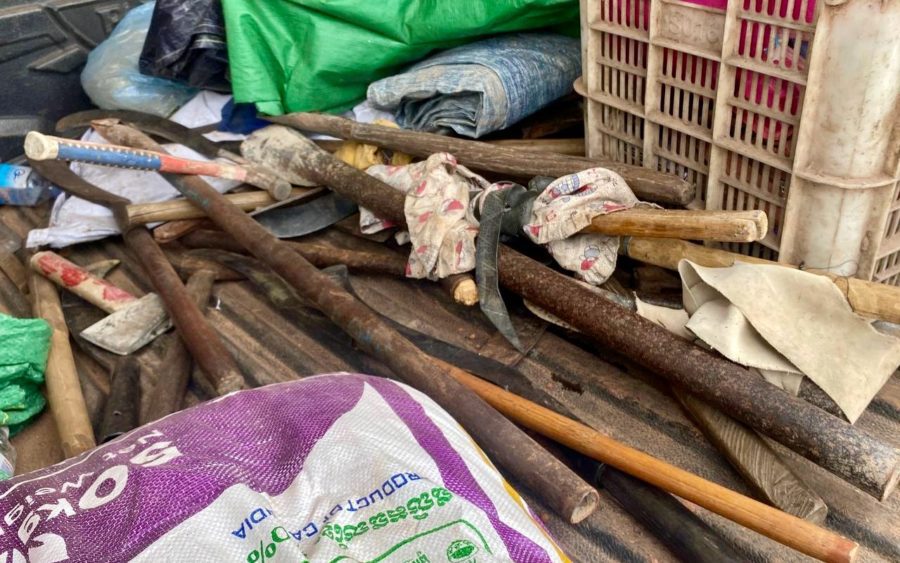 Authorities confiscated tools from a group of 300 people they said were attempting to claim land in Preah Sihanouk on March 13, 2022. (Preah Sihanouk Provincial Administration)

The Southern Cardamom National Park received a mob of nearly 300 people Sunday morning, arriving on “uncountable” motorbikes and tuk-tuks and armed with axes and hoes to cut down trees, according to police.

The arrivals to the Preah Sihanouk protected area were from nearby Kampong Speu province, and were likely provoked to try to claim land for themselves, officials said.

“All new knives and axes that hadn’t been used yet,” Soak Si said. “There were uncountable motorcycles and there were hundreds of them.”

Officials arrived at the scene to both stop them and try to figure out what was happening. Some of the people said they were from Kampong Speu’s Phnom Sruoch and other districts, Soak Si said.

The arrivals variously said they had followed one another and didn’t know who had organized it. They had brought food and gasoline with them and intended to each clear around 500 meters by 10 meters.

“It is difficult since they made different confessions from each other,” Soak Si said.

According to a statement issued by the Preah Sihanouk environment department, 295 people, including 113 women, had tried to encroach on the state land. The district led a force to stop the clearing around 11:30 a.m. Sunday, it said.

“The team cracked down and arrested 10 suspected masterminds and confiscated evidence,” it said, listing the seized tools including 5 kilograms of nails, 23 machetes, 18 axes and five hoes.

Environment provincial director Samuth Sothearith said on Monday the case was being processed.

Commune chief Hong Kea said people from other provinces like Kampong Speu follow one another from place to place clearing forests and moving on elsewhere. They come to claim the land and local officials struggle to deal with them, Kea said.

“We have not solved this yet, and another one will occur,” he said. “They believe that even if they lose, they will get money. And if they get land, they will incite other villagers to join them to claim [more] land and they believe that authorities cannot do anything against them.”