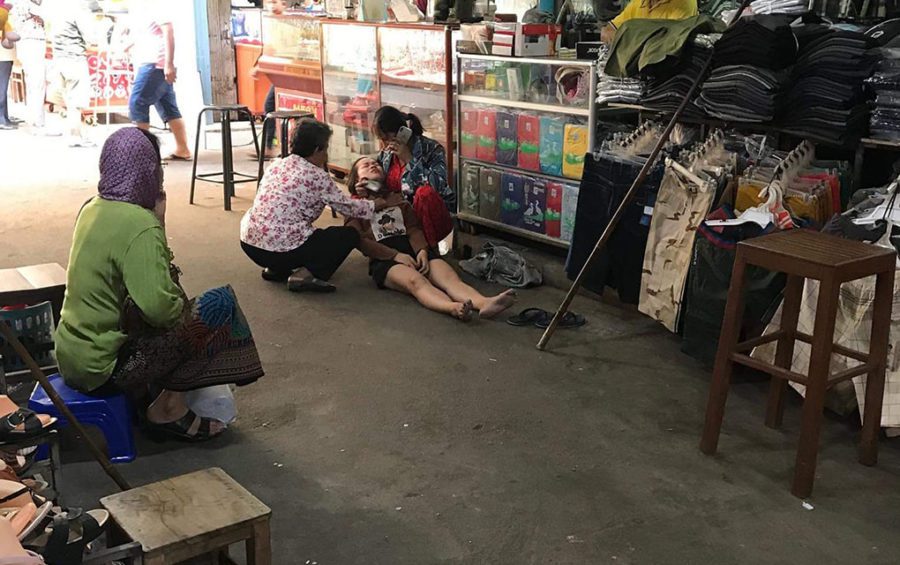 A woman faints in a market in Kampong Cham province, in this photograph posted to the Facebook page LY SokMal on March 8, 2020.

A senior Health Ministry official has urged citizens to assist rather than fear people who faint in public, noting that fainting is not a symptom of the respiratory disease Covid-19.

The ministry announcement came after videos and photos have recently circulated online showing people passed out in public spaces, which social media users have suggested were the result of Covid-19.

In one video, a man appears to be unconscious on the ground and then struggles to get up, while no one comes to assist him. A woman heard in the video shouts, “115,” the phone number for the ministry’s emergency health hotline.

Health Ministry spokeswoman Or Vandine told VOD on Tuesday that those who faint in public because they had other health issues were unrelated to the global outbreak. A person who is infected with Covid-19 would not collapse or convulse, as is seen in some of the videos posted on social media, she said.

Symptoms of Covid-19 infection include fever, coughing, shortness of breath and difficulty breathing, according to the World Health Organization (WHO). Fainting is not included among listed common signs of the virus.

In serious cases, infection can cause pneumonia, severe acute respiratory syndrome, kidney failure and even death, with researchers noting that most serious illness and deaths linked to the viral strain have been among older patients. About 80 percent of people infected with the virus recover without needing special treatment, WHO says.

Vandine urged people to assist those who faint in public and call 115, or 119 to call an ambulance. She said people can approach individuals to provide emergency help, but they should wear a mask and wash their hands with soap or alcohol-based hand sanitizer after touching someone who appears ill.

“Please, people should not panic and avoid helping those who have other health issues,” Vandine said. “What you can do to help is first, call an ambulance or a doctor. Second, you help them [while waiting for the ambulance]. Use face masks to avoid coughing, sneezing or inhaling dust. Third, when you help them, avoid touching your face and wash your hands with soap or [hand sanitizer].”

The ministry on Tuesday announced the nation’s third case of the novel strain of coronavirus. A British woman tested positive for the virus and is being quarantined in a Kampong Cham hospital, after she departed Ho Chi Minh City on a river cruise boat last week.

Two others, a Cambodian man and a Chinese man, have tested positive for Covid-19. The Chinese man recovered in February and left the country, while the Cambodian remains in hospital quarantine.

Pa Chanroeun, director of the Cambodian Center for Applied Philosophy and Ethics, said Cambodia is a nation of people who always help each other when they see someone faint or lose consciousness, but the outbreak of Covid-19 has made people afraid and hesitant to help due to fear that they could contract the virus from a sick individual.

Chanroeun said he would like to see people help each other. But even if they are concerned about the disease, they should not be disrespectful.

“If we cannot touch the victim directly, we should find a means to help a victim of fainting, rather than just taking a photo and posting it on Facebook,” he said.