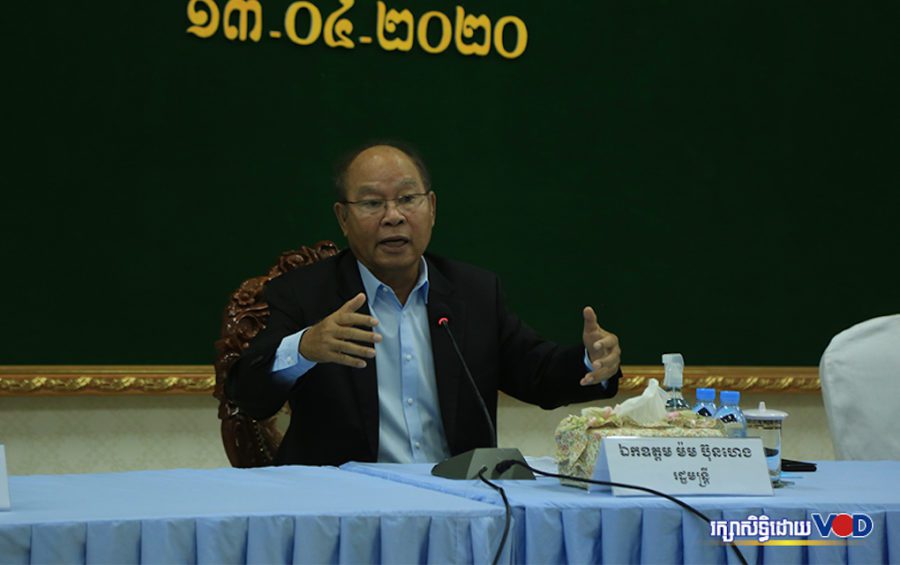 While most of Cambodia’s Covid-19 infections have been linked to foreign travel, the Health Ministry and World Health Organization have warned that the country could face community transmission and localized outbreaks, especially if authorities are not able to trace the virus’s spread.

With a recent cluster of infections found to have been transmitted within Phnom Penh, the ministry cautioned on Monday that people should change their hygiene habits while Covid-19 cases in Cambodia were still mostly linked to foreigners and Cambodians returning home after being abroad.

Health Minister Mam Bunheng warned during a press conference that infection rates could increase, and the country could report its first deaths connected to Covid-19, if people do not take preventative health measures to limit the spread of infection.

“We are worried about the possibility of spreading [the novel coronavirus] in communities that can lead to a high level of transmission,” Bunheng said.

The ministry was also prepared to issue a directive on quickly cremating or burying the bodies of people who die of Covid-19, he added.

No new Covid-19 infections or recoveries were reported on Monday, leaving the nation’s total cases at 122 and recovered patients at 77, according to a ministry statement.

But WHO remained concerned about the speed of the disease’s spread, the uncertainty surrounding the new viral strain and increasing demands on Cambodia’s health facilities and health-care workers should the nation face a wider community outbreak.

“We’re glad that a lot of preparation is ongoing but we have to do more,” Li told reporters.

“The top priority for us is really to prepare [for a] larger scale outbreak because Cambodia may also experience community transmission, if not now, but we have to prepare for the future,” she said.

Li raised questions about Cambodia’s current level of preparedness, including whether the nation has enough hospital beds to treat severe cases and enough hotels or other facilities to manage mild cases.

“More importantly, the health-care worker rapid response team needs to be expanded to do the more larger scale response,” Li added, explaining that WHO was working with the ministry and others to “make sure that we are better prepared.”

Bunheng said the nation had a supply of 200 ventilators.

According to the ministry, 8,909 samples have been tested for Covid-19 since the country began testing in January. The number of virus tests increased 54 percent since April 1, when the ministry reported that Cambodia had conducted 5,768 tests.

Ministry spokesman Ly Sovann estimated that the ministry had tracked about 2,200 people who had been in direct or indirect contact with confirmed Covid-19 carriers since January. The ministry is currently monitoring 266 people, including 86 who are under close supervision because they’re considered to have a high risk of infection.

Most of Cambodia’s confirmed cases have been tied to identified clusters of infections, including a group of French tourists and their guides in Preah Sihanouk, Cambodians and Malaysians who had attended a religious gathering in Kuala Lumpur linked to hundreds of cases in Southeast Asia, and tourists on a Mekong River cruise that traveled from Vietnam to Cambodia in March. According to Health Ministry statements, the virus also seems to have spread among a group including couples and others who knew each other in Phnom Penh.

Or Vandine, a ministry spokeswoman, said the ministry had identified at least 154 people who had been in contact with a group of at least five people who contracted the virus in Phnom Penh, the first of whom was reported as positive on April 7. There were 42 people within that larger group who were said to be at “highest risk,” Vandine said. Among them, one person tested positive, 39 tested negative and two others were awaiting results, she said.

“This is a fragile point,” Vandine told reporters. “If this spread keeps going on and we don’t have the ability to search for sources clearly, it will spread among communities.”

Some avenues for possible contact tracing remain unclear. The ministry on Sunday said that a Canadian man who tested positive for Covid-19 had worked in a casino in Phnom Penh, but a representative of NagaWorld — Phnom Penh’s sole licensed casino — told the Khmer Times that the company had no such employee.

Public health researchers warned since February that some Southeast Asian nations, including Cambodia, were likely to be undercounting the rate of infection within their borders.

Bunheng said the nation has 670 skilled doctors who are on standby to assist if infection rates rise. The Pasteur Institute in Phnom Penh is capable of testing up to 500 samples for Covid-19 a day, and the National Institute of Public Health can test an additional 100 samples, the minister said.

Based on the ministry’s latest testing figures, an average of 260 tests were processed each day for the past 12 days.

“At the moment you can see that we are working under capacity so we are on the right track,” said Pasteur’s director Laurence Baril.

While the institute had no major difficulties in terms of diagnostic testing capacity at the moment, Baril said it was important to prepare for the future and more possible community cases to test.

“What we are working on is how to set up other laboratories [for testing] in the country if needed,” she said.

When asked during the conference whether he thinks the trained doctors will meet the country’s potential needs, Bunheng expressed confidence. “I think that we can answer to our needs, and we will subsequently extend [training],” he said.

Yong Kim Eng, president of the People Center for Development and Peace, said he feared that infections would increase after Khmer New Year this week, as some people would still hold parties despite the restrictions on civilian travel that were ordered on Thursday and then eased on Friday.

Kim Eng suggested that the government should enforce additional bans on consumption or promotion of alcoholic beverages during the holiday, which Thailand already enforced during the nation’s Songkran festivities.

“The important measure the government should take is first, ban alcoholic drinks across the country, especially during New Year, and second, stop [stores] from promoting alcohol and instead promote the Covid-19 preventive measures more broadly,” he said.