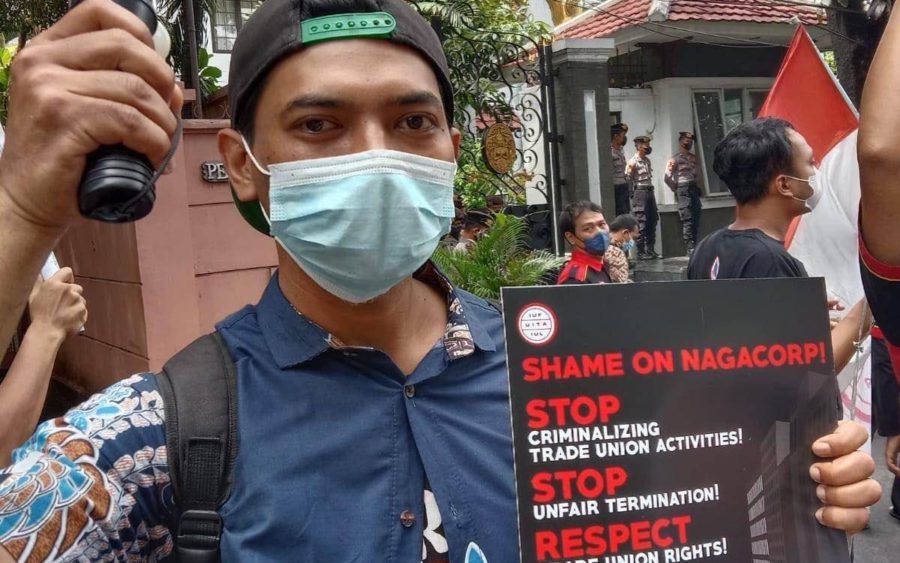 A protester in Indonesia showing support for NagaWorld workers on February 7, 2022. (Supplied)

Global unions and federations expressed their support and protested the arrest and termination of NagaWorld workers on Monday, as daily rallies came to a halt after authorities ordered all workers to isolate for seven days.

The strike was effectively stopped over the weekend after the government on Friday ordered all striking workers to get tested for Covid-19. Workers — even if they tested negative — have been asked to isolate for seven days.

Police arrested three striking workers as they were leaving the testing site at Phnom Penh’s Koh Pich island, and the court has issued warrants for four others who are yet to be taken into custody. They are accused of violating the Covid-19 Law — and could face up to five years in jail — following an investigation by antiterrorism police.

Sopheak Molika, who is one of the summoned workers, said she was surprised to see the warrants and was confused as to whether she should appear before authorities or stay in isolation as directed by the Health Ministry.

“Now I’m in quarantine. If they want me to show my face, the court should have phoned me,” she told VOD. “How could I possibly show my face at this time? They must guarantee me that I won’t be violating Covid-19 measures. I have already put my phone number [on Facebook].”

Molika did not want to reveal her location, but has posted on Facebook asking if she is allowed to leave isolation to comply with the warrant. Molika was one of five workers speaking to the media at an LRSU press conference on January 28.

Health officials tested around 250 workers on Saturday, of which four tested positive. A statement from Phnom Penh City Hall did not say how many tests were conducted on Sunday, but said 29 people had tested positive. Contract tracing was called off by Prime Minister Hun Sen in late September, though the Health Ministry over the weekend began to report an increase in Omicron cases.

Molika said around 700 workers had been tested according to the union’s communications with workers, though VOD reporters only saw about 200 workers at the Koh Pich testing facility on Sunday afternoon, with testing finishing around 6:30 p.m.

About a dozen uniformed police officers were present near the testing site at Koh Pich, but mostly sat at a table outside a dumpling restaurant and did not appear interested in making arrests.

Around another dozen men with walkie-talkies, who appeared to be plainclothes police officers, spent the afternoon outside the testing center. They were most animated while taking photos of workers who had tested positive being escorted into ambulances.

Meng Kanika, who is one of the four workers facing a warrant, broadcast a live Facebook stream from the​ Covid testing center on Koh Pich on Sunday. She said she was shocked that she was being targeted by the authorities.

“I am here for Covid testing. Why did they summon me? I didn’t incite people to block the testing. I am also one worker who is volunteering for the Covid test,” she said.

Phnom Penh police spokesperson San Sokseyha would not let a reporter ask questions about whether the four new warrants would be enforced, and only repeated the arrest of three workers on Saturday.

As the fate of the strike remains uncertain, international federations and unions expressed solidarity with the NagaWorld union, with actions planned in at least 11 countries, according to local rights group Central.

In Australia, around 15 people from three unions held banners and flags outside the Cambodian Embassy in Canberra, while around 30 Indonesian unionists protested outside the embassy in Jakarta. Social media posts also showed workers in Bangladesh and India holding banners supporting the release of LRSU workers.

Protests were also planned in the U.K., France, Switzerland and the U.S. The global activity centered around a campaign to release the jailed workers, reinstate the terminated workers and for NagaWorld to negotiate in good faith with the union over other alleged rights violations at the casino complex.

Nina Lau, a program coordinator at the Asia Monitor Resource Centre in Hong Kong, said the group had organized actions of support outside the Cambodian embassies in South Korea and Thailand, while also coordinating a photo campaign in Bangladesh.

“The use of rigid and punitive lockdown or social distancing measures is a demonstration of the expansion of state power that represses the labour movement not only in Cambodia but also all around the world,” she said in an email.

In Phnom Penh, local rights group representatives delivered an open letter to the Ministry of Interior, after which they walked to the National Assembly to submit the same document to parliamentarians.

The letter, signed by 133 individuals, groups and communities, decried what they called an abuse of power by Cambodian authorities in the arrest of LRSU members, which they said could set a “dangerous precedent.”

“The charge of incitement to commit a felony levied against the union leaders and activists sends the message to Naga World strikers that their labor rights can be flouted with impunity while they will face legal action merely for calling out their company’s labor violations and seeking redress,” the letter reads.