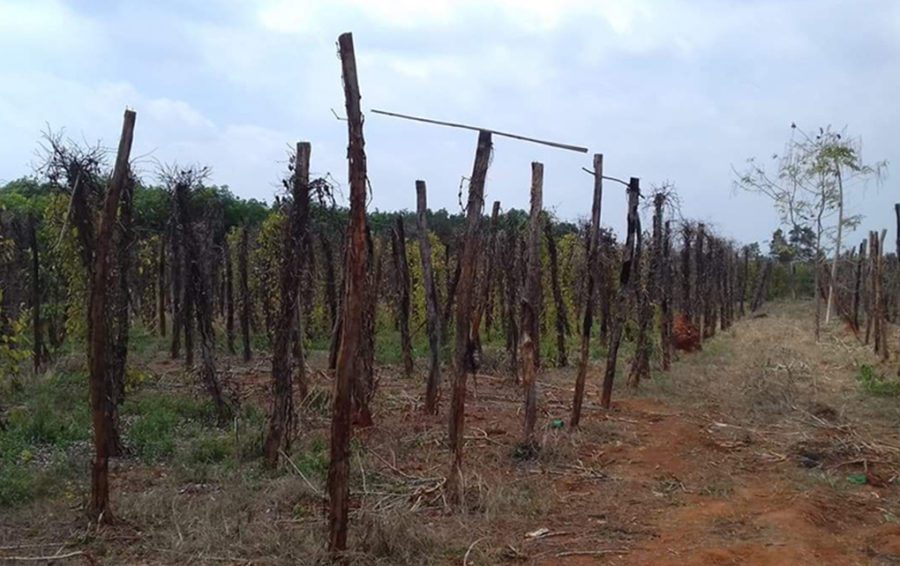 Three-quarters of the pepper plants in a farming community in Tbong Khmum province are dying from the recent extreme heat, farmers say.

Hong San, head of the Dar-Memot Pepper community, said the attrition rate of the community’s plants was far worse than in previous years and that 75 percent of the plants in Memot district’s Dar commune were on the verge of death.

The farmers needed to find ways to take better care of their plants, he said, given that a drastic drop in pepper prices was eating into the livelihoods of farmers.

“I will tell members to reduce chemical use, and when the rain comes, we will properly clean up the weeds,” San said. “And during the cooler season, when it’s done raining, we will cut and set up plastic tarps to reduce the heat.”

Pepper grows on a vine that can produce yields within a year of planting — typically 3 to 6 tons of the spicy fruit per hectare over 1,000 to 2,000 poles. But it can require as much as $30,000 of capital investment per hectare, farmers said.

Local pepper farmer San Neang said more than a hectare of his four hectares of pepper plants had already died this year. The hot weather, an outbreak of mold and improper use of chemicals likely contributed to the crop damage, he said.

Neang said he had farmed pepper for a decade and that even though a few of the plants died every season, this year had been exceptionally bad, he said.

“I would like to ask the provincial agriculture department or the Agriculture Ministry to work on the pepper crop and help organize training courses,” Neang said, calling for help securing low-interest loans for the farmers as a stopgap.

The consequences of climate change was one of the main culprits behind the pepper-plant die-offs, Piseth said. But lack of care by farmers also contributed, he added, and officials were working to try to promote better farming methods.

“It is not only pepper,” Piseth said. “We work directly with farmers for common crops to teach them techniques and how to look after crops to avoid damage.”

Coalition of Cambodian Farmer Community director Theng Savoeun said that in the mean time the government should intervene to help the pepper farmers.

“The government must cooperate with other partners or companies, hold discussions, and find solutions for people by creating financing to guarantee the agricultural production of people’s farming — not just pepper,” Savoeun said.

“The agricultural sector should be considered for financing and support, and be guaranteed from the government to the people.”

The Dar-Memot community harvests about 1,000 tons of pepper a year, while Tbong Khmum as whole is estimated to have about 2,000 hectares of pepper.