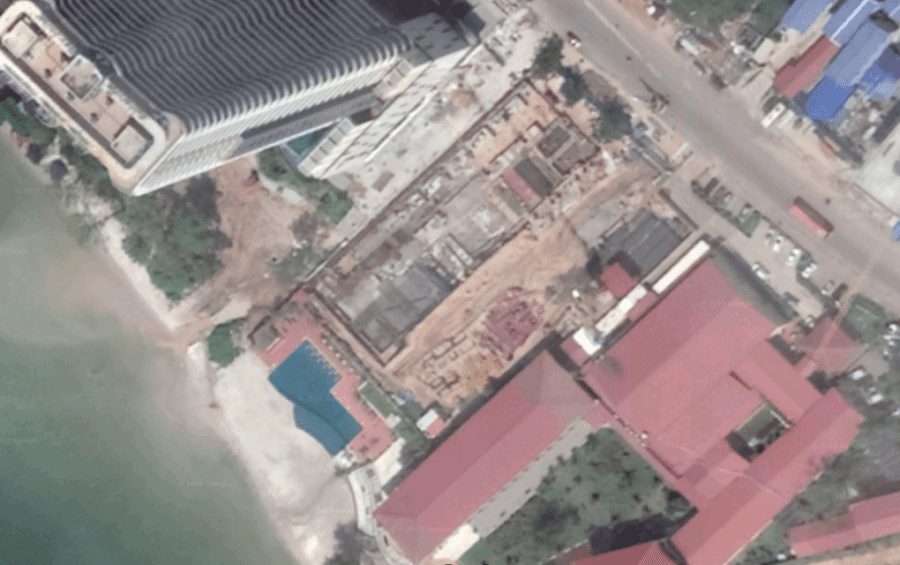 A satellite image shows the construction of the Novotel Holiday Palace on Independence Beach in Sihanoukville in 2019. (Google)

AccorHotels, the operator of Raffles, Sofitel and Novotel, has been accused of violating public beach protections at its new property in Sihanoukville, with some buildings allegedly encroaching more than 80 meters too close to the water.

Accor, however, denied that it was involved in the construction of its hotel.

The French multinational, one of the largest hotel conglomerates in the world, has touted its expansion in Cambodia over the past year, including a deal to operate a new “Novotel Holiday Palace” at Sihanoukville’s Independence Beach. Signage at the construction site advertises the upcoming Novotel operation in both English and Khmer.

The hotel — according to some reports scheduled for a 2020 completion — would abut the Holiday Palace Resort casino, owned by Indonesian tycoon Holic Tandijono, and appears to share a swimming pool right on the beach with the neighboring property.

According to various pieces of Cambodian legislation — including the 2001 Land Law, a 2016 draft Environment and National Resources Code, and a 2012 Directive on Coastal Development — the strip of land 100 meters from the high tide mark is public property, and the encroachment of state land punishable by a fine of 5 to 50 million riel (about $1,250 to $12,500) and one to five years’ imprisonment.

The 2012 directive — which sets off 20 to 30 meters as beach, a further 50 meters as public property, and 30 meters of road — allows for the construction of ports on the 50-meter strip only in uninhabited areas, and no constructions in urban locations.

In a video, environmental activists Mother Nature claimed five properties, including the Novotel, were encroaching on Independence Beach in violation of the law.

The Novotel’s swimming pool was located just 16 meters from the high tide mark — 84 meters below the legal limit — while the other properties, the Xinhaohui Palace, Sunshine Bay Hotel, Blue Bay condominiums and Holiday Palace Resort, were similarly situated just 18 to 55 meters from the waterline, Mother Nature said.

“In general, if there is no legal permission, the construction is impossible,” Phearum said. However, “if we find that it is illegal, we will take action.”

“So just wait for the action,” he said.

The taskforce was created just this week in response to the collapse of an unlicensed construction over the weekend in Sihanoukville, killing 28 and injuring 26.

When asked about the potential breach of Cambodian land laws, however, Accor’s regional director of communications and corporate social responsibility, Joyce Ong, responded that the company was not the one building the hotel, and therefore could not comment on the purported illegality of the hotel development.

She would “check with our Development, Design & Technical team for more details on the construction of this project,” she said, but later declined comment.

“As Accor is not the developer of this project so we cannot comment on its construction,” Ong said in an email, and did not reply when asked for details of the developer.

The Novotel’s neighboring casino, Holiday Palace, did not respond to emailed questions.

Cambodian National Research Organization director Sok Sokhom, who has researched coastal developments for years, said coastal areas were state public land that could not be converted into state private land to allow for private constructions.

Therefore, several major constructions in Preah Sihanouk province were in violation of the law, he said.

“They’ve built many big and small buildings along the coastal area, which are illegal buildings,” Sokhom said.

Three years ago, similar regulations were used to evict communities of beachside shacks and shops around Sihanoukville — areas that have since seen an influx of hotel and casino developments.