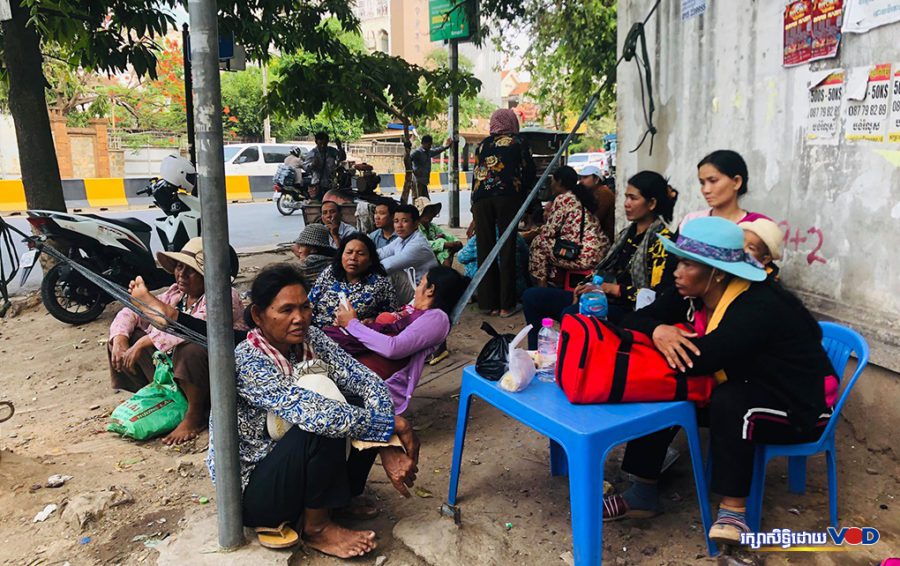 Police and military police have been accused of burning down 11 houses and razing family farms in Kratie province to clear a resettlement site for the evictees of an earlier land conflict.

About 40 representatives of Cheung Kle village in Snuol district’s Pi Thnou commune this week traveled to Phnom Penh to appeal for help. They face forced eviction to make way for a separate group of land-grab victims displaced by the Hun Mana-linked Memot Rubber Plantation.

Yen Sokhalay, one of the representatives, told VOD outside the Land Management Ministry on Wednesday that a mixed force of police and military police, led by deputy provincial governor Khan Chamnan, descended on their land on April 17, burning 11 houses and destroying several hectares of crops.

The families had lived on the land since about 2000, he said.

“We live peacefully and have grown cashew nuts, pepper, rubber and cassava on 744 hectares,” Sokhalay said, adding that local authorities had previously appeared to have acknowledged their rights to the land.

“In 2016, local authorities came to measure the land and produce certificates showing the number of families there and their possession of the land,” he said.

About 70 percent of the 154 affected families were relatives of soldiers stationed nearby, with the area adjacent to the Cambodia-Vietnamese border, he added.

Now facing the ripple effects of that incident, Bandol said families were helpless as authorities destroyed their crops and homes to clear a resettlement site.

One villager had been arrested for resisting, and military police threatened to jail anyone else who got in the way, he said.

“I would like to ask the Ministry of Land Management to intervene and stop the provincial authorities from clearing crops and burning villagers’ houses,” Bandol said. “Now we cannot stay on our farms. If we go back, the military police and deputy governor Khan Chamnan threaten to arrest us. If we dare to prevent them from clearing the crops and burning the houses, they will arrest us.”

On Wednesday — a national holiday to mark International Labor Day — no Land Ministry officials responded to the villagers’ protest and petition.

Yin Botum, deputy director of Kratie’s land management department, said he was not familiar with the case and referred questions to Chamnan, the provincial deputy governor, who was leading the relevant taskforce.

“You can’t take the land that they’re farming and hand it over to another group of villagers,” he said. “That is not a good solution. [They] should reconsider and find another solution after clearly investigating the case.”

The families currently farming the land should be allowed to stay, Senkaruna said.

“These people are all under the leadership of the same government,” he said.

In early April, the displaced Memot villagers themselves protested the offer, saying they could not accept other villagers’ land as compensation.

According to a local commune chief, the Memot plantation’s land was originally granted to Hun Sen’s daughter Hun Mana in 2008.

(Translated and edited from the original article on VOD Khmer. Updated with additional information on May 2)