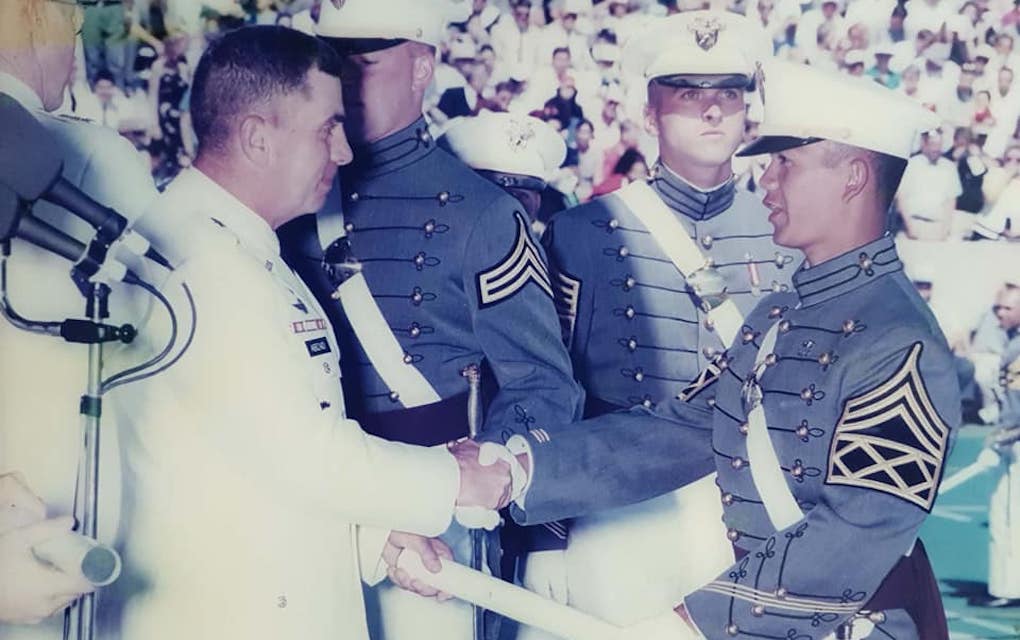 Prime Minister Hun Sen’s eldest son, who is deputy commander of the Cambodian armed forces, has proposed a wager with exiled opposition leader Sam Rainsy after Rainsy called the commander’s degree from the U.S. Military Academy at West Point a “second-class diploma.”

Lieutenant General Hun Manet said he would resign from his military posts if Rainsy, co-founder of the outlawed opposition Cambodia National Rescue Party (CNRP), offered evidence to support his claims that Manet’s degree from the prestigious military school was unequal to that of American graduates.

“I would normally never wish to bet in public in such a way, but sometimes I have no other choice but to defend my honor and dignity by responding to a baseless attack,” Manet said in a Facebook post on Monday.

“I will resign from all of my positions in the armed forces and be a civilian forever,” Manet added.

“If Rainsy dares not to take the bet or cannot show evidence to defend what he claims, he will have shown that he is a politician with old age and high education only on paper, but without responsibility and without being a role model for the younger generation,” Manet said.

Manet graduated with a bachelor of science degree from West Point in 1999, according to a photo of his diploma posted on his Facebook page.

West Point’s website says international cadets are “fully assimilated” into the Corps of Cadets and their four-year education is “identical to that of U.S. cadets.” The application process for international students requires that they be sponsored by a “national-level government official,” unlike U.S. citizen applicants.

While some foreign students have paid their tuition at West Point, Manet’s education was paid for by the U.S. government, the New York Times reported in 1999.

In his graduating class of 934 cadets, Manet was one of seven international students, according to the Times.

A West Point spokeswoman said at the time that the academy had spaces for up to 40 foreign students, 10 in each class. The U.S. State Department and the U.S. Department of Defense decided which countries were eligible for the spots each year, the Times reported.

In his own Facebook post on Monday, Hun Sen, who attended Manet’s graduation ceremony in New York state, told his followers to listen to his son’s statement about the “distortion made by the traitor,” a term he often uses to refer to his political rival, Rainsy.

“It is my son’s turn to crack down on this traitor because he is the one who came out and attacked my son first,” Hun Sen said.

Rainsy, who has lived abroad since 2015 to avoid a number of court convictions that he says are politically motivated, vowed in August to return to Cambodia on November 9 with other exiled senior CNRP leaders.

He has said he intends to restore the banned party and called on Cambodians to rise up against the government of Hun Sen, who has led the country for 34 years. But Rainsy has denied allegations by officials that he is planning a coup.

About 30 CNRP supporters have been arrested this year in relation to expressing their support for Rainsy’s return and the party, which was dissolved by the Supreme Court at the government’s request in 2017.

Rainsy said in a Facebook post on Monday that Hun Sen and his family offered “bad examples” by “boasting their fake degrees or second-class diplomas,” which he claimed required lower academic standards and were reserved for foreign students with “political connections.”

“Providing evidence of your real knowledge and expertise is more relevant, more responsible and more convincing than proposing to take an oath or engaging in a wager,” Rainsy said.

Hun Sen and Rainsy regularly trade barbs and bait each other with bets in Facebook posts, speeches and media interviews, although it’s unclear if either has ever paid up after losing a wager.

In late August, Hun Sen proposed a bet with Rainsy that the prime minister would step down if Rainsy was able to return to the country in November and not be arrested within 24 hours, the Phnom Penh Post reported.

The week prior Rainsy had called on Hun Sen to resign if Rainsy returned on November 9 as promised.

Last year, Hun Sen accepted a proposed bet from Rainsy to step down if detained opposition president Kem Sokha was not released from de facto house arrest before March 3 this year.

“I am asking him to step down, but if I lose, I will walk into jail and be detained with Kem Sokha,” Rainsy said, as quoted by the Post.

Sokha remains under court supervision and is restricted to a few block radius around his house in Phnom Penh.

Sokha’s lawyers said in a statement at the time that whether their client was released or the widely criticized treason charges against him were dropped was a matter for the courts to decide and shouldn’t be the subject of a bet.

“The co-lawyers understand that using his Excellency Kem Sokha’s [situation for political gain] with [this] bet is making our nation suffer,” the statement said, according to the Post.

“We call on Cambodian politicians to remain moral as a good example for the next generations,” it added.