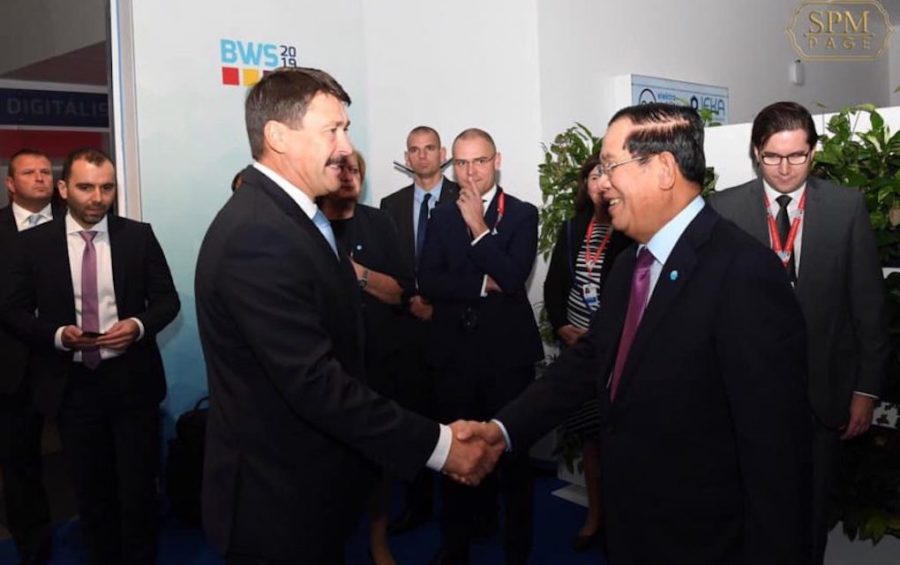 On the second stop of his European tour, Prime Minister Hun Sen again asked his hosts for support in retaining trade preferences as the E.U. reviews its “Everything But Arms” deal with Cambodia over alleged violations of political and human rights.

Speaking to Hungarian President Janos Ader on Tuesday, Hun Sen sought the leader’s continued support over the issue, according to a post on Hun Sen’s Facebook page.

“What Cambodia wants is to have the European Union carry out the process fairly for Cambodia,” Hun Sen said.

The post stated that Ader had supported Hun Sen’s request.

Hungarian officials did not respond to a request for confirmation by the time of publishing.

In June, Hun Sen also met Hungarian Prime Minister Viktor Orban in Hungary. The Cambodian government’s Press and Quick Reaction Unit claimed at the time that Orban had pledged “to take Cambodia’s side” in the EBA review.

Hun Sen’s five-day tour began in the Czech Republic and will end in Bulgaria this week.

Political analyst Em Sovannara said Hun Sen appeared to be campaigning for support among the three central and eastern European countries, but doubted it would affect the E.U.’s decision-making.

“Cambodia needs to have mechanisms that uphold democracy and human rights in accordance with the demands of the European Union, or Cambodia will lose the EBA,” Sovannara said.

The E.U. embarked on its EBA review in February after the Supreme Court dissolved the main opposition CNRP eight months ahead of a national election last year.

The E.U. is Cambodia’s largest export market, accounting for 39 percent of the country’s exports.

A final decision on the EBA review is due in February.