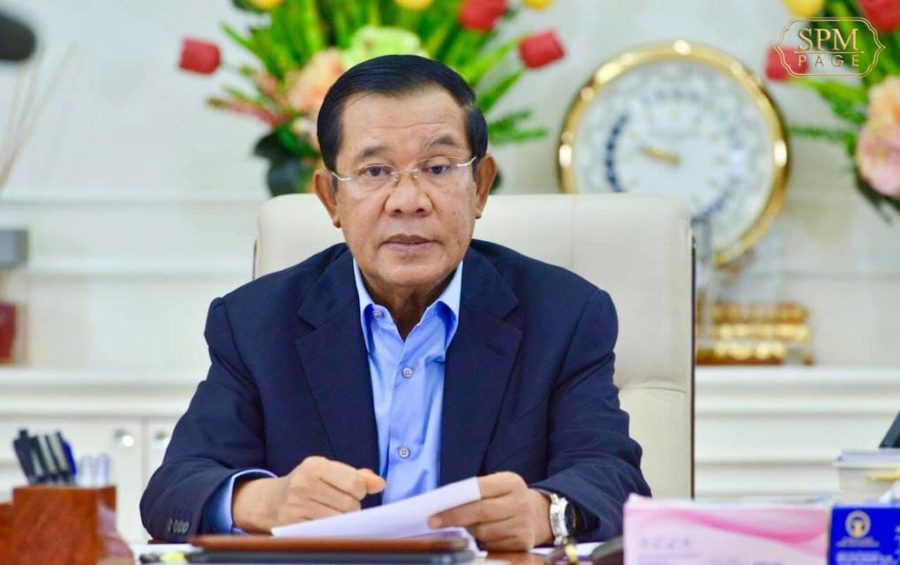 Prime Minister Hun Sen delivers a speech from his home in Kandal province on December 15, 2020, in this photograph posted to his Facebook page.

All grade 12 students will pass without taking their year-end exams due to disruptions from Covid-19, Prime Minister Hun Sen said in a surprise announcement on Tuesday that had the Education Ministry and others in the sector unable to immediately answer questions about university admissions and scholarships.

Sin Uddom, graduating high schooler from Svay Rieng province, said he was happy with the prime minister’s decision to cancel exams. But some students who worked hard might feel disappointed, he said.

“I don’t think we’ll be valued as much because everyone passes,” Uddom said.

During a live-streamed speech from his house in Kandal province, Hun Sen said the exams — already delayed due to Covid-19 — would be canceled.

“I will not allow the exam to be held,” he said.

The Education Ministry had presented him with a few options, including to hold the exams in mid-January at high schools instead of testing centers to prevent crowding, or use students’ grades from during the year to determine who passed.

But Hun Sen said he preferred to simply let all students pass, acknowledging the difficulty of learning during the pandemic.

“It is an encouragement to join together to fight against Covid-19 through the students and youths,” he said.

Education Ministry spokesperson Ros Soveacha would only say that the ministry will discuss the prime minister’s recommendation internally and will soon inform the public.

Chea Sopheap, rector of Asia Euro University, said he had not heard Hun Sen’s announcement, and did not know how it would affect scholarships, which are usually based on grades from the exams.

Sopheap said he would wait for the ministry’s instructions and hold discussions afterward. He added that he welcomed Hun Sen’s decision.

He said it had been a tough year for high school students, but he expected they had made do with online learning. The lack of grades would likely be less of an issue for incoming students for his university’s most popular majors like law and administration, he added.

“The quality does not decrease much. It is acceptable,” Sopheap said.

“It is about their ability, and those who pass take pride in it, because passing an exam with grade A during the time of Covid — that would be a matter of pride for themselves as well as their families,” she said.

Schools could have the exams at their own campuses and teachers could assess whether their students should pass, Chhayavy said.