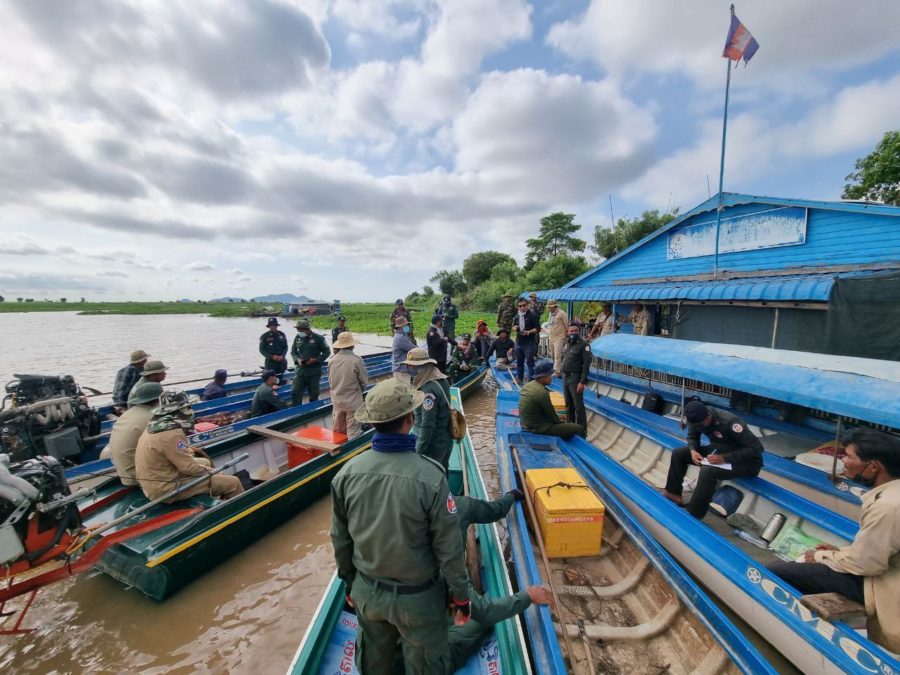 Security personnel are briefed before they begin a campaign to crackdown on illegal fishing on March 25, 2022. (Kampong Chhnang Provincial Administration)

Authorities responsible for the Tonle Sap lake again held an “emergency meeting” then fanned out across the country’s largest lake after Prime Minister Hun Sen said they had failed to curb illegal fishing.

Late last year, Hun Sen also rebuked officials around the Tonle Sap, at that time for failing to protect flooded forests and for even being involved in encroaching on them. This led to an urgent display of action as officials took boats around the lake’s shores to destroy land-marker poles and cottages.

This week, Hun Sen turned his attention to illegal fishing on the lake.

“Because you do not want to do it — this is the issue,” Hun Sen said at the Agriculture Ministry’s annual meeting on Wednesday. “Our governor said they could not catch them because they are too fast! How fast? If we put all helicopters nearby and fired from above at once, where would they go?”

“We have not been able to crack down on them — so there is no need for us to be provincial governor, no need to be minister of agriculture, water and meteorology, environment,” he said. “If you cannot defeat them, no need to be commander and police chief.”

Agriculture Minister Veng Sakhon wrote on his Facebook page that his ministry had convened an emergency meeting on Thursday with National Police commissioner Neth Savoeun, military commander Vong Pisen, military police chief Sao Sokha and others. The closed-door meeting was to gather input for cracking down on illegal fishing on the Tonle Sap, Sakhon said.

The operation found illegal nets and other offenses, Hun said. He also defended the province’s past actions.

“The forces will continue to take action on related crimes in the territory of Kampong Chhnang. In the past, provincial fisheries officials have cracked down frequently and also taken some people to court,” he said.

Kampong Thom agriculture department director Pen Vanrith also said his officials were always active. “This work does not wait until there is an order from samdech to do it. We do it every day.”

Heng Kimhong, an official at the Cambodian Youth Network, said large-scale crimes could be the result of negligence and corruption.

“The government needs to thoroughly investigate, especially the effectiveness of law enforcement. There should be an in-depth investigation into whether the source of all the crimes is linked to the authorities. When the authorities are involved, there must be accountability,” Kimhong said.