Hun Sen Dares Critics, Within and Without, to Challenge Him﻿ 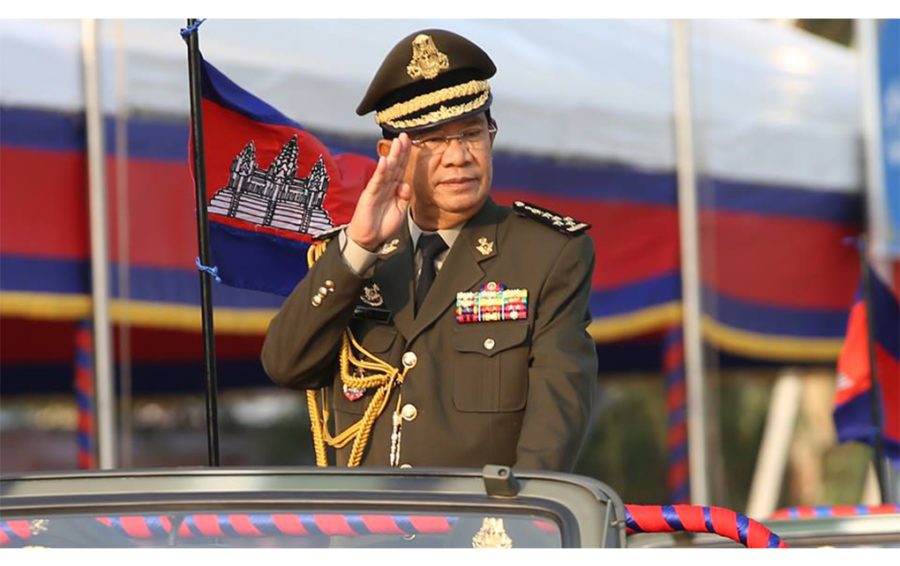 In his gravest moments of weakness, Prime Minister Hun Sen has never shied from daring his challengers to a fight.

From asking rival military forces to return in 1991 to ensuring ruling party rival Chea Sim visited Bangkok in 2004 for “medical care,” Hun Sen has made an art out of cloaking creeping fragility within a haze of dramatic displays of defiant cockiness.

The strategy has repeatedly paid dividends, with the prime minister most notably turning the July 1997 “coup d’etat” into the July 1998 “Miracle on the Mekong” election — as well as mounting protests against his rule in 2013 by the Cambodia National Rescue Party (CNRP) into 2014’s “culture of dialogue.”

It is an aggression that gets results. Feeling his weight forced onto his back foot, Hun Sen’s response has been the same: If you want to fight me, let’s fight.

So too again now that the European Union and U.S. threaten to revoke Cambodia’s tariff-free access to their large markets — which buy two-thirds of the country’s exports through the “Everything But Arms” (EBA) and Generalized Systems of Privileges (GSP) schemes — if he does not reverse a descent into despotism.

As head of a regime that has long buttressed its legitimacy in economic development, a less experienced leader might be compelled to offer a brief display of contrition and flexibility when faced with the serious threat of economic damage.

For one, the recent fact-finding trip of the U.N.’s Special Rapporteur for Human Rights, Rhona Smith, to Cambodia for almost two weeks this month may have been seized as an opportunity to display a move back toward democracy.

Not so for Hun Sen, now in his 35th year of power.

On the contrary, in a move seemingly scheduled to coincide with the arrival of a U.N. official, whose opinions will undoubtedly influence decisions made by the E.U. and U.S. over the rest of the year, Hun Sen’s government dug in its heels.

Hence while Smith was winding up her trip to Phnom Penh on May 8 and 9, on the other side of Cambodia the Battambang Provincial Court was busily compelling more than 20 former Cambodia National Rescue Party (CNRP) figures to court on claims they were illegally cavorting over cold noodles.

“It’s a tactic Hun Sen uses each time he feels insecure of a force against him. The visit of the Special Rapporteur is a time to flex muscles,” said Mu Sochua, who was a CNRP lawmaker in Battambang and head of the provincial working group.

“It is an action taken by a dictator who has no interest in protecting human rights, freedoms, liberties,” she added, and in spite of the fact it will be “in the UN reports and considered by the EU when considering the final steps for EBA privileges.”

The audacity to call minor opposition figures to court in the closing days of her trip did not seem lost on the U.N. Special Rapporteur. During her exit, Smith made a point of calling for an opening of the space for former CNRP figures — even if the November 2017 CNRP dissolution and ban on 118 top officials is not reversed.

“I believe it’s indicative of the lack of political space in Cambodia and I have concerns in that regard,” Smith told RFA. “It is my hope that there will be a new opening for political culture in Cambodia based on dialogue and mutual respect.”

If Hun Sen appears to show little interest in opening up the political space three months into a six-month E.U. review of Cambodia’s eligibility for trade privileges — and even during a two-week fact-finding trip by a U.N. rights official — it is difficult to imagine what the correct circumstances for such a change might be.

“By hauling these CNRP activists into Battambang court while Rhona Smith was still in the country, the Cambodian government showed maximum disrespect towards her and the human rights mandate she is carrying out,” said Phil Robertson, the deputy Asia director for Human Rights Watch.

“It’s gotten now to the point where UN High Commissioner for Human Rights Michelle Bachelet needs to now speak up, defend the work of her agency and its office in Phnom Penh, and demand Hun Sen end his litany of rights abuses.”

Any doubts that a message was being sent by the government about its intentions to comply with foreign pressure were indeed quashed soon after Smith’s exit.

The provincial police of Kampot, Kompong Thom and Banteay Meanchey followed up Smith’s exit from Cambodia — and her calls for “mutual respect” — by calling in another 38 former activists from the banned opposition for questioning.

Even if the government ultimately offers concessions closer to the business-end of the E.U.’s review into Cambodia’s access to its EBA tariff-free exports scheme, Hun Sen for now seems keen to encourage the view it will be on his terms only. The summonses for the opposition activists during and in the wake of Smith’s trip, then, represented an opportunity for Hun Sen to send out a message.

“It’s bizarre,” said Sophal Ear, the author of Aid Dependence in Cambodia and an associate professor of diplomacy at Occidental College in Los Angeles. “Since those questioned were not among the 118 banned [from political activities], it seems to me the intent here is to further strangle democracy in Cambodia.”

“They could have used the opportunity to pull back, once again, from the brink. Instead, they continued to ignore all red lights and the impending suspension of EBA and probable suspension of GSP, further delegitimizing their rule.”

However, it is not only those mounting pressure from outside Cambodia to whom Hun Sen now stares down, daring a challenge even as he teeters on instability.

Within his own party, Hun Sen now looks out at a sea of faces inherently less invested than he himself in his grand plan to convert his decades of rule over the country into a dynasty through a transition to his son, Hun Manet, now age 41.

He exuded great comfort while demoting Cambodia’s top generals by an entire rank in order to strongly stamp upon them the authority of Manet — who five years ago held minor rank but became deputy military commander last year.

Daring the entire military to challenge him in his last big gambit as Cambodia’s leader, the premier laid down the gauntlet to anyone questioning his ability to pass power onto his son within a party that has long been much larger than himself.

The message, once again, was clear: If you want to fight me, let’s fight.

The silence from the military has spoken for itself, at least for now.

Still the premier’s hubristic style in the face of challenge only masks the unenviable position that has necessitated it. The two most lucrative markets for Cambodia’s limited exports remain under threat unless he quickly changes tack — or if E.U. and U.S. officials back down from their threats in the face of his daring recalcitrance.

Others in his party, on the other hand, may only be biding their time and waiting to see if he does anything to undermine his patient plans for a succession.

There is also a tension in his willingness to risk economic ruin amid diminishing exports at the same time he seeks to place his son at the head of a party long promoted as the home for the country’s businesspeople and those who do not “rock the boat.”

The situation is nothing much new, though. Hun Sen, after all, has prospered for nearly 35 years by showing unusual flexibility while in secure positions of strength — but a dismissive intransigence while in his gravest moments of weakness.