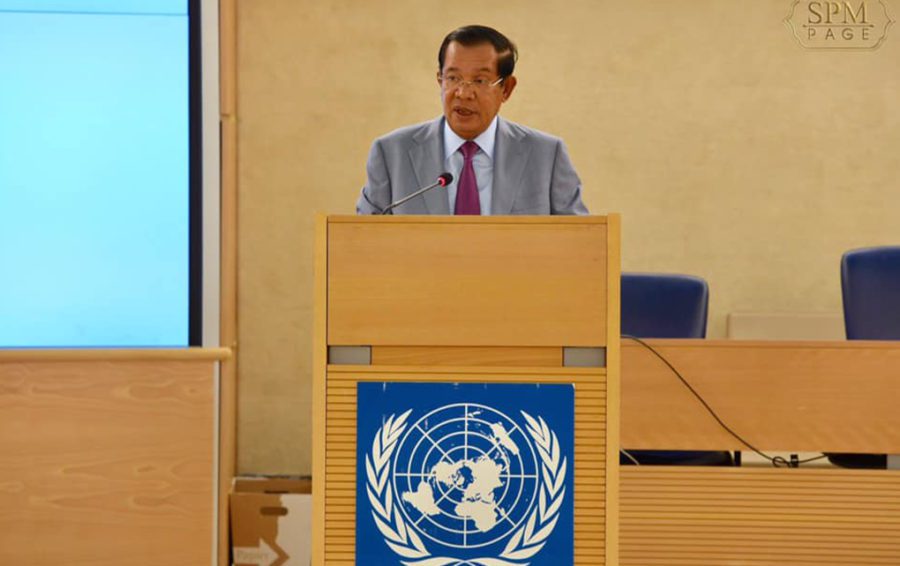 Calling last year’s effectively opposition-less national election an improvement in democracy, Prime Minister Hun Sen told the U.N. Human Rights Council in Geneva on Thursday that his government reflected the will of his people.

“Every day, I always receive many comments from my people,” Hun Sen said in his speech. “The government has never had any intention to curtail people’s rights but only to encourage and identify with people’s comments as if they were a mirror.”

Speaking at the 41st session of the Human Rights Council, Hun Sen said he regretted how his government had been accused of clamping down on democracy, human rights and free expression, when it had only tried to improve democracy as evidenced by last year’s “smooth” election.

The CPP won all 125 seats in the National Assembly, and there were more blank and invalid ballots than votes for any other party.

The U.N.’s special rapporteur on human rights in Cambodia, Rhona Smith, has said that voters were pressured to turn out on election day, while reports from the country’s provinces have detailed commune- and village-level leaders harassing residents to support the ruling party.

Around the time the CNRP was dissolved by Supreme Court order, dozens of radio stations were taken off the air, independent newsrooms shut down, and civil society groups threatened with legal action as alleged supporters of a color revolution.

As a result, the E.U. and U.S. are reconsidering trade preferences that have been granted to Cambodia, saying the decline in democracy and human rights violates their terms.

In 2013, the CNRP pushed the CPP to near-defeat amid widespread reports of irregularities on the voter rolls. The opposition party also recorded huge gains in the 2017 local-level commune elections.