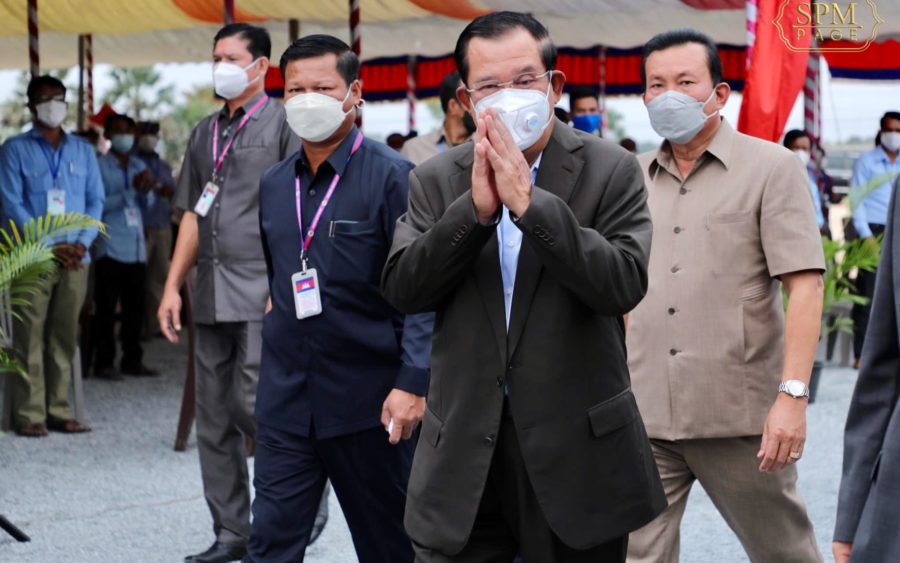 Prime Minister Hun Sen at a road inauguration ceremony on March 2, 2022, where he chimed in on the Russia and Ukraine conflict. (Hun Sen’s Facebook page)

In speeches, Facebook posts and Fresh News articles, several government officials have turned on Europe and the West over their support for Ukraine.

“The war between Russia and Ukraine is no longer a Russia-Ukraine war, but a Russia-Europe war,” Prime Minister Hun Sen said in a speech on Wednesday inaugurating road construction.

Europe’s provision of arms to Ukraine was escalating the conflict, and was making it more difficult to end, Hun Sen said, also noting the heightened risk of nuclear conflict.

“We oppose the use of force,” Hun Sen said, while also acknowledging Russia’s attack on Ukraine. But “war cannot end war,” he said.

Since Russia’s February 24 invasion of Ukraine, a string of Cambodian officials have commented on what they see as Western hypocrisy. Over the weekend, Justice Ministry spokesman Chin Malin said Russia had learned from the U.S. and allies to label wars as operations to protect freedom, democracy and self-determination, and to act first and negotiate later.

Rural Development Ministry secretary of state Chrun Theravat wrote in an opinion piece on Fresh News that Russia’s attack on Ukraine was “not an invasion.”

“As soon as the Russia-Ukraine war broke out, the countries that used to discipline Cambodians over respecting freedom of expression and freedom of the press hurriedly shut down all newspapers that were considered pro-Russian,” Kanharith said this week on Facebook. “Praise them, their skin is really tough!”

Government spokesman Phay Siphan denied on Wednesday that officials’ opinions on the conflict were all one-sided, and said only Hun Sen and the Foreign Affairs Ministry spoke for the state.

Some officials saw the E.U. and U.S. as using Ukraine as a geopolitical excuse to oppose Russia, while others backed independence for Ukraine, Siphan said.

For political scientist Seng Sary, however, Cambodian officials appeared to be using the Ukraine conflict as an opportunity to air their distaste for the West, leading them to blame the victims in the war.

“Their remarks are not right and are biased with hate for the E.U. and U.S.,” Sary said. “The bias is based on hate for the free world that often punishes the Cambodian government to force it to return to a democratic and human rights-respecting path.”