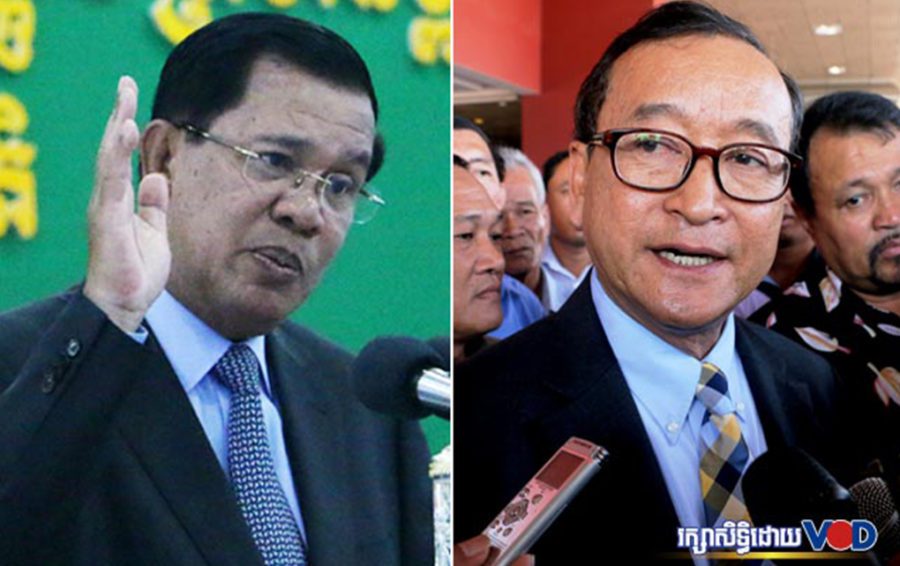 Anyone who has “unintentionally” become involved in exiled opposition leader Sam Rainsy’s planned homecoming next month can confess and be spared punishment, Prime Minister Hun Sen said on Wednesday.

During a speech to graduating students at Phnom Penh’s Koh Pich, Hun Sen said he could not wait for November 9 to get his chance to suppress the attempted return of the senior leaders of the dissolved opposition CNRP.

“Those who participate will be punished,” he said. “And if you have already unintentionally participated, you can confess and will be exempt from punishment.”

The judiciary had a “new charge” that would be used against any supporters of the homecoming, he said.

Plotting an attack, part of Cambodia’s long-standing Criminal Code, has recently been used against several CNRP activists, many of whom are in hiding, in relation to expressed support for Rainsy’s return.

Rainsy has also attempted to galvanize popular support for the promised return with a “nine fingers” campaign, in reference to the proposed date, encouraging people to post photos of themselves holding up nine fingers.

Hun Sen, however, offered the graduating students an alternative interpretation.

“If you want to do a nine-finger campaign, you should cut one finger off,” he said. “That will show your bravery.”

He added that Phnom Penh’s annual Water Festival, this year scheduled for November 10 to 12, will be held no matter the circumstances as a display of Rainsy’s irrelevance.

“Even if the water [depth] is as low as 1 meter in Phnom Penh, we will still have boat racing in order to beat it on his head,” he said.

Mu Sochua, who was a vice president of the CNRP when it was dissolved, said on Thursday that Hun Sen’s words would not deter the planned return of opposition leaders.

“I would like to take this opportunity to express my admiration to the CNRP’s grassroots leaders as well as people who dare to speak the truth and don’t back down,” Sochua said, advising them that they “don’t need to confess.”

“We have to defend democracy. Cambodian people need a positive change and our return is for nonviolent change,” she said.

Political analyst Meas Nee said Hun Sen’s threats suggested the ruling CPP was seriously considering the possibility that Rainsy would actually follow through on his promise.

He said the politicians were playing a dangerous game, as witnessed by the increasing numbers of arrests.

“When the suppression becomes even stronger, we cannot predict how much people can tolerate it,” Nee said. “We don’t know yet. But for me as an analyst, this sort of political turn is a difficult path for Cambodia in the upcoming days.”

The Supreme Court dissolved the CNRP in November 2017, two months after party president Kem Sokha was arrested for allegedly colluding with the U.S. to overthrow the government. In June that year, the CNRP received more than 3 million votes in local elections, or about 44 percent of the total ballots cast.