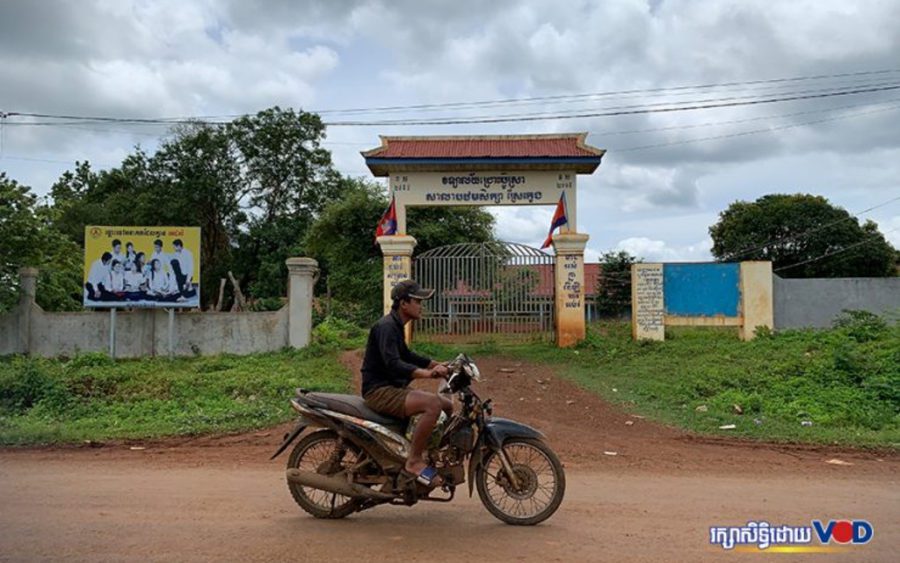 Prime Minister Hun Sen pushed for rural schools in areas with little Covid-19 to be reopened even ahead of ending nationwide school closures, a move one teacher said was sorely needed.

In a speech posted online on Tuesday morning, Hun Sen said the education minister should discuss with provincial governors to find areas where it would be safe to reopen schools.

“Having seen that there are rural schools that have had no infections, we have the capability to open those schools without waiting for the nationwide reopening of schools, or [even] the whole province or district,” Hun Sen said. “We should select the villages or communes that have no infections, and our children can go to study while maintaining social distancing and following the Health Ministry’s measures.”

The bulk of Covid-19 transmission had been in urban areas, Hun Sen said, adding that rural students were also at a greater disadvantage when it came to online classes.

“Even though we set up distance learning, or so-called online learning, our rural and our poor children don’t have the means and have no internet,” Hun Sen said. “We are in a difficult state — if we continue to be closed without looking into and identifying infected areas and not infected areas, this could lead to students dropping out of their school or students forgetting their alphabet.”

Both rural primary and secondary schools could be reopened following discussions, he said. Distance learning would continue elsewhere, while some schools could be allowed to have a combination of online classes and in-person classes. “If not, we will be in a state of losing opportunities for our children, teenagers and youth,” he said.

For nationwide school reopenings, Hun Sen said vaccinations were key. According to the Health Ministry, vaccinations of the country’s 2 million adolescents aged 12 to 17 are already 77 percent complete for first doses after only starting this month following an announcement in July.

Hun Sen added that Covid-19 numbers were headed in the right direction in Phnom Penh, especially the number of people getting seriously sick or dying.

The provincial education departments would begin discussing which schools could reopen with the board of governors  for the provinces and Phnom Penh, the Education Ministry said in a statement released later on Tuesday, noting that schools would create management committees involving local officials and parents to plan schools’ reopening and keep each other informed.

However, schools would reopen with some restrictions, limiting classes to 15 students with a split schedule for in-person classes. Priority would be given to classes for ninth and 12th grades — the years when students take national exams — but other grades could meet in study groups of up to 15 people at schools, homes or pagodas.

The statement added that teachers should be updating their curricula regularly, and refining it to focus clearly and concisely on the most important lessons. Teachers should also make use of the Education Ministry’s instructional videos and online worksheets, available on Telegram, the ministry websites and a mobile app, the statement continued.

Sar Sophal, a 9th grade teacher in rural Svay Rieng, said his school had recently been instructed to look into capping classes at 15 students per room.

“We have missed learning for a long time and learning at school is convenient for students, especially in the rural area like mine,” Sophal said. “Online learning has not been complete because the students in rural areas find it difficult to access phone services and their parents do not have enough time to look after them.”

“Sometimes students can’t see the lesson since they have poor internet service,” he said.

Sophal added that about 30 percent of his students had dropped out, and only 38 of 61 eligible students at the school had applied to take the grade 9 national exam.

Provincial administrations on Tuesday said they were looking into the proposal.

Men Kong, spokesperson for the Stung Treng provincial administration, said the local education department was looking to first reopen the 9th and 12th grades, whose students have national examinations.

“But for this phase, we are discussing whether downtown, city and district [schools] will open at the same time — this is the key thing that is being discussed to make a decision,” Kong said, adding that schools would be required to follow health guidelines including wearing masks.

Kratie deputy governor Pen Lynath said officials would look into which areas could be reopened.

“We cannot estimate it yet since it occurs in every district,” Lynath said. “We need to evaluate the real situation first.”

Chhuo Bunroeun, Banteay Meanchey’s provincial education department director, said there would be a meeting tomorrow to look further into the proposal.

“We do not know how to open it yet since today I’ve just received instructions from the minister,” Bunroeun said. “The decision is both the provincial administration and the ministry’s. … We will have a meeting and request further instructions.”

Children’s NGOs, including Unicef, Plan International, ChildFund and Save the Children, have been calling for the reopening of schools, saying children are missing out on their childhoods due to isolation and other concerns, while noting that children were less at risk of Covid-19. Students, teachers and families in rural, remote provinces like Mondulkiri say that students struggled to access and follow online classes throughout the pandemic.

Updated with additional information from the Education Ministry and comments from a schoolteacher and provincial officials.