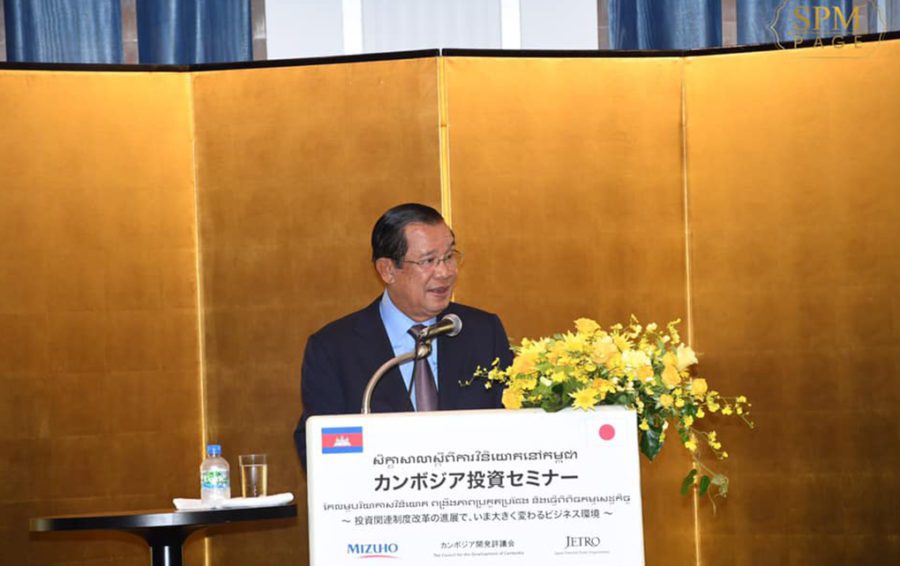 Prime Minister Hun Sen told a press conference in Tokyo that he was expecting “a dog” living outside Cambodia to wage war against him in an attempt to overthrow his government.

With the obvious reference to former opposition leader Sam Rainsy — living in exile in Paris and making frequent social media posts calling for coups and uprisings — Hun Sen on Thursday continued the pair’s ongoing bouts of mudslinging, this time at the International Conference on the Future of Asia.

“I am waiting for the war that will happen by the announcement of a traitor … a dog shouting from overseas asking people to arrest Hun Sen,” Hun Sen told the gathered Japanese media.

All actions against Rainsy and his Cambodia National Rescue Party (CNRP), which was dissolved in 2017 ahead of a national election, were simply a matter of enforcing the law and maintaining peace and order, he said.

“I will not do anything else aside from legal proceedings,” he told the press conference.

CNRP deputy Mu Sochua said Hun Sen’s recurring references to war were done to push rivals off the political stage. But the CNRP’s leaders living abroad would not be deterred, she said.

“We will return to our home country,” Sochua said.

“Politicians are confronting one another more aggressively,” Sovannara said.

“After a declaration like this by the ruler,” he said, referring to Hun Sen’s speech in Japan, “I think local authorities will take stricter action against activists.”

Dozens of former CNRP members have been called in for court and police questioning across the country over the past month, accused of violating the Supreme Court order that dissolved the party by gathering for lunches and posting photos to social media.

Hun Sen’s Cambodian People’s Party (CPP) promotes a story of leading the country out of the Khmer Rouge era into a period of peace and prosperity. During election cycles, party leaders warn voters that its electoral loss would plunge the country back into war, justifying the repression of political rivals. The CPP refused to hand over power after losing U.N.-administered elections in 1993, and ousted Hun Sen’s then-rival Norodom Ranariddh from co-prime ministership through armed clashes in 1997.