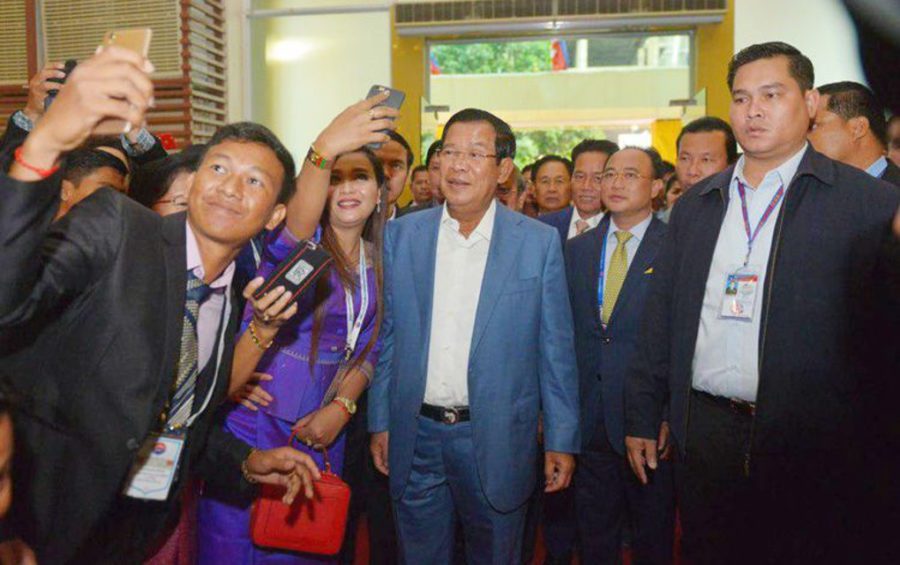 News media should dare to speak the truth — especially against the “fake news” spread by “the outlawed rebel group and opportunists with foreigners behind them,” Prime Minister Hun Sen said in a letter to the Cambodian Editor Forum on Thursday.

The annual forum was organized by the Club of Cambodian Journalists, which is run by the editor-in-chief of a television station owned by a ruling party senator.

In his letter, Hun Sen said he considered news outlets to be participants in the government’s fight against corruption and attempts to reform the law, judicial system and public administration.

“The government really needs media institutions with energy and responsibility, with honesty and professionalism,” he wrote. “Our reporters must listen to the voices of all related parties, dare to speak the truth, dare to criticize in a constructive way.”

This was especially true when it came to combating the slander spread by opposition groups, he said. Though he did not give names, Hun Sen used references he routinely employs to criticize the main opposition CNRP, which was dissolved in 2017.

“I would like to acknowledge my admiration for a large number of reporters and media institutions that try hard to give explanations to respond to the fake news spread by the outlawed rebel group and opportunists with foreigners behind them … aiming to pollute society against the Cambodian government,” Hun Sen said.

Good media outlets should endeavor to “inform national and international audiences to know the real situation in Cambodia and prevent in time all their crafty tricks that attempt to overthrow the legitimate government and drag the country to fall into the fire of war again,” he said.

The CNRP was the ruling CPP’s only viable challenger in recent elections. Without it contesting the vote last year, the CPP swept all 125 seats in the National Assembly. The CNRP’s dissolution has been criticized by several foreign governments.

Lim Chea Vutha, CEO of Fresh News — known particularly for its access to the government — said he welcomed the prime minister’s statement, but said it was not always easy to produce balanced stories due to perceived bias among sources.

“I acknowledge that sometimes, interviews are made with only one side. Especially when it comes to the opposition group, we find them difficult to contact,” Chea Vutha said. “Sometimes, we contact them, but when they hear from us they hang up their phones.”

May Titthara, executive director of Cambodian Journalists Alliance, or CamboJA, a newly formed association with a mission to support independent journalism, said he supported what Hun Sen was saying, and that it implied support for independent media outlets that report freely and fearlessly.

“In response to what Samdech says he really wants, Samdech should consider providing licenses to some radio stations whose licenses were removed and allow some foreign outlets to buy airtime like in the past,” Titthara said, using an honorific for Hun Sen. VOD editors are among CamboJA board members.

Dozens of radio stations were shuttered in 2017 amid what international press groups have labeled a crackdown on media freedom, knocking the U.S.’s Radio Free Asia (RFA) and Voice of America (VOA) as well as VOD off the air.

That year, two journalists for The Cambodia Daily, Aun Pheap and Zsombor Peter, faced court prosecution for incitement after reporting on local elections. Their trial has been scheduled for December 25, though they currently both live abroad.

Two RFA journalists, Yeang Sothearin and Uon Chhin, were arrested for espionage also in 2017. They remain on bail, with the verdict for their case has been repeatedly delayed.

Reporters Without Borders has reported a steady slide in Cambodia’s press freedom in recent years, from 132nd worldwide in 2017 to 143rd this year, out of 180 ranked nations.