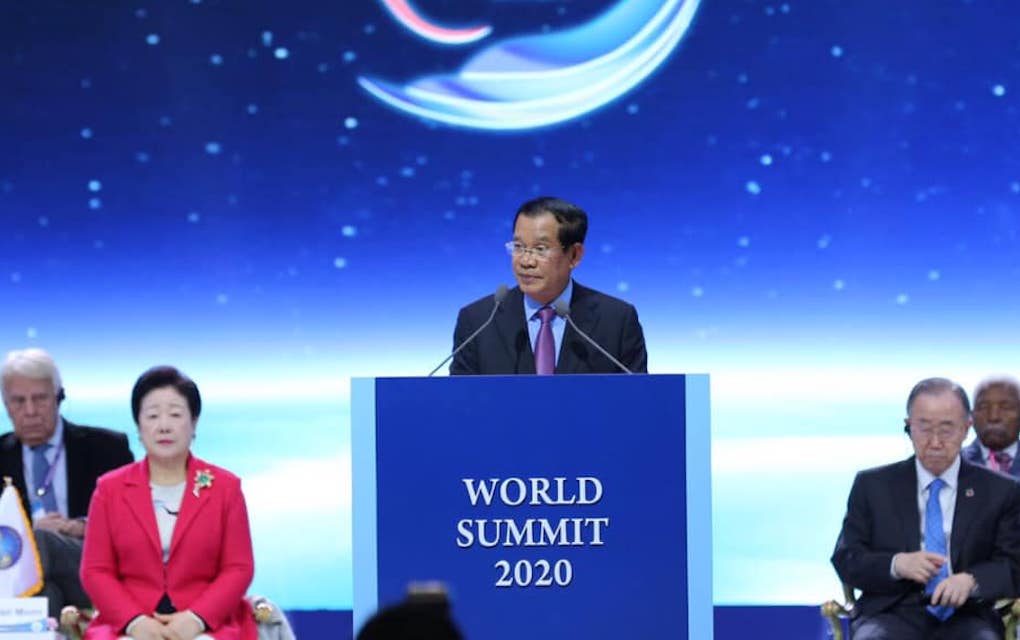 Prime Minister Hun Sen delivers a speech in Seoul on February 4, 2020, in this photograph posted to Hun Sen’s Facebook page.

UPDATED 9:25 a.m. — Prime Minister Hun Sen has opted to travel to Beijing on Wednesday, instead of China’s Wuhan, where a new strain of a respiratory virus that has spread to more than 20 nations was first detected, he said in a Facebook post on Wednesday morning.

Hun Sen had said on Tuesday that he planned to visit locked-down Cambodian citizens in Wuhan, however, it was unclear at the time whether or how he’d be able to travel from Seoul, where he was attending a summit this week, to the quarantined Chinese city.

Foreign Affairs Ministry spokesman Koy Kuong said in a message late Tuesday that the premier would not travel to Wuhan, as Chinese authorities were busy working to contain the viral outbreak and couldn’t prepare for Hun Sen’s visit.

The prime minister said he would leave South Korea for Beijing on Wednesday afternoon to meet Chinese officials and learn how the Chinese government was caring for Cambodian nationals, including students, in Wuhan and other cities in China.

“Because our Chinese friends understand my concerns about Cambodian citizens and students living in China, this morning the Chinese government said it would let me travel to Beijing,” Hun Sen said in the post.

The prime minister first announced his intention to visit Cambodians stranded in Wuhan during a speech in Seoul on Monday. Last week, he said that Cambodia would not evacuate its citizens from China — where most of the cases and deaths from the new viral strain have been reported — as some nations have in recent weeks.

Novel coronavirus (nCoV-2019) was first documented in late December in Hubei province, where Wuhan is located.

More than 20,000 cases of the virus have been confirmed globally, with 99 percent documented in mainland China, according to data from the U.S., E.U., China and World Health Organization (WHO) compiled by Johns Hopkins University, as of Tuesday evening.

The virus has resulted in 427 deaths, of which 414 were reported in Hubei, the university data set says.

Cambodia has confirmed one case of novel coronavirus: a Chinese man in his 60s who traveled to Sihanoukville from Wuhan and was quarantined in a provincial hospital last week after showing flu-like symptoms and testing positive for the viral strain.

Hun Sen had said in another Facebook post that he had informed Chinese leaders that he would like to travel to Wuhan to visit Cambodian citizens.

“The issue of climate change and the outbreak of the new coronavirus is not only China’s concern but also our concern,” he said. “We together have to find solutions and must not cause fear for the people.”

The post did not mention whether China would allow him to visit Wuhan, where the Chinese government has grounded flights and restricted travel in an effort to curb the virus from spreading.

The Associated Press reported that there are no commercial flights operating from Seoul, where Hun Sen was on Monday and Tuesday, to Wuhan, and the prime minister did not explain how he would reach the city.

The Chinese Embassy in Phnom Penh did not reply to requests for comment about Hun Sen’s travel plans.

Cambodia’s Foreign Affairs Ministry said in a statement that officials were staying in close contact with Chinese authorities regarding the health and well-being of Cambodian nationals in China, especially students.

The ministry and Cambodian consulate representatives in China created a WeChat messaging group to communicate with Cambodian students, and set up a channel of communication to keep parents informed about the health and safety of their children studying abroad, according to the statement.

Government spokesman Phay Siphan said he knew nothing about the proposed trip.

Asked whether he worried about the prime minister’s health if he went to Wuhan, Siphan said Hun Sen had never declined a battle.

“Wherever there is difficulty, he will go and resolve it,” said Siphan, noting Hun Sen’s trips to visit victims of two fatal construction collapses in the last eight months, and calm past tensions with Thailand at the border.

Keat Pocheang, a third-year student studying cybersecurity at Wuhan University, expressed his happiness over the idea that Hun Sen would visit a quarantined area in order to check on Cambodian students overseas.

“I admire Samdech for his bravery because currently, there are no leaders from powerful countries in the world who have visited their people in virus-infected Wuhan,” Pocheang said, using an honorific for the prime minister.

“We are, at the moment, in a dangerous area, which is called a battlefield between humans and virus,” he said.

Updated at 9:25 a.m. with comments from Prime Minister Hun Sen and Foreign Affairs Ministry spokesman Koy Kuong stating that Hun Sen will travel to Beijing instead of China’s Wuhan.