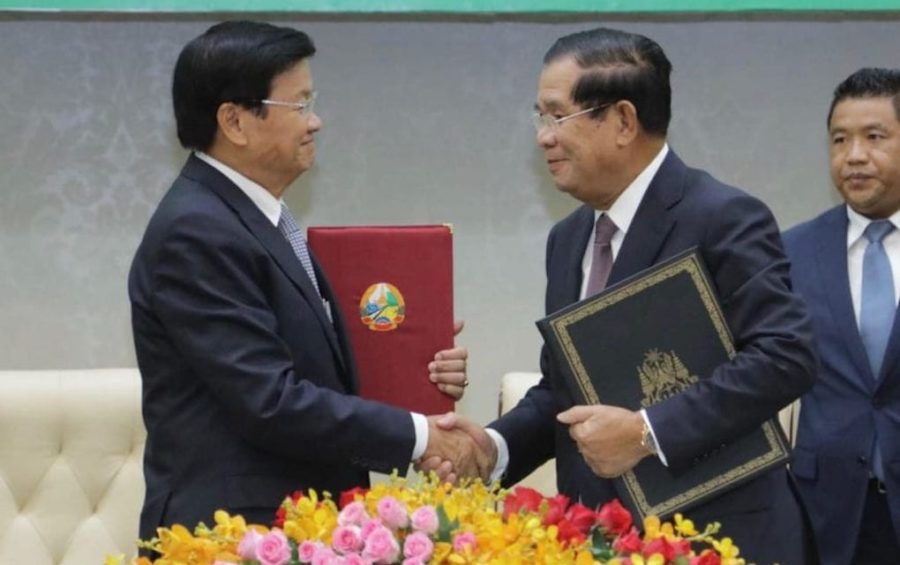 Prime Minister Hun Sen has asked Laos, Thailand and other Southeast Asian governments to assist Cambodia in preventing Sam Rainsy from freely returning to the country, as the exiled opposition leader has vowed to do in November.

Hun Sen on Thursday asked visiting Laotian Prime Minister Thongloun Sisoulith to prevent Rainsy from entering Cambodia via Laos during a joint press conference in which Hun Sen also said the government would send copies of an arrest warrant for Rainsy to other Asean member states.

“To the Laos People’s Democratic Republic, it is clear that [Cambodia] is seeking to be assured by Laos that it will not allow those who avoid prison and live in Paris and are ready to return to the country to enter through Laos,” Hun Sen said in a clear reference to Rainsy, but without mentioning his political rival by name.

“I would like to clarify that not only Laos, but also Thailand has already received the court’s warrant to arrest anyone who is subject to the court order, and we will also send the warrant to all Asean nations,” the prime minister said, according to state media outlet AKP.

Rainsy, who has not been in Cambodia since 2015, has vowed to return to the country on November 9 — Cambodian Independence Day — despite a number of criminal convictions and charges that he calls politically motivated. He said he would return with other leaders of the outlawed Cambodia National Rescue Party (CNRP), which was dissolved by court order in November 2017, eight months before parliamentary elections swept by the ruling party.

On Thursday, in response to a question from Hun Sen, Thongloun promised to uphold his counterpart’s request.

Speaking through a translator, Thongloun said, “If any guilty person crosses into Laos, whatever his nationality, to use Laos as a transit point to destroy another country, we will proceed seriously. We will strictly work to prevent this issue from happening.”

Cambodia’s National Police said in July that the authorities had received an arrest warrant for Rainsy, who would be detained upon entering the country.

Rainsy said in a Facebook post that his plan to return to the country on November 9 had not changed.

“I have been and will be travelling with my French passport over which the Hun Sen regime has no authority whatsoever,” he said.

“Democratic governments all over the world don’t give a damn about ludicrous politically-motivated sentences handed down by Kangaroo courts to democratic opponents fighting politically and peacefully against brutal dictatorships,” he added.

Rainsy said he was recently in Malaysia and Singapore, both in Asean, as well as Japan and South Korea, using his French passport.

Political analyst Lao Mong Hay told VOD that Hun Sen had made it difficult for the Laotian leader to deny his request due to the public setting.

The analyst urged Cambodian politicians to solve conflicts through compromise mediated by the king rather than by asking for help from other nations.

The questions, Mong Hay said, were “whether our king is thinking of intervening as before or not? And do both [politicians], together, support the idea of the king [mediating] or deny it?”