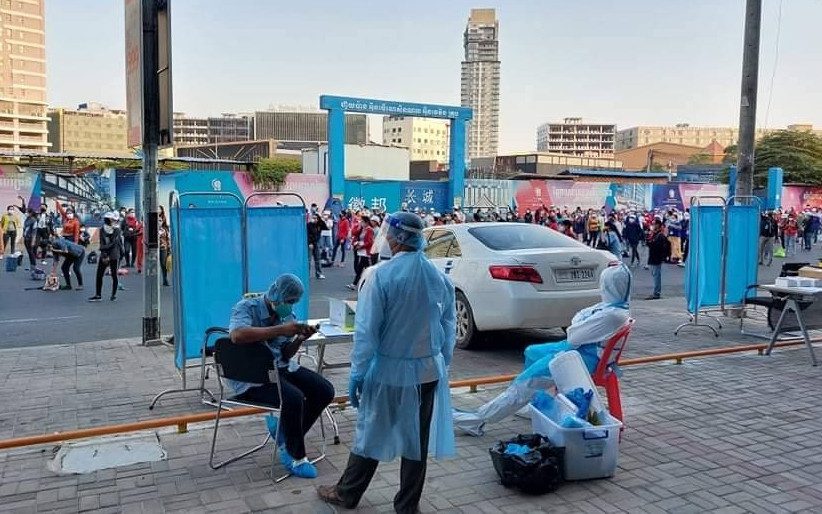 Cambodia reported around 100 daily cases over the weekend and early this week, but Hun Sen released an audio message Tuesday night saying more than 200 cases had been recorded that day. A Health Ministry announcement Wednesday morning said there were 223 new positive cases.

The prime minister said Omicron cases were on the rise, and that while most cases were in Phnom Penh, infections have started spreading in the provinces.

The prime minister said infections shot up during the Lunar New Year celebrations in early February because people and tourists were traveling. He suggested that large gatherings like weddings, other celebrations and religious events should limit their attendance, but did not specify if this was a new Covid-19 regulation. Previously, the government barred large gatherings, later easing the rules to allow for 200 guests at a wedding.

“People​ should be gathering less. Prevent drinking and also parties and keep distance from each other,” he said in the audio recording, stressing the need for booster shots.

The government has been focused on economic recovery, especially in tourism. Over the Lunar New Year, 1.3 million people traveled across the country, including Preah Sihanouk, Battambang, Kampot, Koh Kong, Pursat, Mondulkiri and Siem Reap provinces, the Tourism Ministry said.

Hun Sen has previously asked Cambodians to learn to live with Covid-19 as a “new normal,” and ordered a scaling back of rapid testing and eased restriction on gatherings in September. He initially also directed all Omicron patients to be sent to state care facilities, but reversed that decision allowing for home treatment of new infections.

Phnom Penh deputy governor Keut Chhe said that after listening to the prime minister’s message, city officials were “burning their arms and legs” to enforce social distancing measures in crowded places and at wedding ceremonies. He said existing measures will be reinforced but that residents were not very cooperative.

“We are working day and night. We already have Covid measures, However, people don’t really care anymore. They put many tables next to each other. Today we are telling them again to keep their distance and mask up in public,” Chhe said.

Last week, Phnom Penh governor Khuong Sreng said people were not telling officials if they had tested positive, and threatened legal action against them.