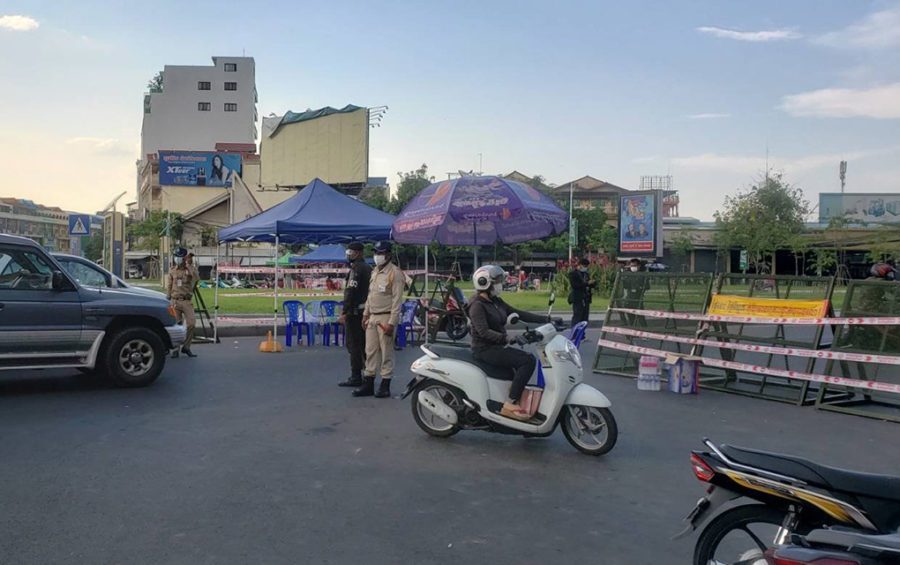 Authorities stop drivers at a barricade in front of the Cambodia-Japan Friendship Bridge into the Chroy Changvar commune “orange zone” on May 1, 2021. (Danielle Keeton-Olsen/VOD)

Prime Minister Hun Sen has suggested the country will move toward targeted lockdowns in small areas rather than citywide or provincial-level restrictions, as Phnom Penh’s lockdown nears the end of its third week, according to a government spokesperson.

“Samdech will open the municipalities, cities and provinces but there will be conditions against some areas,” he said, similar to Phnom Penh’s red, orange and yellow zones.

“In principle, samdech has said this, but for the implementation and measures on how we are going to implement it, we will know it on the 5th, about which locations we can cross and what will be the conditions — wait for the measure,” Siphan said.

The lockdowns of Phnom Penh and neighboring Takhmao city, originally due to expire on April 28, have been extended to May 5 so far.

Phnom Penh has already moved to a three-tier, color-coded lockdown regime that allows a loosening of restrictions in the city’s “yellow” zones.

However, the number of daily new Covid-19 cases has yet to wane, including 388 cases announced countrywide on Saturday, 730 on Sunday and 841 on Monday.

“We have cleared it gradually in the red zone, so samdech said there is no reason to lock down Phnom Penh municipality and Takhmao city,” he said.

According to widely circulated screenshots, Hun Sen made the comments online in response to a user, Tuo, who asked for an easing of restrictions: “Samdech, on the 5th, please genuinely open the roads.”

“[I, a] nephew, have been stuck in the province for a long many days, I have been unable to return to Phnom Penh. I have to come get vaccinated and the money has almost run out,” the Facebook user said.

Hun Sen’s account replied on Sunday suggesting an end to the lockdown, according to the screenshots, though the original comments could not immediately be found on Monday.

“There is no reason to continue to lock down. We will open the provinces or capitals and might close small areas that still have a high risk of infection,” he said. “With the previous lockdown, [we were] forcing [ourselves] in order to reduce the infection and death of our people. Please understand the shared challenges of the nation.”

Chea Sao Yi, who lives in Russei Keo district’s Toul Sangke commune, which was newly made a red zone last week, said there were still concerns about food.

“People are asking the authorities to harvest vegetables from fields,” Sao Yi said.

Phanith, 34, a garment factory worker in the commune, said some accommodations were completely locked up.

“We’ve asked people who are not in a very restricted area to go buy food and hang it on the wall so we can go down to pick it up,” Phanith, who would not give his full name, said.

“Before vendors could come closer to the rooms, but now they cannot come close.”

Rin Saly, a food seller in Meanchey district’s Stung Meanchey I commune, said sellers were still trying to evade restrictions, going out early to try to earn a living.

“When we go out, we have to watch our back, and front, and right and left because we are afraid of being arrested. Recently, a few vendors have been fined,” Saly said. But he said he had no money so he had to do something.

Ra, another food seller in the commune, said late last week that for now restrictions were still tightening.

“They’ve tightened security on all roads,” Ra sai. “Before, we could go out to buy products to sell.”

Mab, who works in a factory and whose husband is a motodop driver, said she even felt concerned about going out to get medicine for her child. “I relied on people who live outside to buy medicine for me,” Mab said.

Authorities have said that medical emergencies are valid reasons for traveling even amid the lockdown.