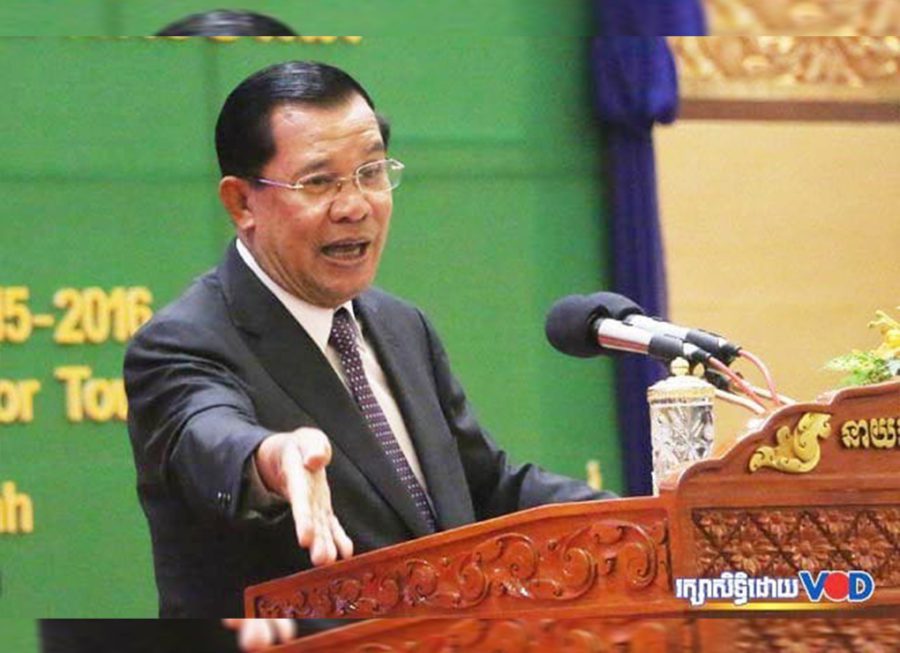 Prime Minister Hun Sen has ordered authorities to cut off the electricity supply over the coming Khmer New Year period of anyone who claims recent power outages are due to a government plan to build support for new hydropower dams.

Electricity shortages have roiled Cambodia over the past month, with hourslong scheduled outages in Phnom Penh and provinces around the country causing widespread irritation and complaints from businesses about loss of income.

Speaking at the opening of a new water supply facility in Kampot province on Tuesday, Hun Sen said some people had been making unjustified claims that the power shortages had been planned as a pretext to build new hydro dams.

Hun Sen has maintained that the power shortages are due to a drought affecting existing hydropower dams. In his Tuesday speech, he said authorities should locate the homes of anyone denying this to ensure that they have no power during the upcoming Khmer New Year holiday, which officially runs April 14 to 16.

People around the country typically flock back to their family homes for the extended break to celebrate the new year with music, traditional games and parties.

“Let them not have electricity during the New Year,” Hun Sen warned, before denying his government even had plans to propose any new hydropower projects. “It has been said that we cut off the electricity as a pretext to build additional hydropower dams. I ask, where will it be built? It’s not allowed [to be built] at Areng.”

Hun Sen appeared to be reacting to an article and radio segment by Radio Free Asia on March 30 about the rolling power outages around Cambodia.

The program featured interviews with residents who complained about the rolling power outages. It also featured Alejandro Gonzalez-Davidson, the founder of environmental group Mother Nature, who was deported from Cambodia in February 2015 over his activism but has continued to campaign against the construction of a new hydropower dam in the forested Areng Valley in Koh Kong province.

Businesses and investors have repeatedly complained about the high price and unpredictability of Cambodia’s electricity supply, and the complaints were renewed during last week’s important Government-Private Sector Forum in Phnom Penh.

Hun Sen said last month he planned to lease Turkish “powerships” to moor off the coast of Cambodia and help temporarily meet the country’s shortages.