Hun Sen Warns EU That if EBA Is Gone, Opposition Will Be Easy Pickings 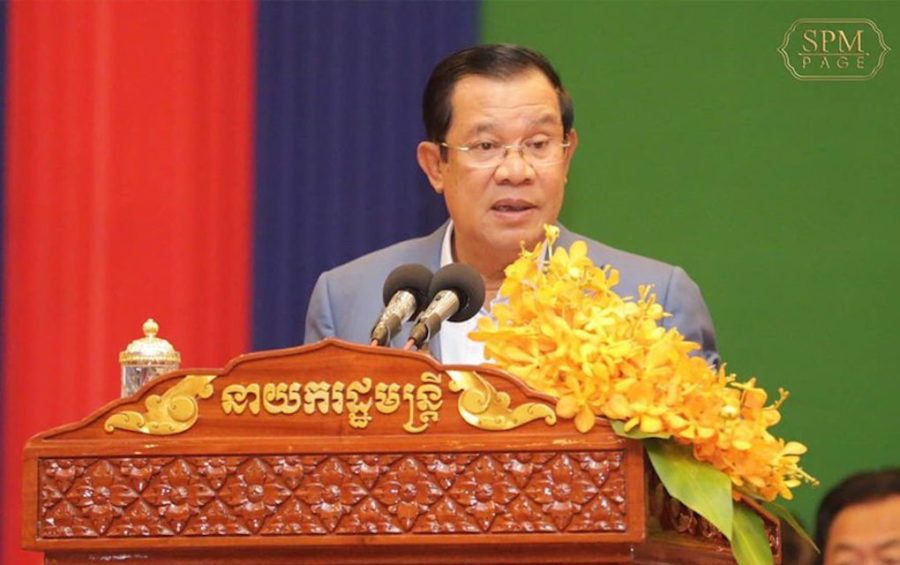 Prime Minister Hun Sen speaks at a graduation ceremony in Phnom Penh on December 11, 2019, in this photograph posted to Hun Sen’s Facebook page.

Prime Minister Hun Sen on Wednesday repeated a warning that Cambodia’s political opposition will be extinguished if the E.U. suspends duty-free trade, because the bloc will no longer have enough sway in the country to protect the party.

Hun Sen spoke at a graduation ceremony in Phnom Penh and discussed the E.U.’s “Everything But Arms” (EBA) agreement, which grants Cambodia duty-free trade access. The E.U. embarked on a review in February to potentially suspend the scheme over political and human rights concerns.

Cambodia’s reply to those concerns — including over the dissolution of the main opposition CNRP in 2017 — is due on Thursday.

Hun Sen said Cambodia had already told the E.U. that it cannot accept its condition to reinstate the opposition as it would violate Cambodian law. The Supreme Court dissolved the party two months after its leader, Kem Sokha, was arrested for treason for allegedly working with the U.S. to topple the government. Both he and the U.S. have denied the allegations.

Hun Sen warned that the opposition would be particularly hard hit by the loss of the EBA.

“Your [influence] with me will also be reduced, meaning you will have participated in killing the always-critical opposition group,” Hun Sen said.

His statement echoed speeches he made in January and February. In January, he said that if the E.U. carried out its so-called sanctions, “you have no right to advise me on human rights and democracy.”

“If we were to step on the necks [of the CNRP], it would be just like this,” he said of crushing the opposition, according to the Phnom Penh Post. “You appealed to [the E.U.] to destroy Cambodia. So it’s not necessary to keep you alive.”

A month later, in February, Hun Sen was even clearer about his threats against the opposition if the E.U. went ahead with suspending the EBA.

“We will eliminate former opposition forces, the CNRP’s network, and there will be no possibility of them contesting the 2022 and 2023 elections,” he said, according to the Khmer Times.

About 40 CNRP activists were arrested in relation to Rainsy’s promised return to the country on November 9. He had vowed to enter Cambodia and lead mass protests in an effort to unseat Hun Sen, however, he never made it the nation’s border.

Most of those arrested were charged with “plotting” to overthrow the government. More than 70 in total were charged since Rainsy announced his return plan in mid-August. Dozens were released on bail last month after Rainsy failed to return to the country.

Former CNRP officials have also been beaten in broad daylight by masked attackers who have eluded arrest.

Rainsy’s policy was that “having Sen means no Sy, having Sy means no Sen,” Hun Sen said, using shortened versions of their names.

“Now, in actuality, we only have Sen and no Sy.”

Political analyst Em Sovannara, however, said a suspension of the EBA could be just the first step — other sanctions remained possible, including freezing the assets of political figures and issuing visa restrictions.