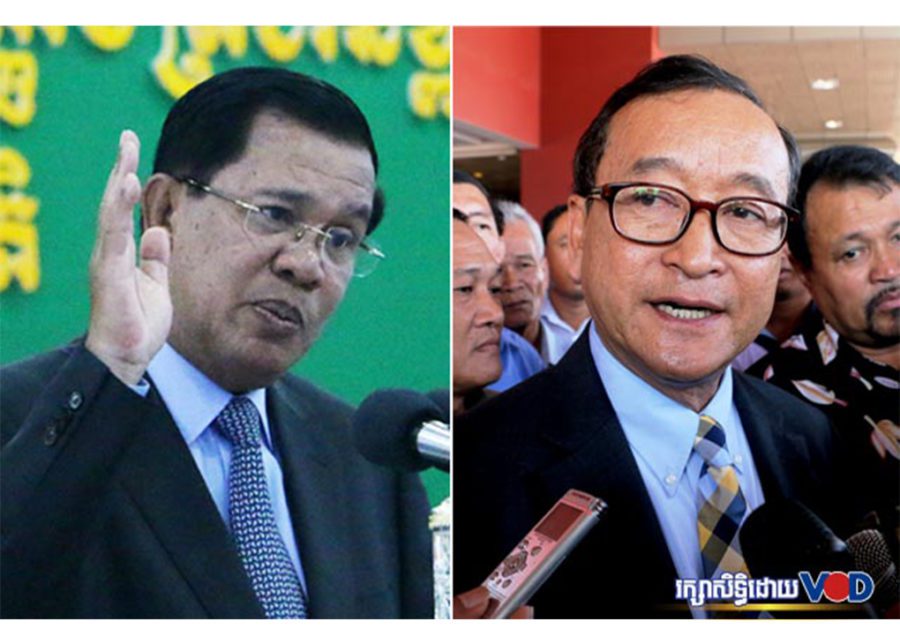 Prime Minister Hun Sen has warned former opposition leader Sam Rainsy not to attempt to re-enter Cambodian territory via an overland crossing, suggesting that usual rules against using machine guns on civilians may not apply to him.

Speaking at a graduation ceremony in Phnom Penh on Monday, Hun Sen said that Rainsy should not try to use land borders to skirt the many warrants issued in his name since he fled in November 2015 to avoid a two-year prison sentence.

“If you come through the border, that will be nice. I don’t know — I don’t know about the border, you have to know,” Hun Sen said, appearing to suggest that Cambodia’s land crossings were not as well-governed as its international airports.

“What will happen at the border? They set up trenches and have machine guns in those. Just for the moment, we ban them from using them against humans. That’s it. But you have to know: If you come through the border, that’s a big deal.”

Rainsy has lived in self-imposed exile in Paris since the November 2015 rekindling of a years-old defamation prison sentence for comments he made in 2008 about then-Foreign Minister Hor Namhong’s role in a Khmer Rouge prison camp. In the time since, a slew of new prison sentences have been added to his legal woes.

Still, the founding leader of the Cambodia National Rescue Party (CNRP) has repeatedly promised to return home in 2019 — even as he has refused to specify a date for his return and at times made comments appearing to express some reluctance.

There have been some concerns about airlines not allowing him to to board flights into Cambodia on government orders, leading to rumors of plans for the opposition leader to arrive overland flanked and defended by supporters rounded up by the CNRP.

Hun Sen has said that he has no plans to seek another pardon for Rainsy. During his speech on Monday, he also threatened the CNRP “ad-hoc” committee that is purportedly arranging the Rainsy’s imminent return. The prime minister said any opposition officials banned from politics should steer clear of helping Rainsy.

“For those who do not get their rights, do not secretly do any activities and do not organize your forces,” Hun Sen said. “These ‘ad-hoc’ committees everywhere have to immediately [stop their activities]. If they do not do so, be careful.”

Earlier this month, the Phnom Penh Municipal Court issued arrest warrants for eight CNRP officials — including Rainsy himself — seemingly for trying to organize his return.

Previous to his current period of exile, Rainsy had most recently lived in Paris to avoid arrest warrants between 2009 and July 2013, when he secured a royal pardon upon the request of Hun Sen and nearly led the CNRP to a surprise victory in that month’s national election.

He then launched protests claiming election fraud, which were lethally repressed by the government in January 2014. The CNRP soon after entered a deal with Hun Sen to reform the country’s electoral system but it began to fall apart after Rainsy fled Cambodia in November 2015 when his first arrest warrant was issued.