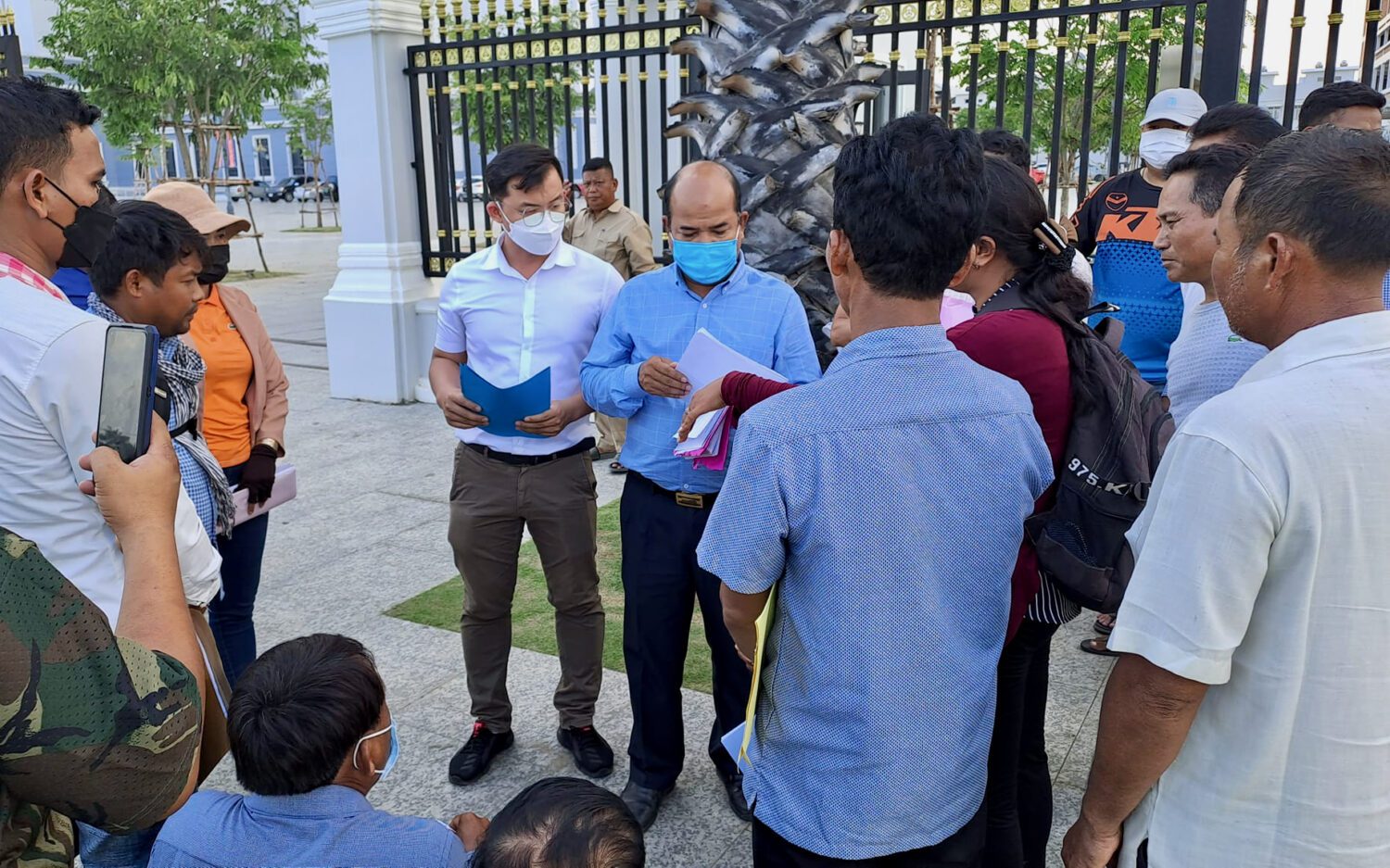 About 300 people from three provinces are urging three ministries and the Prime Minister’s cabinet to speed up solutions for their land disputes that have dragged out for more than a decade.

Tuon Vannak, a villager from Boeng Khyang commune in Kandal Stung district, said his community was petitioning again after failing to get a solution for their land dispute around the development of a new airport meant to serve Phnom Penh.

Vannak said he had submitted a petition five times over the course of the dispute but the authority has not offered fair compensation, promising only $8 per square meter while the price of land in the surrounding area is nearly $100 per square meter. Authorities have also deployed force to threat and intimidate people who dare to protest, he said.

“I think that it is really unfair for the people, and our property all has hard land titles,” he said. “I have not done anything against the law. I follow the law because I am a citizen who holds legal ownership.”

There are 106 families remaining in Kandal Stung — with more than 40 hectares of land total — who have not agreed to accept the compensation of $8 per square meter on the grounds that it’s insufficient to relocate elsewhere, according to Vannak.

Phorn Sophal, a community representative from Tbong Khmum province, told VOD that more than 100 people in Memot have or are currently facing court complaints in relation to the dispute and four representatives had been previously jailed under charges of “incitement” and “extortion.” Sophal is among those who were sentenced to a year in prison over an incitement charge and has just been released after serving his sentence.

“We protested and asked for a solution but now face charges. I think it is a kind of violation of freedom of expression as well as [our rights] in demanding a solution … I asked the government as well as the officials at all levels to make sure not to use the court system to put pressure on the people who are involved in land disputes,” Sophal said.

The Sre Praing and Boss Snoar communities have been involved in a dispute with Harmony Win Investment and businessman Men Chantheoun since 2014 over the development of 785 and 445 hectares of land, respectively, but have yet to see a solution, residents said.

Kong Lam, 76, a villager from Chan Moul commune in Tbong Khmum’s Memot district, said border authorities banned people from farming on their 80 hectares of land even though the demarcation of the land had already been completed. She said she asked the government to speed up a solution because residents have no land to farm and are struggling to make ends meet.

“People, animals, as small as a thumb, live for food, live on food,” Lam said. “If there is no food, what do people live on?”

Ministry of Land Management spokesman Seng Lot could not be reached for comment.

Residents from the three provinces said the Ministry of Land Management, Interior Ministry, Prime Minister’s Cabinet and the Agriculture Ministry had accepted the petition but had not yet responded.

Nhil Pheap, a community coordinator for the Cambodia Coalition of Farmer Community, said that threatening people with force to prevent them from protesting could not end the dispute or stop people from speaking out.

“People need land, people need to survive,” he said. “If there is no solution, the struggle will keep happening.”