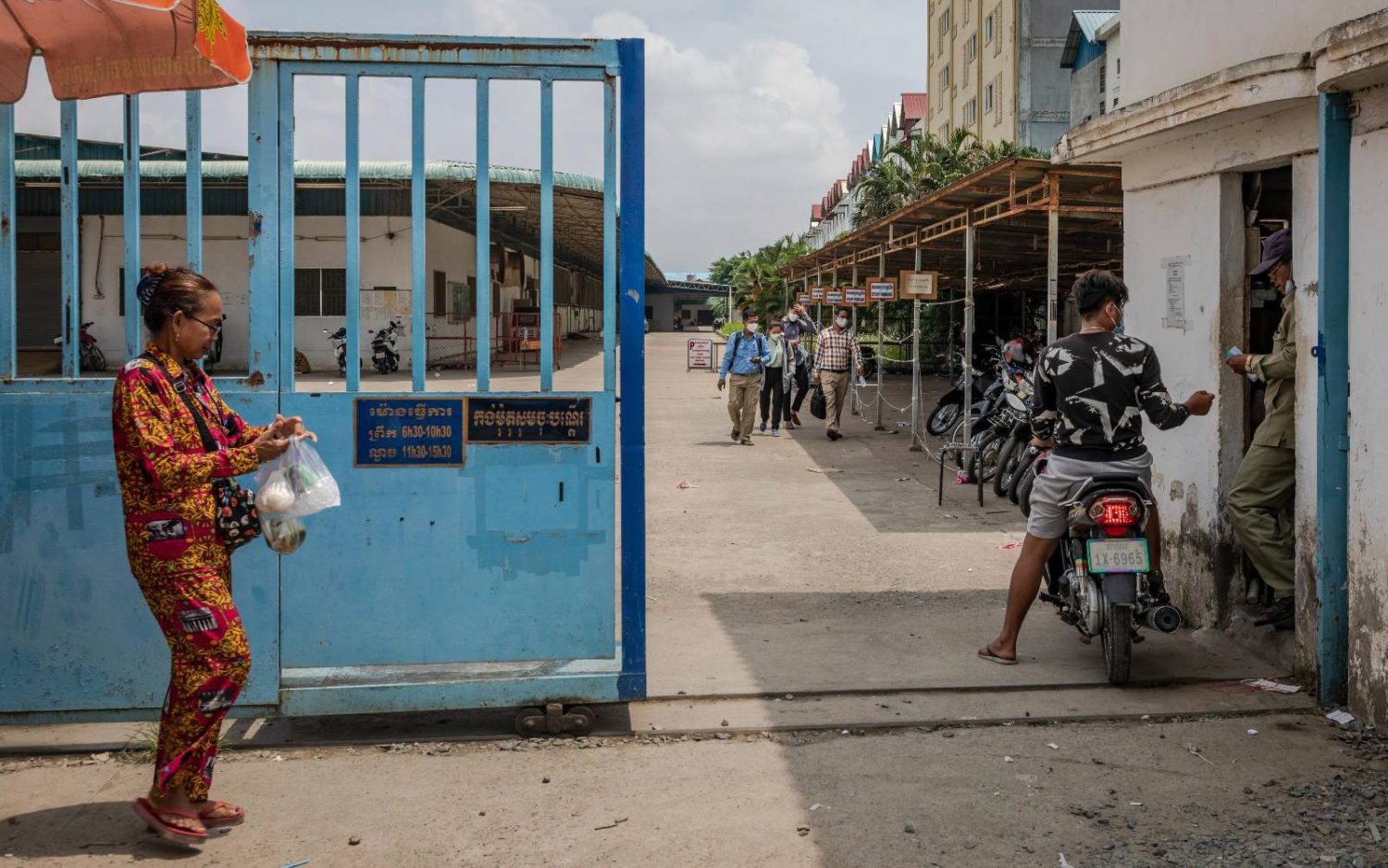 A man drives a motorbike into the gate of Canteran Factory in Phnom Penh’s Pur Senchey district after a protest disbanded on the morning of April 19, 2022. (Roun Ry/VOD)

About 200 factory workers protested on Phnom Penh’s Veng Sreng Blvd. for about an hour Tuesday morning after they learned that their struggling factory had removed valuable equipment from its premises.

Sum Vanny, a 63-year-old factory worker, said Canteran Apparel was in the process of shutting down, and had promised after a couple of protests that they would not remove equipment. But they returned from the New Year holiday to find some machinery missing.

Workers commonly try to prevent equipment removal while factories are closing in order to guarantee their final payments. In 2020, workers camped outside the Dignity Knitter factory in Kandal for more than 10 months seeking final salaries and compensation.

Vanny said after the Tuesday protest that Canteran Apparel had been irregular in paying workers for some time.

“Its plan is to shut down,” she said. “After they take all the machines, they will fire us. So before they fire us, yes, our workers blocked the road, because we want people outside to know about it since we on the inside cannot solve it.”

Many workers had already quit, but around 300 mostly-senior workers with 10-20 years of experience remained, Vanny said. A Garment Manufacturers Association in Cambodia listing shows the factory once had as many as 1,100 workers.

Another worker, Kim Y, said traffic was disrupted for about an hour, but the workers dispersed after authorities promised to help workers negotiate with the factory.

“They promised that they would not remove any machines, but after New Year, when we arrived, we had lost a generator,” Y said. “They didn’t follow their promise, so the workers were angry.”

A worker who declined to be named alleged that the generator and other equipment had been moved to a new location, and it appeared the factory was trying to evade the full costs of closing down while reopening elsewhere.

A listed phone number for Canteran Apparel did not connect, while three workers would not give contact numbers for their supervisors.

Pur Senchey district’s Choam Chao I commune chief Kang Vang said the involved parties would meet at the district hall on Wednesday to negotiate toward a solution. Vang also denied that the workers had blocked the road, saying they merely stood on the roadside by the factory. Photographs from the morning show traffic in at least one direction completely blocked by the protesters.