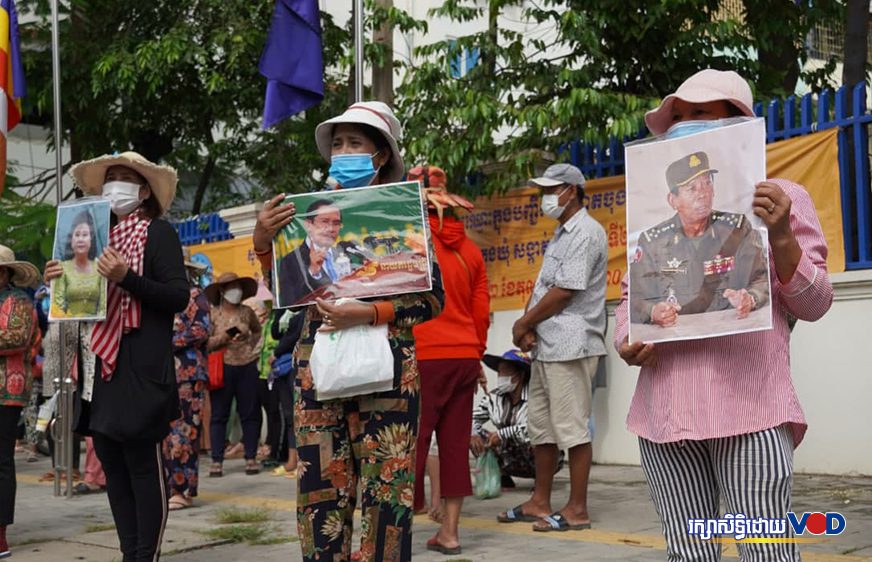 Residents of Prey Tea I and II villages hold photos of PM Hun Sen and his wife in a protest in front of the Pur Senchey district hall on November 8, 2021. (Tran Techseng/VOD)

Hundreds of Phnom Penh families protested in the capital on Monday, highlighting two ongoing and long-standing disputes in the city.

The protests coincided with a Prime Minister Hun Sen speech at a ministerial event on Monday where he instructed Land Minister Chea Sophara to solve land disputes through extrajudicial means.

“Work hard to resolve land issues outside the judiciary with integrity. If there is integrity, we will be able to resolve the issue,” said Hun Sen, adding that this would prevent the disputes from escalating.

More than 200 families from Russei Keo’s Svay Pak commune asked the government to provide them land titles and rejected accusations from local authorities that they were living on the side of the road.

Hy Sokhuy, a representative for the 244 families, said people had lived on the contested land for 20 to 30 years, but that authorities claimed they were living alongside the road. They had asked for land titles but local officials insisted on moving them to a new but remote location, she said.

She didn’t know what the government wanted to do with the land but was unhappy that big developers were allowed to use land as they wished while residents were being threatened with eviction. The residents were not against development, but they wanted justice, Sokhuy said.

Around 20 families were forcibly evicted in nearby Kilometer Pram Muoy’s Boeng Chhouk A community earlier this year with officials saying the land will be used for public development.

Seng Sam, another resident facing eviction in Svay Pak, said it would be hard to make a living at a remote relocation site and wanted a land title for the space they currently occupy.

“If there is no solution, I will try and keep protesting because we have lived here a long time, since I was young till now with grey hair and more than 60 years of age,” Sam said.

Vann Sophat, business and human rights coordinator from Cambodian Center for Human Rights, said in general, people don’t want to move through land swaps because based on past experience, they have seen that people who agreed to land swaps have mostly faced hard living conditions.

“Generally, we see that evicted people or [those who] have land that is swapped, they have no better living conditions as compared to their old place. That’s why they don’t want to move,” he said.

Another 180 families from Prey Tea I and II villages were protesting in Pur Senchey’s Choam Chao III commune against a military unit that had claimed four hectares of land coinciding with the families’ land.

Sok Chea, a representative for the families, said the dispute dates back 20 years and residents were waiting for intervention from the Defense Ministry, which had allocated the land to their people in 2017. Army commander Hun Manet had also promised to find a solution for the dispute, Chea added.

The dispute was with Sok Pang, the commander of the 91 Air Defense Battalion, who had applied for land titles for the four-hectare plot.

“We keep expecting a solution based on the decision of the top level, and now it emerges the case of Mr. Sok Pang had requested for land titles including the four hectares,” Chea said.

“It is unfair for us and we came to ask and want to know about the clarification [from the district ].”

Initially the land was allocated to 35 families, but another 145 families were later given the same land, so the total 180 families in the two villages agreed to share, residents said.

Men Kim, a 65-year-old resident, said the dispute initially included nine hectares of land but that some of it was given to military families, who then sold it to other people.

She wanted the government to quickly solve the issue, fearing the remaining land could be lost to development projects.

“One day, it will be gone because people know that quietly one piece of land will be gone … people still have no trust,” Kim said.

Pur Senchey district governor Hem Darith said he had handed over all the documents to senior officials and did not sign off on Pang’s request for the land because the claim to the land was being contested.

“It is beyond our competency. We can only make compromises. Whatever decision is up to the superior. I am not the one who signs the land titles. The chief of land management does it but the initial documents are from me.”

He did not sign it because the land was being claimed by the people as well, he said, and that a compromise needed to be found.

“I want to clarify that I have nothing to do with encroaching on their land. It is a [military] base and where did they get documents allocating land into two and three pieces? I do not know.”