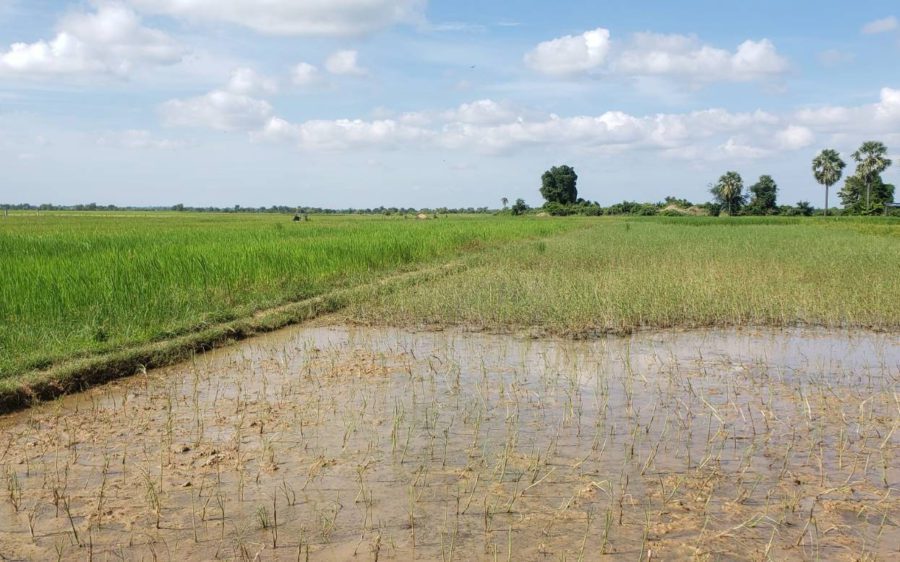 A dozen men were still crowded in front of a Roka II village home at lunchtime, two hours after a 500-strong protest had dispersed Tuesday morning. The men took turns recounting the protest and condemning a group of five brokers who they fear will cut them off from the lake they have fished and farmed for generations.

Though unwilling to give their names, the group said they were from five villages protesting against five brokers who they suspected of trying to fill or otherwise modify Kandal province’s Boeng Khyao lake. The villagers knew all five alleged brokers’ names, but they claimed not to know their phone numbers, nor their true intentions for the lake.

“The thing that is unclear is whether they will fill up or fix the lake,” one of the men told VOD. “Our people are concerned because they are afraid that [officials] secretly sold the lake so the villagers want the district to clarify about whether the lake has been sold or not.”

Hundreds of Khsach Kandal district residents are enraged about a small group of brokers who have promised to “restore” the lake with few details about their plan, paying some residents for permission to do so, but local-level officials claim they know nothing about the plans to modify the lake.

Protesters gathered at the Roka Chonloeng commune hall at 8 a.m. Tuesday to urge local officials to intervene after land brokers had collected thumbprints and given money to residents from one of the five villages, Roka I, that use Boeng Khyao lake. The men chatting together after the protest told VOD that the brokers were five men, all from Roka I village, who said they would restore the lake.

One of the anonymous residents of neighboring Roka II claimed some of the residents who received money knew what they were signing, but others did not realize. But he had heard his neighbors in Roka I received around $350 from five men in August, spurring villagers to hold an initial protest on September 18 and the second on Tuesday.

“[The brokers] are hiding something. … They are land brokers in the village. It is not clear,” he said, referring to the letter that Roka I residents thumb-printed and the brokers’ larger intentions. “The land around the lake has mostly already been sold.”

Roka Chonloeng commune clerk Yann Roeun said the protest’s intention was split: Some were concerned about losing the lake while others wanted the $350 that Roka I residents received.

The land around Boeng Khyao lake had been sold, mostly to buyers from Phnom Penh, Rouen said, but the lake itself should be state property. He was currently asking the provincial governor to request hard land titles for the area surrounding the lake in order to settle disputes.

But he claimed he had no clue why the five men were interested in “restoring” the lake, nor could give a clear idea what restoring the lake would entail. He said they had found out about the event after a protest in September, but said he had not asked any other officials nor the men who claimed interest in modifying the lake.

“We didn’t know when [residents] were giving thumbprints,” he said. “There was no recognition [for the lake restoration] from village, commune, district authorities.”

Lakes and land around these water bodies in nearby Phnom Penh, such as at Boeng Kak, Boeng Tamok and Boeng Tompun lakes, have been filled in the past decade and resulted in disputes and controversy.

Chan Thy, the Roka I village chief, also claimed not to know about the lake restoration project: “I have nothing to do with it.”

He said he knew the five alleged brokers were residents in his village, but he never made any effort to ask the men what they were planning to do to the lake.

Instead, Thy said he asked the commune chief to look into the issue in early October.

“The commune has the right. I [as a village chief] have no right to intervene. We just assist in finding the solution.”

Though both officials knew of the five men, they claimed not to have contact information for them nor know of their plans. Kandal’s deputy provincial governor Nov Peng Chandara also said he did not know about the case.

Echoing officials, the residents of Roka I and Roka II villages who spoke to VOD said the land around the lake had been sold. One of the men gathered in Roka II said land around the lake could sell for $10 per square meter, and most of the villagers had already sold their land, some as early as 2008.

While Hoeun Nuong of Roka II said she planned to hold onto her 1.5 hectares of land near the lake for as long as she could, her sister Hoeun Noch said she had to sell her half hectare when a relative was sick.

But both sisters said they joined Tuesday’s protest because the process of asking to see villagers’ identification, collecting thumbprints and giving money sounds like a sale, rather than a plan to fix the lake.

“They’re giving money to restore the lake. … This is strange. We really doubt [their claims], so this is why we protest,” Noch said.

“If they fill up the lake, this village will fill up with water.”