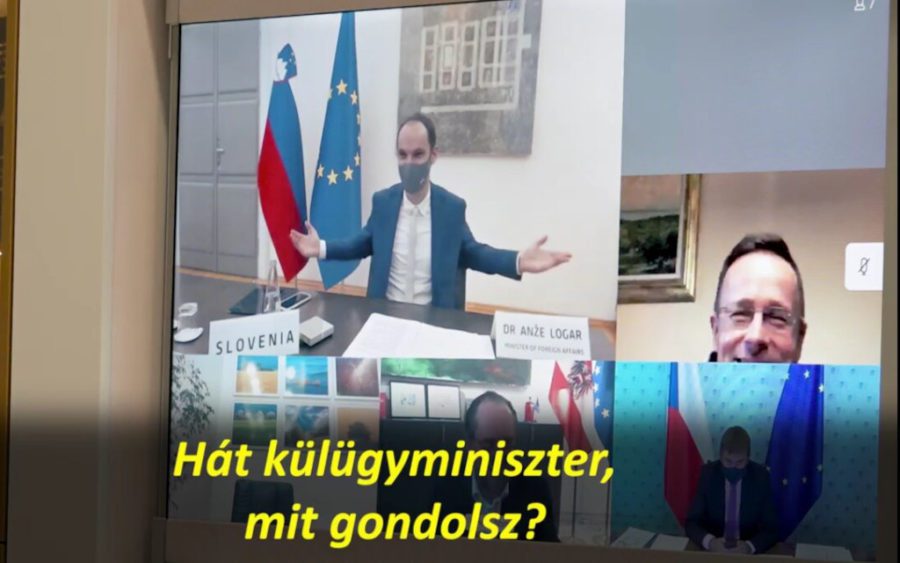 Hungarian Foreign Minister Peter Szijjarto and European counterparts during a video conference call posted to his Facebook page on November 6, 2020.

Hungarian Foreign Minister Peter Szijjarto shared some laughs with his counterparts in Austria and Slovenia last week about his recent visit to Cambodia, which has triggered renewed Covid-19 closures in the country, and the quarantine and testing of more than 1,000 people, including Prime Minister Hun Sen.

After explaining to his colleagues during a video conference call that he had tested negative for the virus on Monday last week, then traveled to Cambodia and tested positive after arriving in Thailand on Tuesday, Szijjarto cheekily asks them to “guess” what he had gotten up to in Cambodia.

Szijjarto says he is showing some coronavirus symptoms, including headache and cough. “But the problem is the pain in my muscle,” he adds.

With a smirk and a chuckle, Austrian Foreign Minister Alexander Schallenberg then asks Szijjarto, “What did you do in Cambodia?” The query is followed by a few laughs from at least three of the four ministers present on the call.

“I wanted to go to Cambodia,” Schallenberg adds, apparently seeking to explain his question.

“What, what … what would be your guess?” Szijjarto replies, grinning.

The Hungarian official, who spent less than 24 hours in the country, could not have fully followed Cambodia’s Covid-19 entry protocols, which require testing upon arrival and quarantine measures while awaiting results, although officials have not answered questions about whether he was tested in the country.

He had spent the day in Cambodia on Tuesday, signing three agreements with senior Cambodian officials at a ceremony presided over by Hun Sen. Szijjarto was photographed with various Cambodian officials, including the prime minister, not wearing masks or social distancing. Some of these officials then traveled to the provinces for other events on Wednesday last week.

As of Wednesday this week, four people have tested positive after having met Szijjarto last week: Hungary’s ambassador to Vietnam and Cambodia, a Cambodian bodyguard in Szijjarto’s security detail, a ruling CPP lawmaker and a senior Agriculture Ministry official.

A Hungarian diplomat in Bangkok also tested positive for the coronavirus after having sat in the same car and dined with Szijjarto on Tuesday in Thailand, the Associated Press reported.

On Sunday, schools in Phnom Penh and Kandal province were announced closed for two weeks, while cinemas, karaoke bars, gyms and other venues have been shut nationwide as a precaution, after having reopened earlier this year. The Health Ministry on Tuesday also advised against people attending weddings, concerts and other events involving crowds.

Schallenberg, the Austrian minister who cracked up alongside Szijjarto and Logar during the recorded conference call, tested positive for Covid-19 in October after attending an E.U. meeting.

Throughout the video, Czech Republic Foreign Minister Tomas Petricek appears to be glancing down and typing on his phone while the other three giggle. Slovakia’s foreign minister Ivan Korcok is seen arriving to his chair in the last five seconds of the clip.

Spokespeople for Cambodia’s Foreign Affairs Ministry and the Hungarian government did not respond to questions from VOD as of Wednesday evening.

UPDATE November 13, 2020: Since publishing this article, the video in question was removed from Peter Szijjarto’s Facebook page. It was downloaded earlier and is embedded above.