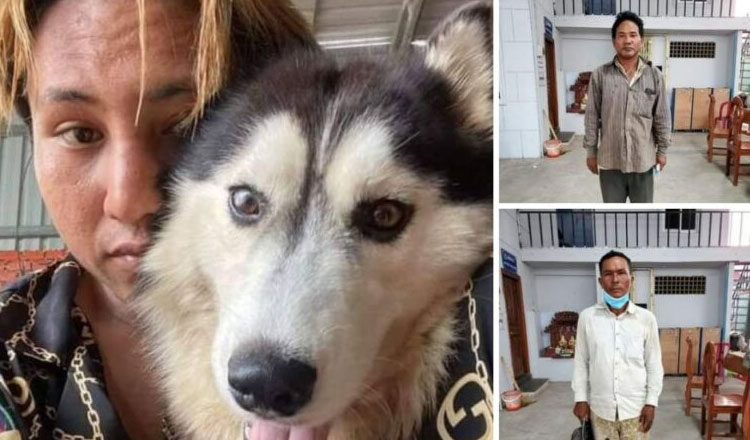 On left, the owner of three dogs allegedly killed and butchered by a group of nine workers. At right, two of the suspects. Photo from Facebook.

Kampot authorities have arrested nine construction workers for allegedly killing and butchering three husky dogs for consumption after the dogs wandered into the site from a neighboring house.

Kha Den Na, spokesperson for the Kampot prosecutor’s office, said on Tuesday that nine suspects “and other accomplices” have been charged with theft with aggravating circumstances under Article 357 of the Criminal Code. The crime is punishable by three to 10 years in prison for thefts accompanied by acts of violence.

The dogs’ owner, Ly Thydin, filed a complaint to commune police on March 11, he said.

When she found that her huskies were missing, she walked around the area to find that they were being prepared as food next door, Channy said.

According to a relative of Thydin, who declined to give his name, the theft happened on the morning of March 11. Around 7 a.m., Thydin put the three dogs out in the house’s yard, but they left through a hole in the house’s fence, the relative said.

The dog owner’s son, Soeung Bunthon, came home around 11 a.m. and found the dogs were missing. He and his mother searched the neighborhood and found them cut into pieces at the construction site, according to the relative.

“[The construction workers] said they killed them because they bit their chickens. We don’t know if chickens were killed, but there were no dog bites,” the relative said, adding that two of the dogs were bought in Thailand about two years ago and the third about a month ago.

Bunthon posted a video on TikTok of him confronting the workers.

“My dogs have died. Why are all of you so brutal? What did my dogs do to you? Why did you attack my dogs?” he says in the video, calling the dogs “my children” as he cries. The family had five dogs total before the incident, he says.

Animal welfare group Four Paws said in a statement that it was “a heartbreaking moment that should never have happened at all.”

“We have no words to describe the feeling of this loss, and as a community of pet lovers, we can only express our condolences and pray that his pet may rest in peace,” it said, calling for an end to Cambodia’s dog meat trade.