‘I’m Waiting for My Wife’: Cambodian Victims of Poipet Fire Are Unaccounted for 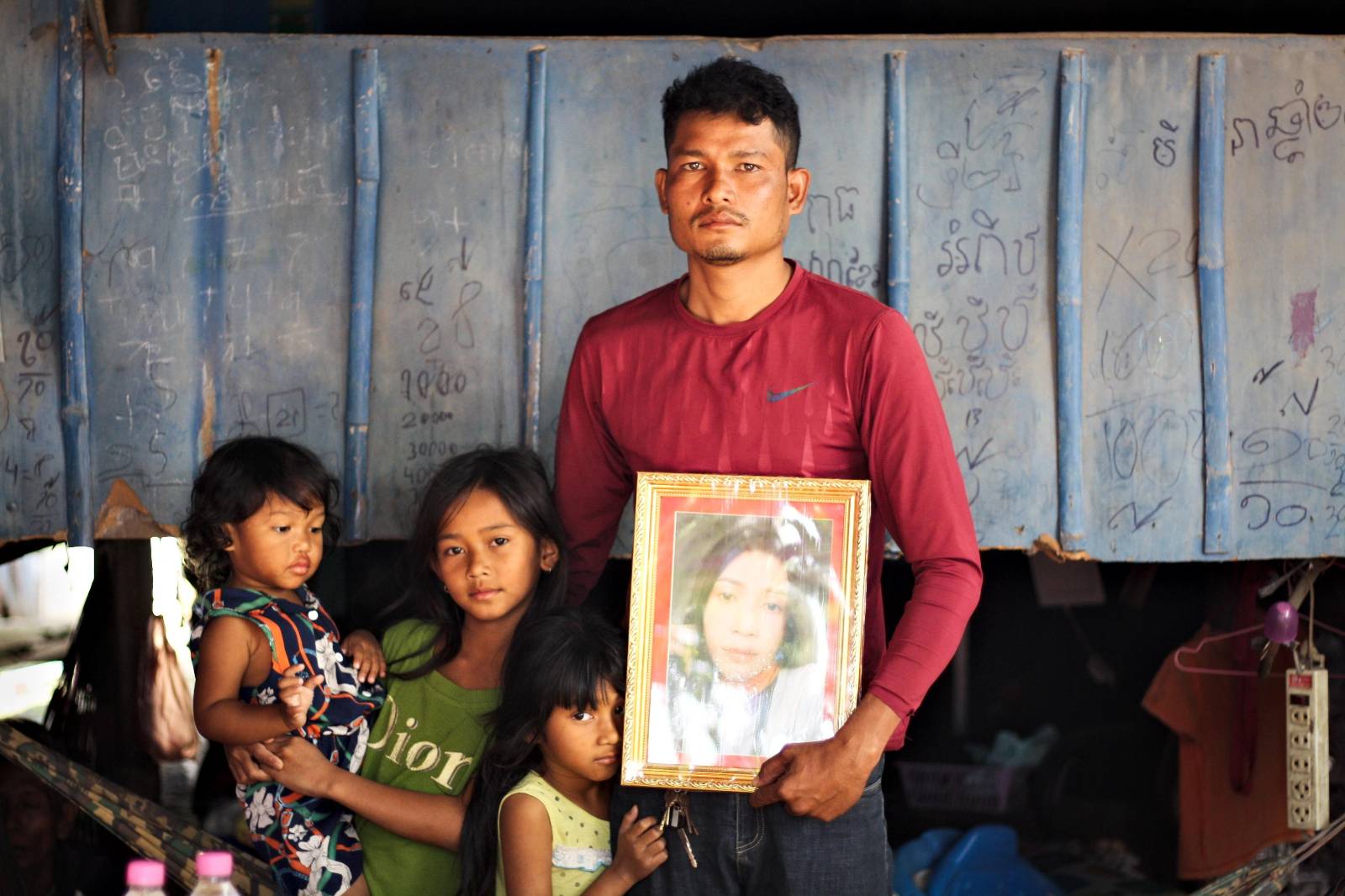 Khim Vong holds a photograph of his wife, Sam Sreymom, who is missing after a fire at the Grand Diamond City Casino, with the couple’s three children on December 31, 2022. (Michael Dickison/VOD)

POIPET, Banteay Meanchey — Khim Vong, 31, has received no official word about last week’s casino fire, or about his wife who was inside and hasn’t been seen since.

Officially, there are still no confirmed Cambodian deaths, and the search for bodies has been stopped.

But Vong’s wife Sam Sreymom hasn’t come back since her night shift at Poipet’s Grand Diamond City casino. The family say they feel neglected, as they gather at the couple’s house on Saturday after holding a Buddhist ceremony in the morning to pray for her.

Vong learned about the fire on Thursday morning, and rushed to the casino to pick up Sreymom and bring her home. He found scenes of chaos, but she wasn’t there.

The family went to city hall to give authorities a photo of Sreymom to help find her. They went to a local pagoda where recovered bodies were being kept, and were shown photos of four or five unidentified bodies suspected to be Cambodian, but Sreymom was not among them.

“She was wearing a black shirt,” Vong recalls, saying he hasn’t given up. “We’re praying for her to return home.”

Vong and Sreymom’s three young children take turns lying together on a hammock and peering around at the visitors at the house.

Provincial authorities initially indicated there could be dozens of bodies stuck inside, but officials are increasingly wrapping up the case.

At a press conference earlier Saturday, National Committee on Disaster Management head Kun Kim says 26 people had died, 25 whose bodies were recovered and another who died at a Thai hospital. Those 25 bodies included 16 Thai nationals, one Malaysian, one Nepalese and seven still unidentified.

Kim adds that the search efforts were stopped because “we have searched all the rooms,” despite authorities previously saying it was because the buildings were structurally unstable.

In a discussion about how long to keep the unidentified bodies — with police saying 45 days are required — Kim moves to quickly cremate the bodies for lack of funds to keep them frozen. “Where will we get the money to get the gasoline for the car? In 45 days, the people who are stationed with the truck and the drivers will be dead.”

A Thai representative says at the conference that four Thai families are still looking for missing relatives.

Provincial spokesman Sek Sokhom says on Monday that there are six unidentified bodies left, and three could be Cambodian because families had come looking for them. The casino site is being prepared for demolition, he adds.

At Vong’s house, relatives around him chime in with stronger words: “The family wonders if something is being hidden,” a male relative says over a can of Ganzberg. “If the authorities really cared, the head of the commune should come to ask about the people who worked at the casino,” an older woman adds. “They don’t care about the people who are missing,” the male relative says.

Sreymom worked on one of the floors at the casino, which was rented out to a KTV for worker accommodation, Vong says, but neither business had contacted him so far. A woman whom Sreymom worked with is also missing, he adds.

Vong says his wife made just over $200 a month working from 8 p.m. to 8 a.m. cleaning rooms on the hotel’s third floor. The casino provided employment, but the booming development around Poipet has been “high risk,” he says. He wonders how the casino could have allowed the fire to get out of control.

Vong has a determined look on his face as he describes Sreymom as strong-willed. “She’s very generous,” Vong says. “I’m waiting for my wife to send word.”