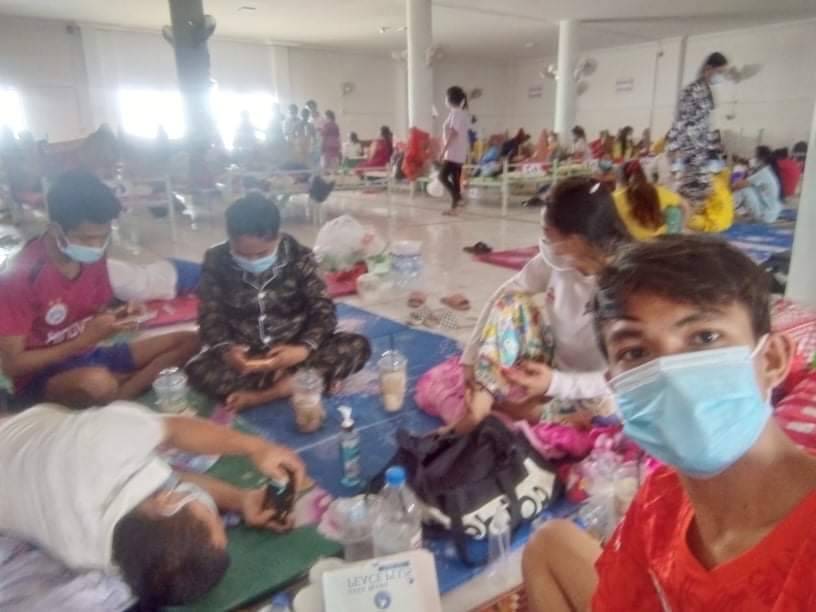 Sambath Sotherith takes a masked selfie with patients in a Covid-19 treatment center in Kampong Cham province in the background during his admission in June. (Supplied)

Nget Sineath entered a treatment center at Kampot province’s Preah Reach Phea High school about two weeks ago with a high fever and no sense of taste. Though she said the center was noisy, the vegetable vendor was able to sleep after the first few days, and her more severe symptoms of Covid-19 faded. The bigger problem was the bathroom: All the patients in her building, which includes multiple classrooms with about 20 people per room, share seven toilets.

“Some people keep up sanitary practices, but some of them, they do not care at all,” she said by phone from the treatment center.

Because she was still able to socialize with her friends in the evening, Sineath, 34, said she was able to calm her nerves and tolerate the stay. She’s also grateful to arrive when she did. New arrivals in the treatment center have had to sleep in tents, or stay in a campus building with fewer bathrooms, she said.

“We are a bit luckier than the other building” on the school campus, she said. “They did not have enough bathrooms because I saw more patients coming every single day.”

The Covid-19 patients who find themselves in provincial and Phnom Penh quarantine centers say they have struggled with the stress, boredom and lack of information and doctor attention during their stay, but several people said dance breaks and meditation helped them power through the confusion and anxiety.

Cambodian officials reported more than 900 new cases of Covid-19 each day in the seven days leading up to Monday, with 830 new cases on Tuesday. The number of active cases across the country has remained above 7,000 since July 5.

Taxi driver Hun Bunthoeun, 39, said he landed in an unexpected destination — a Stung Treng province Covid-19 treatment center — last Monday as he was driving to the province from Phnom Penh. One of his passengers tested positive on a rapid test required at a Stung Treng border checkpoint, and though he tested negative, he was put into the treatment center with few instructions as to what would happen next.

“I’m not sure how many days before I will be able to get back home, because they haven’t informed me yet,” he said. “I just heard some people say 15 days they will allow us back home and on the same day we will get another Covid test.”

Bunthoeun, a resident of Stung Treng, said he considered escaping the quarantine because there were few guards on duty, but he decided against it, knowing health authorities had already taken his contact information and home address.

So he stays at the treatment center, feeling healthy but bored and making conversation with the two men staying in his quarantine room.

“I just wash my clothes and clean my room, that’s what I always do,” he said.

Sambath Sotherith, 27, said he had no clue how he got Covid-19, saying he and his family in Kampong Cham province had just visited the marketplace and shops in town they’ve always been to. However, three members of the family tested positive in early June and were sent to a quarantine center in the provincial town’s Mekong Hotel.

While Sotherith’s symptoms were mild — a fever and sore throat — his father, who has a lung disease, started developing severe symptoms.

“We all stayed at the same place at first, but only my father started having trouble breathing and the doctor brought him to the ICU room,” he said. “They put my father on oxygen and an IV for 9 days.”

Sotherith’s father tested negative after 17 days alongside his son, but the elder asked to stay in quarantine for longer because he has a preexisting lung disease and was worried about his health.

During Sotherith’s stay, he received medicine for fever three times a day, in addition to three meals daily, though he says he could not eat at first out of nervousness about Covid-19.

“Every day my routine was repeated like a circle. I wake up, do exercise, eat and sleep,” he said. “The main focus is to take as much rest as I could during the treatment.”

Most of the patients’ complaints revolved around the fear of the disease and the mental stress of waiting for their escape from the quarantine center.

Choub Chanda, a 38-year-old garment worker, said she was admitted into a Poipet school converted into a testing center on Thursday with some of her coworkers at Hi-Tech Apparel in Banteay Meanchey province. She said a doctor regularly offers her medicine to treat her symptoms, which include a stomach ache and fever, but she still feels anxious about being in the center.

“At first, I felt so broken and scared at the same time,” she said. “After I heard that I tested positive for this disease, I could not believe it. I’m quite stressed here because I could not go anywhere. Just staying in one place.”

A 25-year-old Phnom Penh resident who didn’t want to give his name said his experience in April at the Koh Pich quarantine center was just as it looked in photos on Facebook: crowded and boring.

“On the first day, it was difficult for me to adapt to a new place with so many people surrounding [me]. I felt stressed and annoyed. But I could call my family and friends to help with my boredom,” he said.

He said the treatment center seemed understaffed for the amount of patients in each room, and doctors would only arrive if he and other patients said they were very sick, to bring drugs like paracetamol. The man said his symptoms weren’t severe and he was released from the center, which he described as noisy, after 17 days.

Sotherith, the recovered Covid-19 patient in Kampong Cham, said he too panicked after receiving his diagnosis, unable to eat or sleep in the testing center.

“I can say I had been depressed during my stay at the center. But when I saw patients recovering from Covid-19 at the center, I felt much better,” he said.

The doctors were also aware that patients may be depressed by the quarantine centers, and made sure he and others had time to exercise and turned on music to allow everyone to dance. Sotherith said he also found inner peace from listening to the words of Kou Sopheap, a Phnom Penh-based monk who posts meditative speeches about withstanding pain and easing a busy mind on his Facebook page.

“After about five days, I accepted the truth and was encouraged.”