In Rural Mondulkiri, Teachers Fear Poorer Students Have Fallen Behind 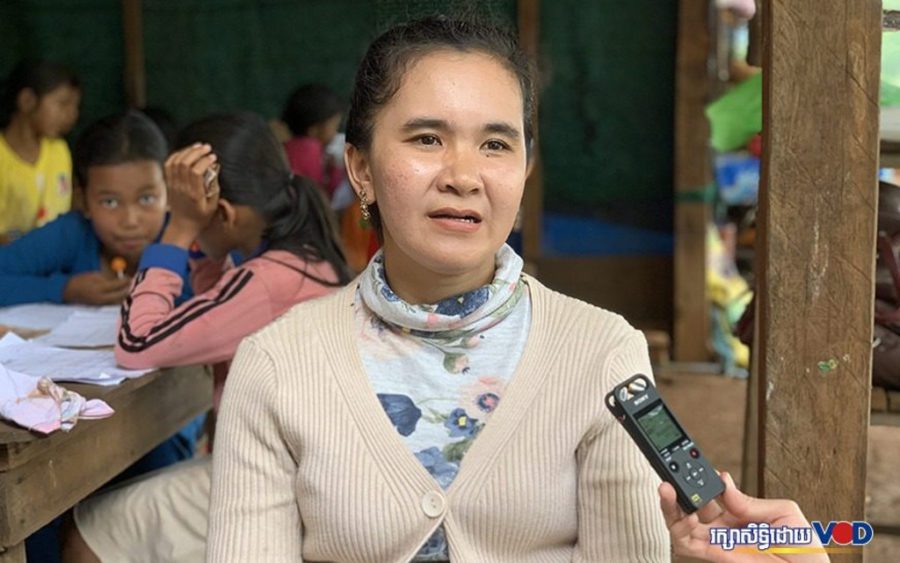 Her students could keep up with the mathematics course, and maybe even outpace them, but the Khmer lessons moved too quickly for her students, the majority of whom are ethnically Bunong and often speak the indigenous group’s language at home.

“It’s only the outstanding students who are well caught up,” she told VOD.

But the greater challenge is access: Only 10 of her 30 students have television sets and are able to watch the ministry’s programming.

When the Education Ministry ordered schools to shutter classrooms during the Covid-19 pandemic and put their lessons on screens, teachers in the remote and sparsely populated Mondulkiri province arranged small group study sessions, often in their own homes, trying to keep at least a portion of their students learning.

But many students spent the time they had off working on farms. After nearly six months, school staff said there would be catching up to do as classrooms reopen on Monday.

The sixth grade student said he has not studied digitally, only joining classes when a teacher would wrangle them together.

In Bosra, Phy Ket, a 39-year-old mother of five, said her two school-aged children would not get an education if it were not for group study sessions organized three times a week at her neighbor’s home.

“I don’t know. I can only encourage them to study,” she said. “If a teacher comes to teach, they get some knowledge. If the teacher doesn’t come, I don’t know how to [teach them] because I am illiterate.”

Sonith, who has taught for 11 years, said she traveled between students’ houses, asking their parents if the students could attend the study sessions.

As more students rejoined the small group lessons, Sonith said she began to run out of socially-distant spaces for the children to sit, as well as soap and alcohol-based hand sanitizer.

“Before they start studying, I tell them to wash their hands with soap,” she said.

The other children work in the field, and only a quarter of students’ families have mobile phones, so he has struggled to recruit them. When asked about his efforts, the primary school teacher laughed.

“At first, there were just a few students and I reached out to [people in] the village,” he said. “Finally I got this amount. It has been very difficult. The first challenge is that we go to tell students [about the classes] but do not see them. I suggest reopening [schools] as soon as possible.”

Touch Sarin, the director of Sreu Kleng, said that the school closures and the greater economic downturn seen in both urban and rural areas have wedged a greater divide between the capabilities of the wealthy and poor students. Of the 766 students at his school, he estimates only 30 to 40 percent have the equipment and connectivity to actually study online, and many of the children’s parents either don’t know how to use the technology or have minimal education themselves.

“My perception is this era is more modern, but now students’ families are impacted financially, and they have low budgets to buy [technology],” he said. “If the parents are prosperous, we can [teach digitally]! For poor families, it is difficult. … Their last option is group learning.”

The Education Ministry late last month allowed primary and secondary schools in Mondulkiri, Stung Treng, Kratie and Ratanakiri province to reopen on a shortened schedule, with the requirement that they have preventative measures in place. Mondulkiri’s provincial director of education, Tith Songvath, said the schools have been inspected and meet health and safety measures set by the Health and Education ministries.

Lim Sonita, Putang school’s principal, said she was preparing classrooms so students can sit apart from each other, and she had allocated some budget toward hand sanitizer and soap, but she was not sure it would be enough for all the returning students.

Sarin, the director of Sreu Kleng, said he expected that some students have fallen behind the curriculum since they last attended.

“We may have an assessment test when we return to the school,” he said. “If they fail, maybe we will have a supplement program for them.”

“We will just set up the training time so the students can have a little foundation,” he added. “We can test him again, but if he does not pass the test, maybe we have to freeze him [in a grade] below.