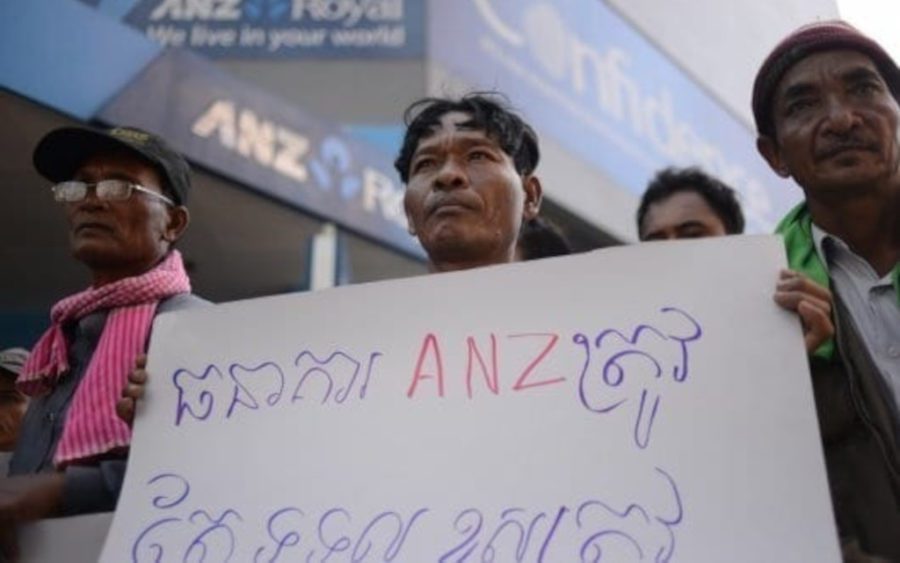 Kampong Speu villagers protest outside the ANZ Bank headquarters in Phnom Penh in 2013, from a photo posted to Inclusive Development International’s webpage.

Australia’s ANZ bank has returned its profits from its investment in a Cambodian “blood sugar” plantation to victim families who faced violent, forced evictions and child labor.

It’s the first time a commercial bank has provided compensation to individuals and communities harmed by the activities of a lending customer, said Inclusive Development International, an international NGO involved in facilitating ANZ’s compensation to families.

“This is a watershed moment, because it sets a precedent for the responsibility of banks to contribute to remedy when they have contributed to harms,” communications manager Mignon Lamia said.

The exact amount of compensation is confidential, but it is equivalent to the gross profit that ANZ earned on its loan to Phnom Penh Sugar, Lamia said.

Phnom Penh Sugar, in Kampong Speu province, is owned by notorious tycoon and ruling party senator Ly Yong Phat. Since 2010, more than 1,000 families were forcibly evicted, and heavily armed troops deployed to quell ensuing protests. It became one of Cambodia’s sugar plantations fingered in a campaign against “blood sugar” exports to the E.U. The plantation also faced accusations of child labor.

“With this money, the more than one thousand families forcibly evicted from their land by Phnom Penh Sugar are rebuilding,” Eang Vuthy, executive director of Equitable Cambodia, said in the statement. “It doesn’t undo the years of suffering they’ve endured, but it is a significant help to families in getting back on their feet after many years.”

Vuthy noted that disputes were continuing over the land.

The two NGOs filed a complaint against ANZ on behalf of the victim families to AusNCP, the Australian government’s body to resolve claims of corporate misconduct.

The complaint detailed widespread human rights violations on the part of ANZ’s former customer Phnom Penh Sugar and argued that ANZ had contributed to and profited from those activities through its loan to the company, the NGOs said.

It was only the third known time in the 20-year history of the system, out of more than 330 cases filed by communities and NGOs, that a complaint process had resulted in a concrete financial remedy for complainants, they said.

“Now that ANZ has shown that banks can contribute to remedy and make a tangible, positive difference in the lives of affected people without the sky falling in for their business, we expect to see other banks follow suit,” said Natalie Bugalski, legal director of Inclusive Development International.