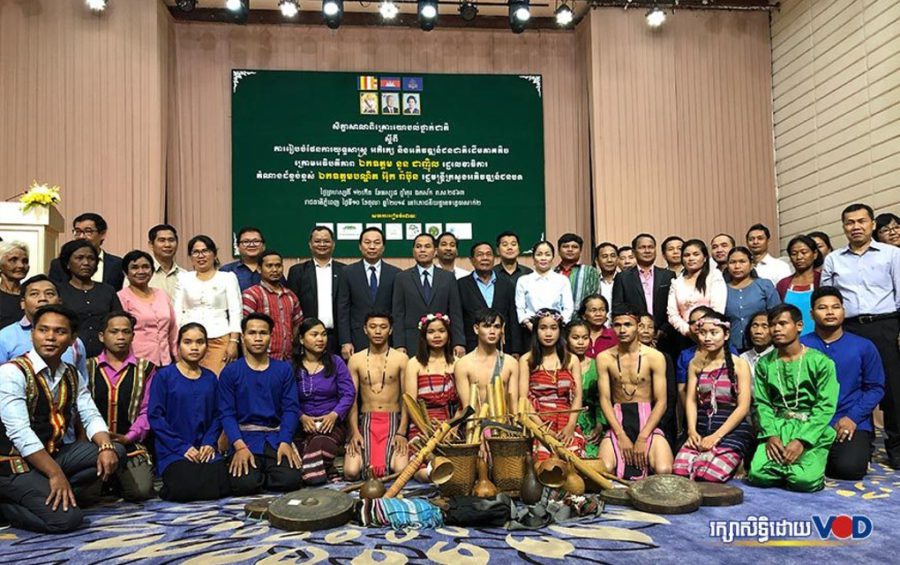 Representatives of indigenous communities, NGOs and the Rural Development Ministry gather for a workshop in Phnom Penh on October 10, 2019. (Khun Vanda)

The registration of communal land for indigenous people has lagged — with just 24 of an estimated 455 communities receiving titles — due to inadequate funding and other challenges, NGO and government officials said.

Speaking at a Phnom Penh workshop on Thursday, NGO Forum’s land and forestry program manager Pheap Sophea said one of the key challenges was that many indigenous areas overlapped with protected forests and other conservation areas or economic land concessions, creating competing claims.

“Ethnic minorities rely on natural resources to live, and when such natural resource management areas have already been set, it makes their land registration impossible,” Sophea said.

According to a 2009 sub-decree, the communal land registration process consists of three steps:

Daniel acknowledged that there were still some challenges to be solved to speed up the recognition of indigenous communities, including a lack of funds.

“We have to mainly think that even if we have a clear plan and clear strategy, we also have to think deeply about the issue of funds,” he said.

An indigenous Kuy representative from Preah Vihear province’s Tbeng Meanchey district, Tep Tim, said that many communities were struggling with their livelihoods due to loss of land.

Many survived on harvesting various resources from the forest, and forest areas were dwindling, Tim said.

Communities were worried that if they did not quickly receive communal titles, rich and powerful landowners would further encroach on the forests, she said.

“I am worried by the ministry’s claim of lacking funds, and I hope the ministry will pay attention to the process of registration for indigenous communal land,” Tim said. “Once the land is registered, indigenous communities’ land will be safe, preventing outside people — rich people and powerful people — from grabbing the land.”

“Once we are legally registered, not one will dare to touch it,” she said.

A Rural Development Ministry report released during Thursday’s workshop said Cambodia has 24 different indigenous and ethnic minority groups in 15 provinces, making up about 1.34 percent of the total population.