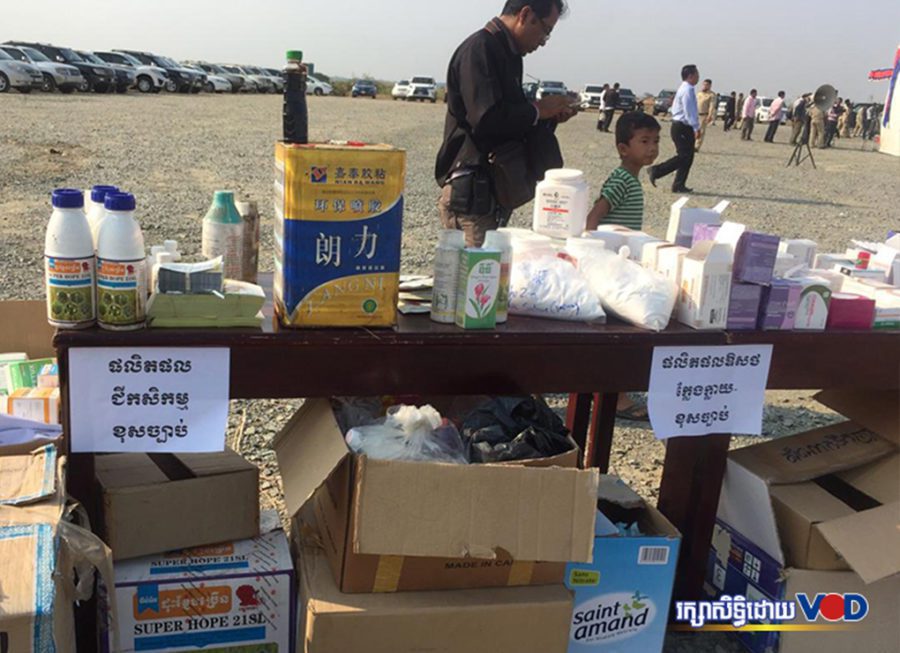 Interior Minister Sar Kheng has issued a blunt warning that he will not longer attend ceremonies to burn counterfeit goods if no one is arrested over those goods.

Speaking at a ceremony to burn counterfeit products on Tuesday, Kheng bemoaned that his authorities had recently confiscated some 60 tons of fake or “bad quality” products and illegal goods during a crackdown, but that there were no arrests.

“If you don’t arrest the owners, I won’t come to destroy [the goods] anymore,” Kheng announced. “Be clear about my conditions, because this issue won’t finish. It won’t finish. It’s just blowing smoke again and again—so when will it finish?”

During the ceremony, Interior Ministry officials destroyed nearly 6,000 boxes of fake pure drinking water, including fake boxes of Evian, Saint Amanda and Montcalm, as well as 106 different types of fake medicines and and eight tons of fertilizer.

The ministry’s Cambodian Counter Counterfeit Committee (CCCC) president Meach Sophana said that a team of experts were continuing the anti-counterfeit product crackdown and were investigating places where fake goods were seized in order to help find producers.

Sophana said that he believed CCCC officials should be given arrest powers and that the penalties for producing or distributing fake goods should be made more severe.

“We will increase our activities, and we have asked if we can make an arrest as competent officers but this requires permission and instruction from the court,” he said.

Yong Kim Eng, the president of the People Center for Development and Peace, a grassroots development organization, said that he also believed the legal system had to adopt a stronger approach to punishing counterfeiters to stamp out the problem.

“What we want to is first to change the judicial system. [Ending counterfeiting] will only be possible when the judges and prosecutors in the judicial system have a very strong will for bringing justice, peace and order for society,” he said.