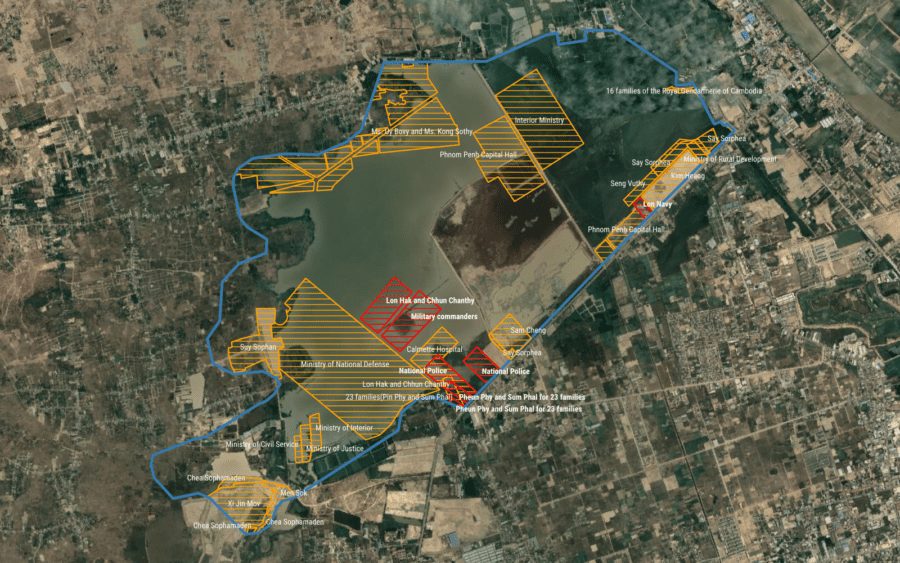 Prime Minister Hun Sen granted the Interior Ministry permission to sell 100 hectares of Boeng Tamok lake that it was granted earlier this year so the ministry can fund a reconstruction of its existing office building.

In a letter issued August 25, Hun Sen created a committee that would assist the Interior Ministry in finding potential business partners who would buy the 100 hectares of land it was granted via a government sub-decree signed on August 5.

The committee would be required to measure and inspect the 100 hectares, appraise the land’s value, and finally individuals, companies or other private sector actors who could purchase the total area.

The proceeds from this sale would then be used to build a new Interior Ministry office building on its existing site and write a report of the procedure to higher officials. This committee will include six people, according to the letter: the Phnom Penh governor as committee chair, plus officials from Phnom Penh City Hall and the Finance and Interior ministries.  Phnom Penh governor Khuong Sreng declined to comment.

The letter also gives the sub-committee permission to “examine and solve other necessary work related to the area of ​​100 hectares.”

Satellite imagery captured by the European Space Agency’s Sentinel-2 in mid-September suggests the 100 hectares is underwater and on the eastern side of a road carved into the lake.

Interior Ministry spokesperson Khieu Sopheak confirmed the ministry would rebuild its office on the current site — on Norodom Boulevard, due south of the renovated Cambodian People’s Party building. He said the ministry would not use government money to rebuild the office, but still intended to start construction by November or December this year using money raised from the land.

Kim Heang, CEO of Khmer Real Estate Co. in Phnom Penh, said it was hard to estimate a value for the land granted in Boeng Tamok because it would depend on the land’s condition.

Those who have land around the lake are pricing it for $200 to $300 per square meter — which would come out to $2 to $3 million per hectare — but he said many have struggled to sell their land. Just a few years before, land south of Street 130, which runs along the lake’s northern border, could sell for $30 to $40 per square meter, he added.